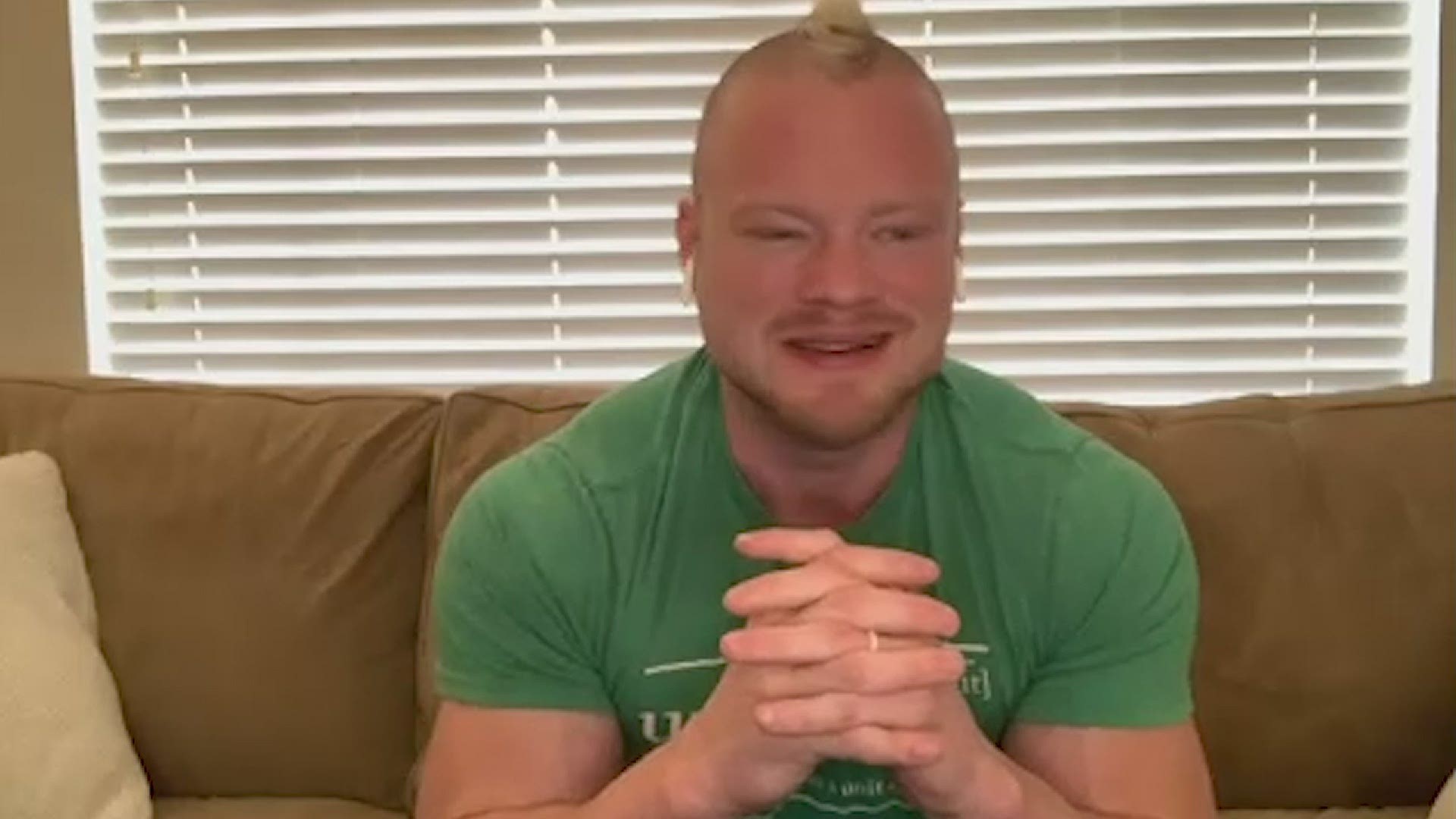 Tomorrow, 32-year-old Nick Wehry will train for work: go outside, set up his table and drink mixes, plate some hotdogs, and consume them as fast as possible.

This is a day in the life of a competition eater.

“Everybody kind of starts differently, I guess. You know, Miki and I always make the joke, we didn't find competitive eating, it found us,” Wehry said.

This year, as he has done since his debut in 2018, Wehry will compete in the famous Nathan’s 4th of July  Hot Dog Eating Contest held on Coney Island. Wehry is ranked 6th in the world in competitive eating.

In 2018, Wehry came in tenth, eating 31 hot dogs in ten minutes. The next year he took sixth with 36 hot dogs. In 2020, Wehry came in third in the Nathan’s contest, eating 39.5 hot dogs. He also holds a personal record of 50 hardboiled eggs in three minutes and four seconds.

“My appetite kind of became a running joke amongst my friends. So they were like, hey, you should enter this Paczki eating contest, like the Polish jelly doughnuts, thrown on Fat Tuesday,” Wehry said. 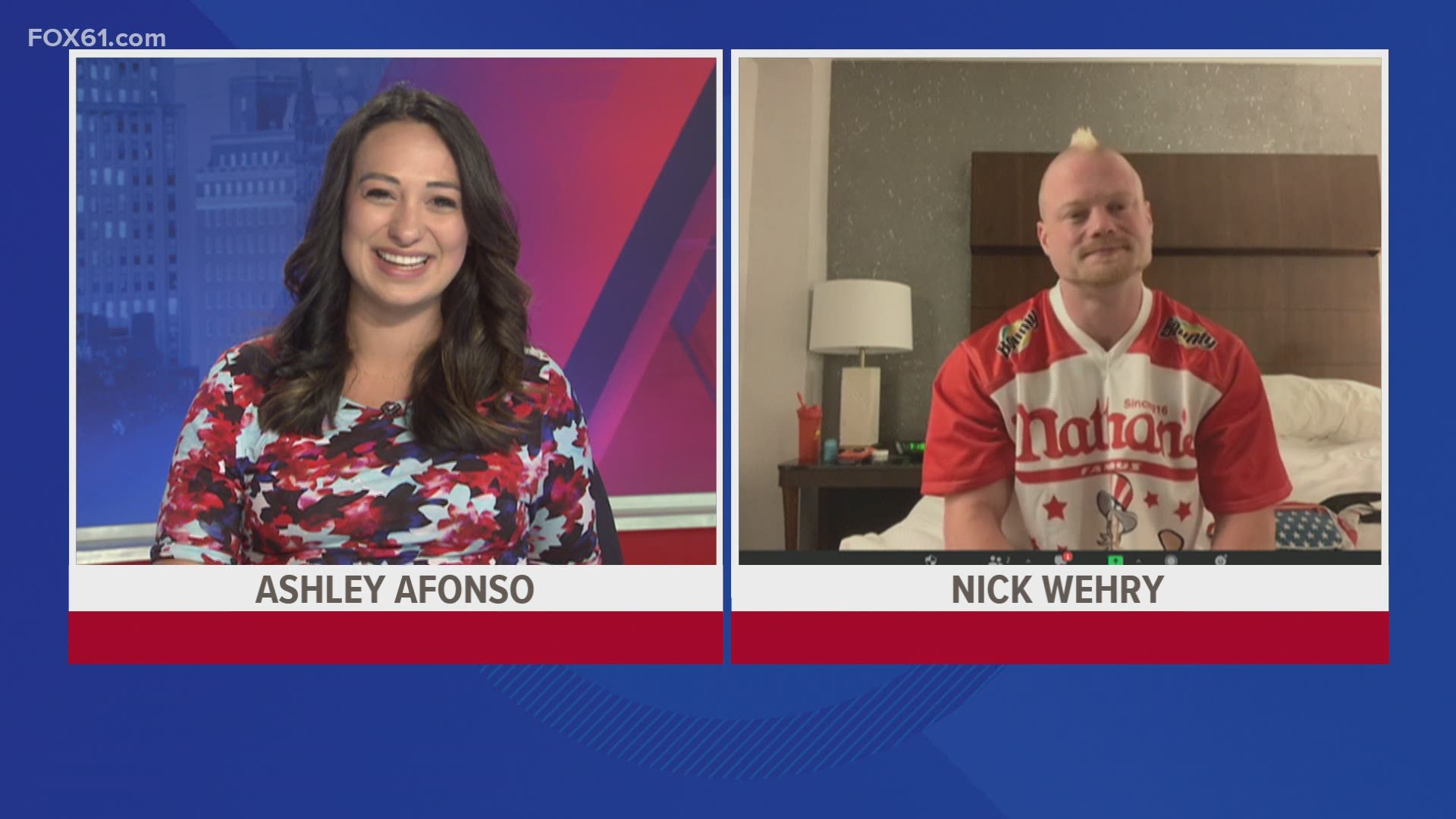 He entered the contest, held at Eddie’s Bake Shop in Ansonia, and won. He went on to enter more contests and win those as well.

“Since then, it's kind of spiraled out of control to where I'm ranked sixth in the world,” Wehry said. His rankings have gone up steadily in the years since. His fiancé, Miki Sudo, is ranked fifth.

“I'm not even the best eater in my own house, which is somewhat irritating. But at the same time, it's pretty cool, and I don't plan on slowing that ascension anytime soon,” Wehry said.

“I always tell people, if you're going to take a vacation cross country, if you budget for that vacation ahead of time leading up to and after, it's not going to break you financially. If you don't, you will have a very big problem. And that's very much how it is with calories,” he said.

RELATED: Fireworks and 4th of July celebrations return to Connecticut

His motivation for competition? Winning is fun.

“Not winning isn't very fun. And I hate to lose more than I like to win,” Wehry said. “With eating, when I got into it, I kind of found I had somewhat of a gift for it. It's a lot of fun to be able to push forward and progress at a high level. The ridiculousness of what we do is not lost on us, you know, traveling the world eating 60 moon pies at a time or 17 pounds of protein, but it's still something done in an elite level that I think is much more difficult than most people can fathom.”

The crowds are a motivator, too. The energy is infectious, Wehry said.

“There are thousands of people screaming for you, or against you. There's this just bound up almost kinetic energy that you can feed off of that when you're 40 odd hotdogs deep, and the last thing you want to do is eat another hot dog or bun. You know, you're on the most-watched program on the Fourth of July. There are millions of people watching you at home, there are thousands of people watching you there. And you can kind of just bear down,” Wehry said.

Outside the world of competitive eating, Wehry is a father of two with a third on the way.

“My Clark Kent outside of my eating would just be you know, a father of two expecting a third,” he said. “I'm just an average dad that can eat copious amounts more than another dad.”

Wehry wasn’t always a competition eater. He was a competitive bodybuilder for ten to 11 years, and he now works as a professional trainer. Formerly a Torrington resident, Wehry now lives in Tampa, FL.

RELATED: Here are the five gymnasts representing the US in men's gymnastics in Tokyo

Wehry said he’s always been interested in answering the question, what can the human body do?

The idea of “pushing the limits” translates from his bodybuilding career to professional eating.

“What can I change? What can I do? This is individually about me, and how much work I can put in. And then, just how hard can I bang my head against that wall and see if I can break it down,” Wehry said.

As fun as winning and pushing boundaries are, that’s not all the competitions are about.

“I think people have misconceptions sometimes about like, we get comments about, you know, the gluttony or the waste or things like that,” Wehry said. “People don't realize what we do. Like Nathan’s this year, as they do virtually every year for the past handful, they donate 100,000 hotdogs on the Fourth of July to food banks. We donate every year to Feeding America. We will be doing that again this year for hotdogs that I eat. We raise money that way. There's a backside to this sport that nobody really sees. As absurd as our talents are, we try to use them for as much good as possible.”

Wehry will compete in the 2021 competition on July 4 at 11 a.m. The contest will air on ESPN’s livecast.