Is your facemask protecting you?

The coronavirus pandemic sent individuals, companies and even whole countries scrambling to buy up scarce masks. Some are counterfeit. 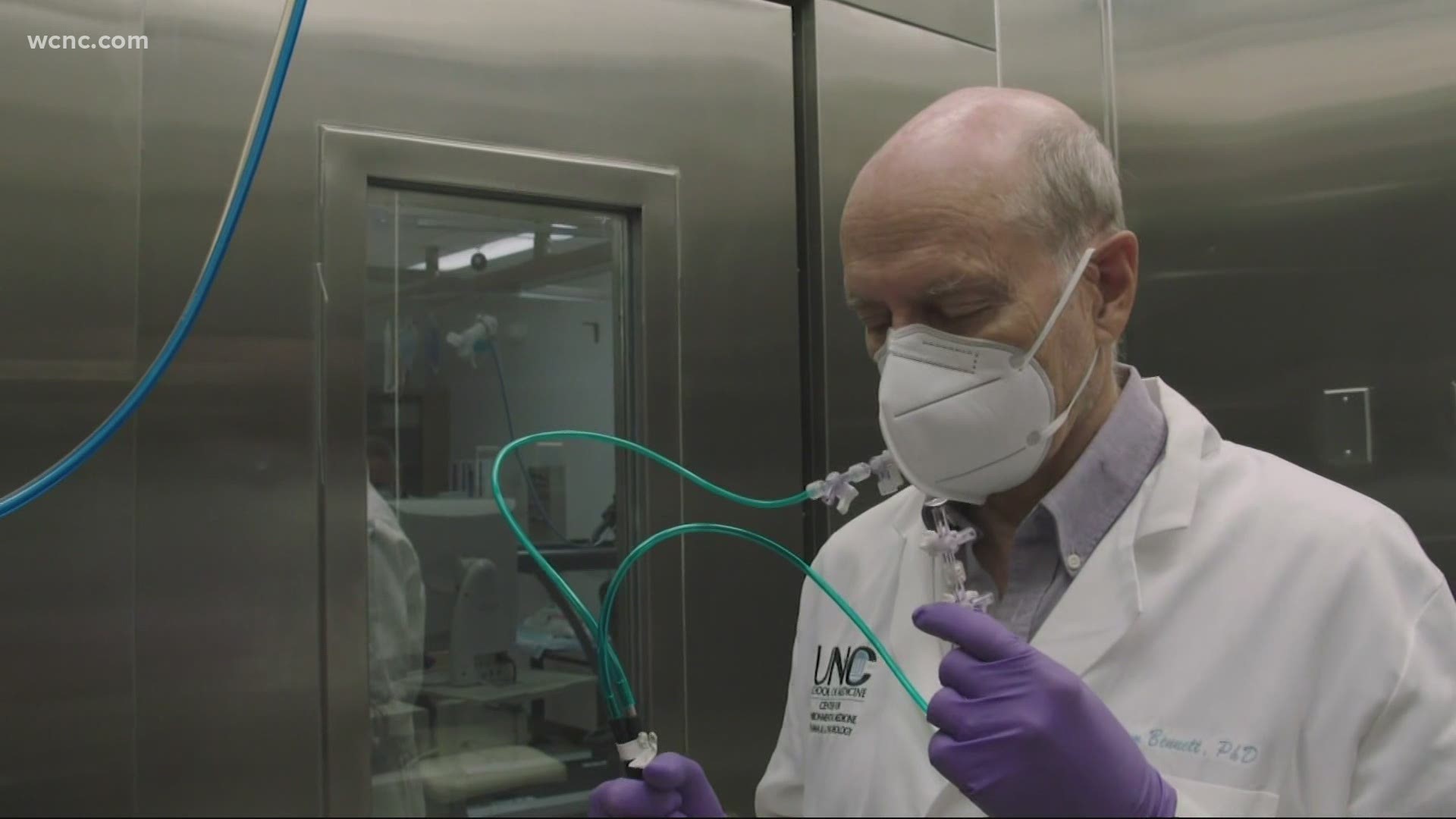 CHAPEL HILL, N.C. — The Associated Press tested facemasks here in North Carolina and the results were "most are fakes."

The box said the N95 masks inside met the standards set by the National Institute for Occupational Safety and Health. That means they're supposed to filter out 95% of dangerous particles from the air.

"This one, we've never seen go above 75% effectiveness," said Phillip Clapp, a researcher at the University of North Carolina's Center for Environmental Medicine, Asthma and Lung Biology.

That's because it is a counterfeit.

The coronavirus pandemic sent individuals, companies and even whole countries scrambling to buy up scarce masks and other critical medical supplies. Because so much of that is manufactured in China, where the pandemic began, the United States was caught largely unprepared.

For the past seven months, The Associated Press, Frontline and the Global Reporting Centre have been investigating how the country's medical supply chains broke down.

"Link after link failed," said AP national investigative reporter Martha Mendoza. "And that catastrophic collapse is, perhaps, the most consequential failure of the United States effort to battle COVID-19. It explains why there's a higher rate of death in this country than almost any other country in the world. And it was not unexpected."

Another side effect of the pandemic: Massive fraud.

Following one shoot, reporters noticed that an international charity had received a shipment of fake N95 respirators from China.

"Probably our biggest surprise in this pandemic has been that counterfeiting issue," said Denise Rutherford, a spokeswoman for 3M.

People and groups were donating masks to frontline medical workers, so the AP asked for examples. The masks were then sent to UNC in Chapel Hill, North Carolina, for testing.

Clapp said the masks didn't stand up to scrutiny.

"Everything we've seen here is a counterfeit of sorts," he said from a lab inside the U.S. Environmental Protection Agency's Human Studies Facility on campus.

Some of the fakes were obvious and easy to spot. Like the supposed NIOSH-approved N95's, which are supposed to have straps that go over the head.

"Currently, NIOSH doesn't certify any ear-loop mask or respirator at this level," Clapp said, stretching the elastic in his hands. "So, if you see anything that's clearly labeled as NIOSH N95 and it has ear loops, that's a dead giveaway that it's a counterfeit product."

For others, Clapp spent hours online, researching certification codes, batch numbers, even comparing fonts and styles of logos and label designs to determine whether they were legit.

But it was the testing that revealed how dangerous this fraud can be.

After fitting the masks with metal stems, a member of the UNC team enters an air chamber filled with charged particles.

"This allows us to connect a particle counter to the space and measure the particles that are penetrating behind the breathing or into the breathing space," said Clapp.

The person in the chamber was then ordered to run through a series of activities, designed by the U.S. Occupational Safety and Health Administration, meant to mimic the range of motions a typical worker might perform.

"Bending at the waist, reading aloud, looking left and looking right, and then looking up and down," said Clapp.

While some of the fakes did well in the tests, most did not. Some of them only achieved percent efficiency ratings in the mid-30s.

In a pandemic, numbers like those could mean the difference between life and death.

"If you're in an operating room and you're using equipment that's not doing its job, you may be highly vulnerable," said Steven Merrill, the FBI's Chief of Financial Crimes. "And that's something that scares us and that's why we investigate these cases."

The AP also sent Clapp one of the Chinese-made masks it bought for its own staff. Turns out, it was a fake.

"We actually saw that it only worked at 35% efficiency," said Clapp.
The manufacturers and distributors did not respond to requests for comment.

Once alerted to the problem, AP found a new supplier and sent affected employees new masks.