Heart-stopping footage shows Sid, a pitbull, submerged under layers of ice for over a minute. His owner broke through it with her bare hands to save him. 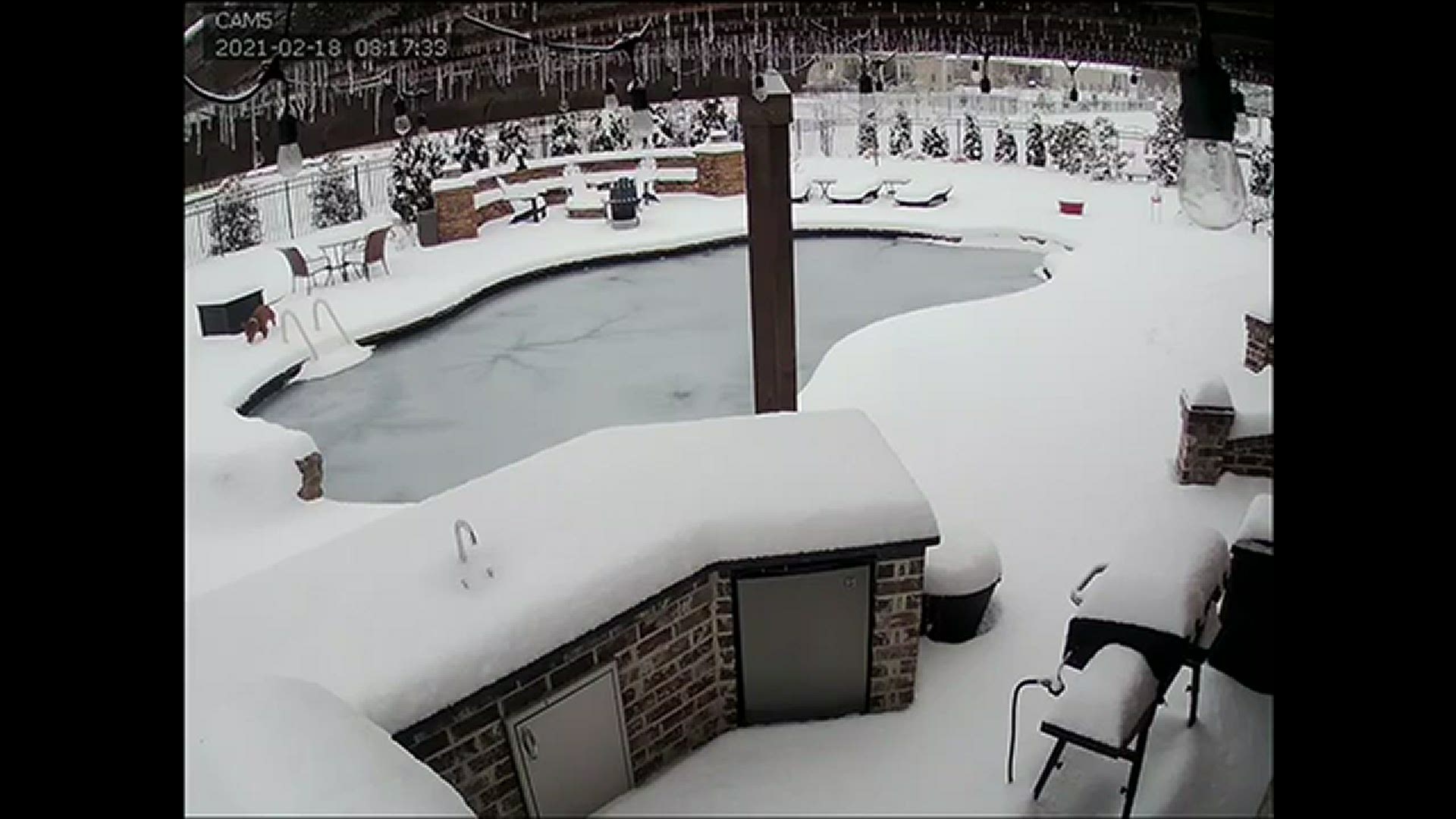 MURFREESBORO, Tenn. — Jennie Esker Tatum rescued Sid the pitbull five years ago when he was abandoned in her Murfreesboro neighborhood.

Last week, she saved his life again - diving through icy waters and pulling the pup to safety after he fell into their pool.

Distressful footage shows Sid playing in the family's backyard with their goldendoodle, Olaf.

As middle Tennessee saw record snowfall, the dogs took the rare opportunity to play in the snow.

The family's water pump broke just the week before, freezing a pool which would have normally been filled with water.

"They'd never really seen that much snow..they were just doing their thing," she said.

That, coupled with the snowfall, spelled disaster for Sid.

He took a misstep and feel through the ice.

Esker Tatum, who had been watching her dogs play through a window, is shown coming to his aid immediately.

"All I could think of is, I knew he would maybe struggle...get in there," Esker Tatum said.

She jumped into the frozen pool, breaking through layers of ice with her bare hands to get through to him.

"I never would have though that this would have gone this way," Esker Tatum said. "I started clearing and digging through the ice, but I didn't see him."

After several seconds of breaking the ice, Sid still did not resurface. At that point, Esker Tatum got out to see where he was.

Finally, she spotted a brown mass  underneath the ice. Sid was trapped, and had floated to the top of the ice.

He had been underwater for nearly a minute by that time.

"I just wanted my hands on him, to get him out of the water," she said.

Her arms finally wrapped around him.

At fifty pounds, it was not an easy task to hoist Sid from the water. When she finally did get his body onto the snow, the pit bull was totally limp.

She brought his near-lifeless body near their fireplace and began rubbing him. The cold she herself had experienced was irrelevant as she tried to get him to breathe.

"I don't even know how long I was in there...I had zero clue about being cold," she said.

In the chaos, Esker Tatum had thrown her phone in the snow. Her 10-year-old son was able to contact their neighbor, a veterinarian, who administered an emergency shot.

Credit: Jennie Tatum
Tatum eventually found Sid underneath the ice when she dove in a second time.

"She looked in his mouth, and his gums were purple. His tongue was purple. He started to go into shock when we started moving him to go to the vet," she said.

After a nearly thirty minute car ride, Sid did make it to a local vet clinic.

The veterinarians caring for him later told Esker Tatum they did not think he would make it.

Credit: Jennie Tatum
Jennie is seen carrying Sid to safety. He eventually made a full recovery.

"When you brought him in we did not think this would be the situation. But he's just doing fantastic. So very, very, very lucky," Esker Tatum said.

Esker Tatum said the experience opened her eyes to the dangers of dogs around ice. She hopes the now-viral video exposes others to how dangerous ice in general can be.

If the same thing were to happen again though, she knows exactly what to do.

"I would do it again, I would do it for anybody. I know people are saying, you're a hero. But it was honestly just the reaction to the situation," she said.

Sid is currently recovering at home with his family by his side.