The German women's gymnastic team at the Olympics wore longer unitards instead of the traditional bikini-cut leotard. 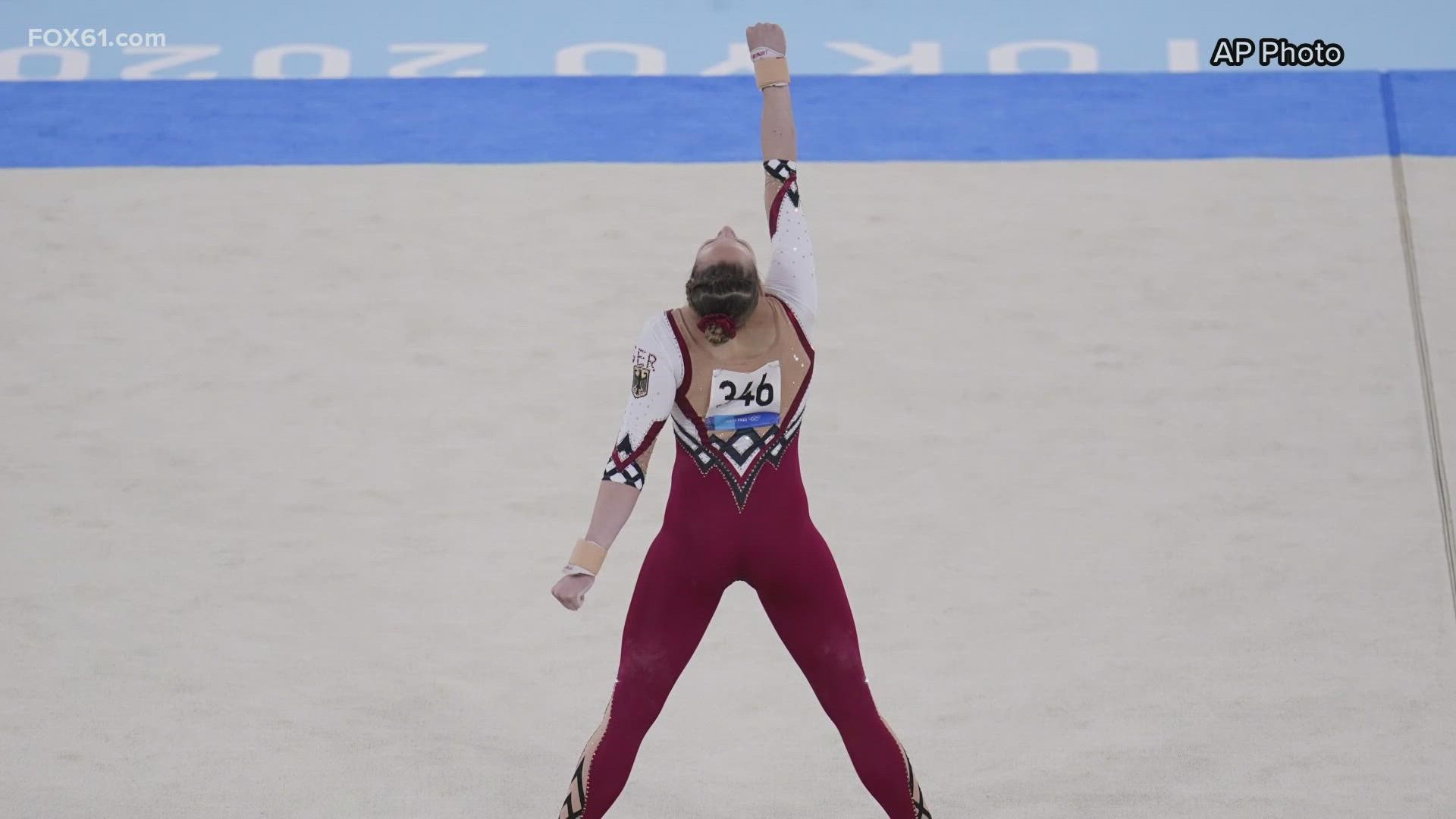 NEWINGTON, Conn. — Some women gymnasts are taking a stand, deciding how much, or how little, they want to expose while performing.

The German women's national gymnastics team at the Olympics dropped the traditional bikini-cut leotards and instead took up a different look: A full-body, leg-covering unitard, similar to their male counterparts.

Credit: AP
FILE - In this July 25, 2021, file photo, Pauline Schaefer-Betz, of Germany, performs her floor exercise routine during the women's artistic gymnastic qualifications at the 2020 Summer Olympics, in Tokyo. The German gymnastics team wore full-legged unitards that went down to their ankles, eschewing the traditional bikini cut that ends high on the hip. The athletes said they were trying to combat the sexualization of young women and girls in their sport, which is trying to recover from a decades-long sexual abuse scandal. (AP Photo/Gregory Bull, File)

Young gymnasts around the world took note, including those in Connecticut.

"I was kind of excited to see how they're changing the leotard and how they're really cool," said Emily Lagana, a 12-year-old gymnast in Newington.

Male gymnasts have long competed in singlets and short, or long, pants uniforms.

The German gymnastics federation said that the new uniforms were a statement "against the sexualization in gymnastics" adding that "the aim is to present aesthetically without feeling uncomfortable".

Thomara Powell-Brown, a coach at Newington's Aerials Gymnastics, said the sport can make young girls self-conscious of their bodies and thinks the new uniforms can help that.

"I think it makes them feel more comfortable in their own skin," Powell-Brown explained. "It's like walking around in a bathing suit but you're not at the beach, you're in gymnastics and judges are judging you. I know there's different shapes and sizes that come in gymnastics so I think all in all, mentally, it will make the gymnast feel better about themselves."

One of the issues is that during all the flips, tumbles, jumps, and splits, the leotard can shift and move out of place. But, during competitions, it's hands-off. No matter what happens with your uniform, you can't touch it. If you do, there will be a deduction to the gymnast's score.

“When you’re competing you can’t touch your leotard. You can’t fix it, so honestly, those types of leotards might be the best," said coach and gymnast Nicholle Denault when asked about the longer unitard uniform.

The Tokyo Olympics are the first summer games since Larry Nassar, a former USA Gymnastics team doctor, was convicted of sexually abusing hundreds of young gymnasts. He was sentenced to 176 years in prison.

Since his trial, many gymnasts have come forward saying the sport’s culture fostered abuse and objectification of young women.

Aerials' head coach Heather Whittier said the German team’s uniform change speaks volumes about what’s been happening in the sport and where it needs to go.

“Good for them for standing up for what’s going on in gymnastics. Someone had to make a stand," said Whittier. "I think we’re heading in the right direction with that.”

So will the bold move by the German team change the sport worldwide?

“I think absolutely," said Denault. "There will definitely be teams that make a change after what [the Germans] done.”

RELATED: Olympic photos from far above — and underwater