A look behind the reasons for the protests at the Harvard vs. Yale football game

NEW HAVEN — Hundreds of people stormed the field in the middle of the Harvard and Yale football game Saturday to protest the universities’ efforts to comb... 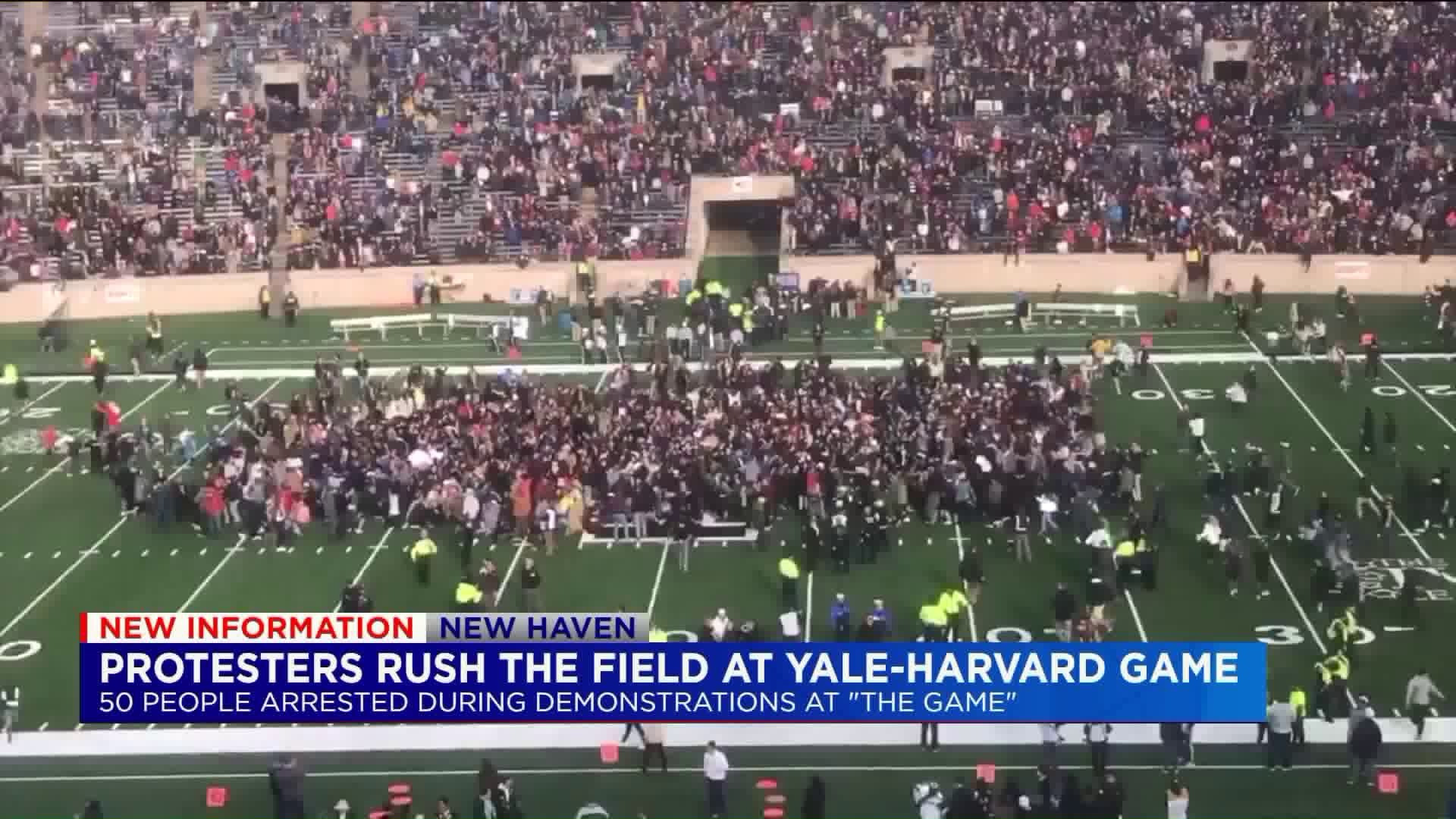 NEW HAVEN -- Hundreds of people stormed the field in the middle of the Harvard and Yale football game Saturday to protest the universities’ efforts to combat climate change.

#Nobodywins is the hashtag students at Yale and Harvard are using to bring attention to what they call Yale and Harvard’s complicity in the climate crisis. The move was as historic as the game itself, which dates back to 1875.

Saturday hundreds of people from both schools stormed the field during the Yale/Harvard game. Police arrested 48 people on disorderly conduct charges. Two more were charged with criminal trespass. One of those two was charged with interfering with a police officer.

According to their website, nobodywins2019, students say Harvard and Yale’s $71 billion dollar combined endowments are likely invested in fossil fuel companies fueling the climate crisis and the predatory holders of Puerto Rico’s debt. They say they are calling on Harvard and Yale to fully disclose, divest, and reinvest their holdings in the fossil fuel industry.

Yale University saying in a statement:

"Yale stands firmly for the right to free expression. Today, students from Harvard and Yale expressed their views and delayed the start of the second half of the football game. We stand with the Ivy League in its statement: “It is regrettable that the orchestrated protest came during a time when fellow students were participating in a collegiate career-defining contest and an annual tradition when thousands gather from around the world to enjoy and celebrate the storied traditions of both football programs and universities.”

We are grateful to the staff members and police officers who ensured the peaceful departure of students from the field. The exercise of free expression on campus is subject to general conditions, and we do not allow disruption of university events.

The event was widely recognized on social media by celebrities including Alyssa Milano, who says she supports the protest.

I’m proud to support the students of @DivestHarvard and @FossilFreeYale who disrupted #HarvardYale today to call for fossil fuel divestment.

When our richest universities are invested in the destruction of the planet #NobodyWins.

Even football players are speaking out in support of the protests.

“My name is Devon Moore, a senior on the Yale Football team, and I support the protest during the game yesterday,” said Yale defensive end, Devin Moore. “Yale and Harvard have a responsibility to divest from the fossil fuel industry and cancel Puerto Rican debt. Institutions with great influence need to set an example. This is an emergency and it’s time to act like it.”

“When it comes to the climate crisis, nobody wins,” said Harvard Captain, Wesley Ogsbury. “Harvard and Yale can`t really claim to promote knowledge while at the same time supporting the companies engaged in misleading the public, smearing academics and denying the truth. That`s why we are joining with our friends at Yale to call for change.”