Owner and Brewmaster Alisa Bowens-Mercado says her hope is to leave a legacy that changes the world and the beer industry, one sip at a time. 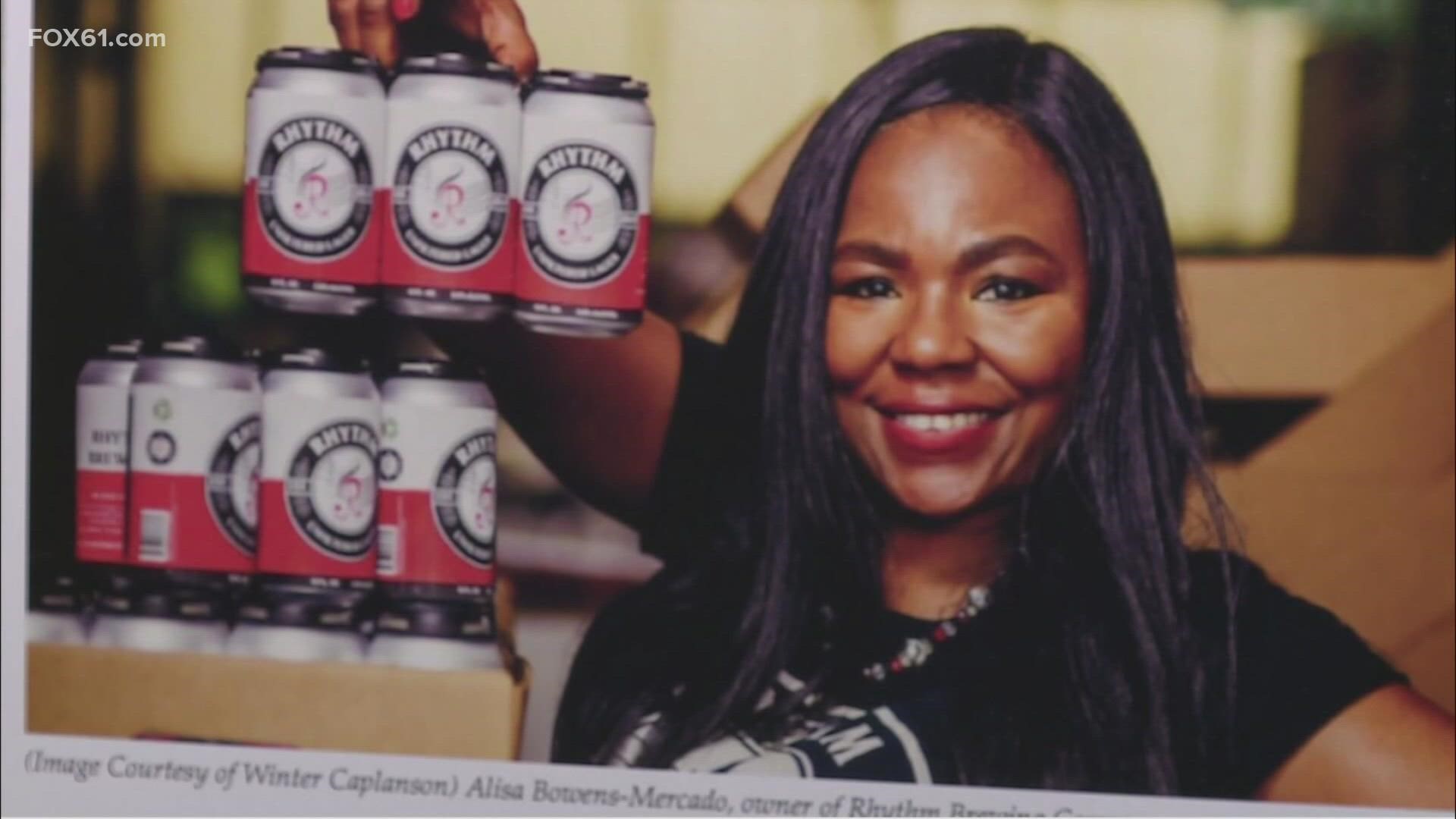 NEW HAVEN, Conn. — Black Business Month is underway and the CT Cultured team is continuing to shine a light on businesses across Connecticut with Black ownership.

This week, we learned about Rhythm Brewing Company, which is based in New Haven.

The company was established in 2017 with the goal of adding more craft lagers to the market.

Encouraging customers to 'find their rhythm with every sip,' owner and Brewmaster Alisa Bowens-Mercado knows just how to do that.

The entrepreneur has been a professional Salsa dance instructor for 20 years at her own studio Alisa's House of Salsa. She tapped into the brewing industry after realizing a lack of Black leadership.

Now, Rhythm Brewing Co. is the first Black and female-owned brewing company in the state of Connecticut and the fourth in the country.

The recipe is Bowens-Mercado’s own and includes hops from South Africa.

"I always say, this is bigger than me and a can of beer," Bowens-Mercado told FOX61. "Because it really is, this is about economics, it’s about Black business growth."

However, her interest in the industry was no random idea.

The self-proclaimed 'Lady Lager' said her journey with beer dates back to her childhood, in the 1970s.

"As a kid, I would see my grandmothers drink these cute little bottles of something, at that time I didn’t know what it was, but later in life found out it was beer," she said.

For Bowens-Mercado, Rhythm Brewing Co. was her way to continue her grandmothers' legacy.

She explained that while it may not have been fashionable for women to drink back in the day, times have changed.

"I'm able now in 2021 to tell the story that my grandmothers couldn't tell back in the 70s," Bowens-Mercado said. "And if that's through beer and the mission and journey I'm on, then I am ecstatic to be able to carry that torch and move forward."

And so, it began.

As a Black woman business owner in an industry historically dominated by white men, Bowens-Mercado said her mission - besides making a good beer - became opening up doors, employment opportunities and economic growth within the Black community.

RELATED: Hartford Foundation for Public Giving announces over $540,000 in grants to combat racism

According to her, that representation is deep.

When you represent a community that is underrepresented, and the person that is representing that community looks like you, that’s so powerful, she said.

"If there are little Black and brown boys and girls and adults that can see me representing the beer industry that is typically known as White and non-ethnic in general, I want to be that person," Bowens-Mercado added. "I want to be that voice and I want them to see the positive, but also to look at my journey and see where I've been and where I'm going."

Data released by the Brewers Association in 2019 revealed 88% of brewery owners from participating breweries were white; 4% were American Indian or Alaska Native owners; 2% were Asian and Hispanic owners and Black brewery owners stood at just 1%.

With a lack of Black involvement and ownership in the brewing industry, Bowens-Mercado said there's a massive market that the community is missing out on.

“The beer industry, it’s $114 billion and with that amount of consumption or sales, and people of color are only getting .0005% of that annual revenue, it just didn’t make sense to me,” she continued.

When asked if those statistics were discouraging, Bowens-Mercado quickly said no. For her, despite not having the same opportunities as her counterparts, she was motivated to create her own.

That's the essence of a Black entrepreneur, she added. But, venturing in and creating those opportunities is no small feat.

A significant barrier that Rhythm Brewing had to overcome was startup costs.

"A bank really didn't want to touch this," Bowens-Mercado said.

She said the company was able to get liquid into cans with the help of an angel investor, who saw her vision and passion to change the industry and communities at the same time.

RELATED: Brewing and bubblin’| Other Desi Beer Company offers a taste of India one sip at a time

The COVID-19 pandemic was another challenge that forced Rhythm Brewing to pivot, but overcoming adversity is nothing new for Bowens-Mercado.

"People like myself have always kind of been affected by some kind of pandemic," she added. "It might not have been a global pandemic, but we have had the bumps and bruises unlike other entrepreneurs."

Although it may be a struggle, breaking into the industry and launching Rhythm Brewing is something Bowens-Mercado said she wouldn't change.

Her experience is a display of the biggest piece of advice she has for other Black entrepreneurs: get into rooms that are not represented by you.

"If you walk into a room and you're the only one that looks like you in that room, you are in the right room," Bowens-Mercado said. "That's where change happens."

A change that was long overdue, according to the Lady Lager.

She's realized her dream of continuing her grandmothers' legacy and is now leaving her own as Rhythm Brewing is on a mission to become the first nationally distributed Black and female-owned beer company in the world.

Bowens-Mercado's story is forever etched in Connecticut's history, as she recently donated to the Permanent Collection of the New Haven Museum (NHM).

An assortment of artifacts documenting her two businesses will be on view in the Community Case in the NHM rotunda for the month of August.

Looking to support a Black-owned business? Click here for a growing directory of over 1,000 right here in Connecticut.