For Ravi Patel, a passion for making beer has blossomed into a business and outlet to teach Indian culture. 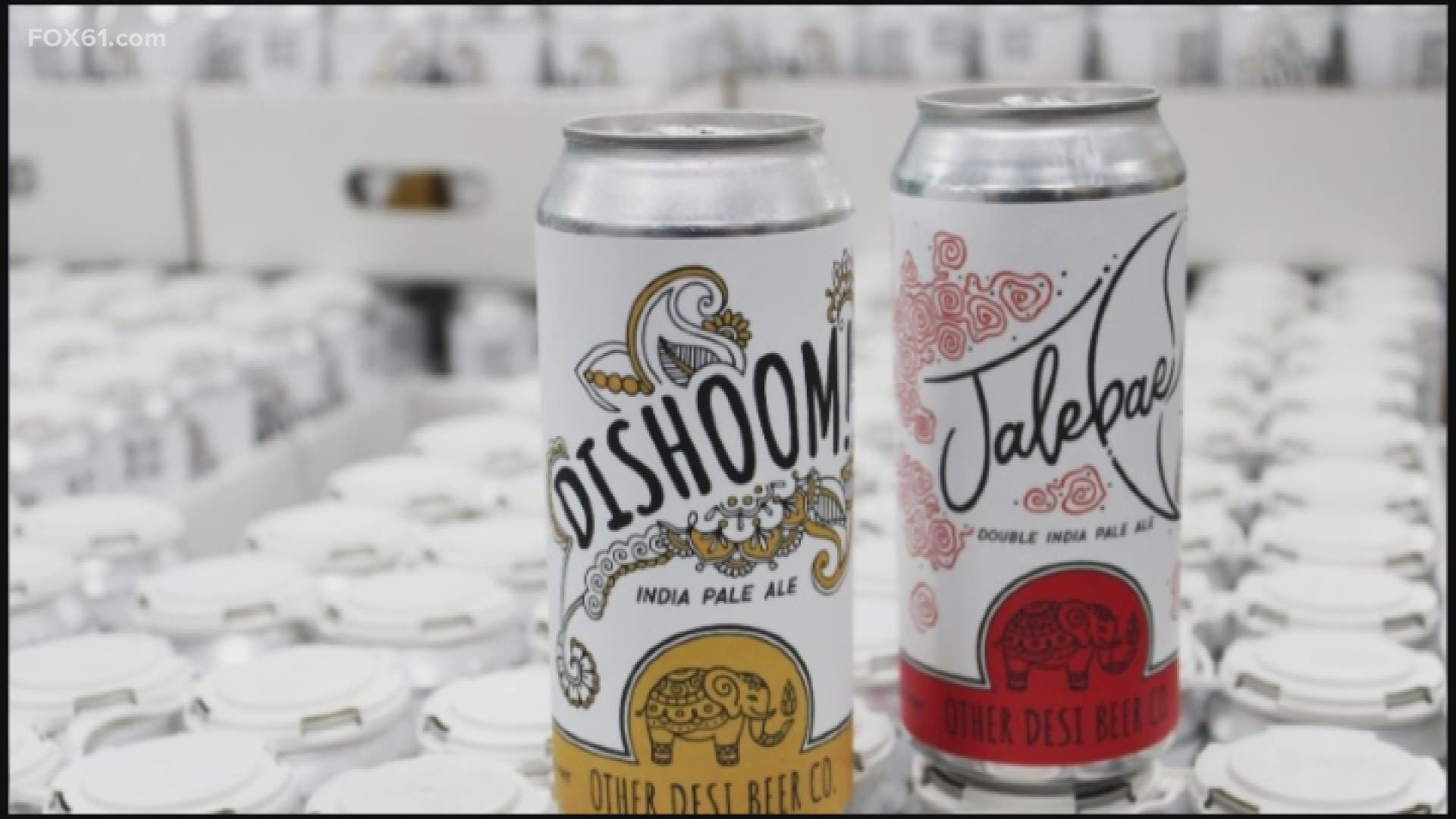 "We kinda hit it off, any good relationship requires a good partnership," said Gargano. "We got along real well. I kind of got the idea where he wanted to go with his brand, what he was looking to accomplish, and the synergies were there."

Patel has always had a passion for brewing, beginning from a young age.

While working in his parents' Grog Shop of Meriden package store, Patel always was more curious about what went into making the alcohol than stacking it on the shelves.

"I grew up working in that liquor store," said Patel. "I was always more interested in how the (alcohol) was made versus actually putting it on the shelf. My parents would tell me 'put away this Hennessy, put away this beer' and sitting there like how do they make this."

From there Patel went to Eastern Connecticut State University to major in economics and while exploring Willimantic one day discovered the Willimantic Brewing Company.

He said there was a small window at the bar that could look into the brewing area he would always try his best to get that one particular seat with the best view.

"I would always sit at that seat right in front of that window whenever I had a chance and watch them brewing beer," said Patel.

"I wanted to do something with this," said Patel. "I would always tell my friends, 'one day I am going to open up a brewery.' They thought I was crazy."

Through his love of brewing and a supportive family, Other Desi Brewing Company began in 2018 but did not produce its first brews until 2019. Its first beer was the Hoppy Hathi.

Patel says he tried to combine his Indian heritage with his beer, whether it be traditional Hindi ingredients and flavors or combining Hindi or Punjabi words with English ones.

Hathi is Hindi for an elephant, which is a symbol of peace in India.

However, it was not until his High Chai Stout that Patel was able to put in flavors of his heritage.

"(High Chai Stout) was actually the first beer I introduced some actual Indian flavors into my beer," said Patel. "It was stout that had Chai in it, so lots of spices, a lot of Black Tea."

Patel added, "There is Black Tea in it, cardamon, cinnamon, clove, black peppercorn, and mint and ginger."

Indian Tea Biscuits that he was able to secure from a friend's restaurant were also able to make the cut into this one beer.

Patel said the goal is to teach and highlight his culture while also break the generalizations of Indians in American society.

Patel says even the name, Other Desi Beer Co., has a deeper meaning than just a clever turn of phrase.

The word "desi" is Hindi for a person from India, Pakistan, Bangladesh who has lived abroad.

Patel said back in 2010, he and his friends were coming back from a New York Yankees game and met some people on the train.

At first, the men were friendly but as one of them got more drunk, they became racist.

The man eventually looked at Patel, put four fingers behind his head asking him if he was that kind of "Indian" and then moved his hand to point at his forehead, "this kind of Indian."

This is something that has stuck with Patel and eventually pushed him to use Other Desi as the name of his company.

Patel is a contract brewer which means he brews out of another brewery, in this case, Thimble island Brewing company in Branford.

Patel took a hit last year, like many breweries, bars, and restaurants during the height of the pandemic. With most packages stores closed to delivery only, it was hard for the business to grow.

With restrictions in Connecticut loosening even more now that the population is getting vaccinated, Patel is optimistic things will improve. His overall goal is to eventually open his own taproom.

Besides smashing through Indian stigmatism, Patel also uses the profits from his business to give back to the community. Every year, he gives 5% of his profits to a charity.

This year, appropriately, he is donating to the Connecticut Restaurant Foundation.

As Patel looks forward to the future of expanding his beer, he also looks to the future as well as inspiring other Indian Americans.

"There is a generalization of what (Indian-Americans) can be and I just want to see if I can maybe inspire somebody if they want to become an artist - or whatever they want to do," said Patel. "You're first-generation or second-generation Indian-American, South American here, go off and try to do that."

You can order your beer through Other Desi brewing, it's on tap at the Thimble Island, or ask your local package store.

Other Desi beer can be found in about 150 stores all over Connecticut along with some stores in the Philadelphia area.

Editor's note: Special thanks to Thimble Island Brewing for the brewing video provided.