In all, agents said they seized enough meth for an estimated 2.3 million individual 12-hour doses of the drug - worth $2 to $4 million. 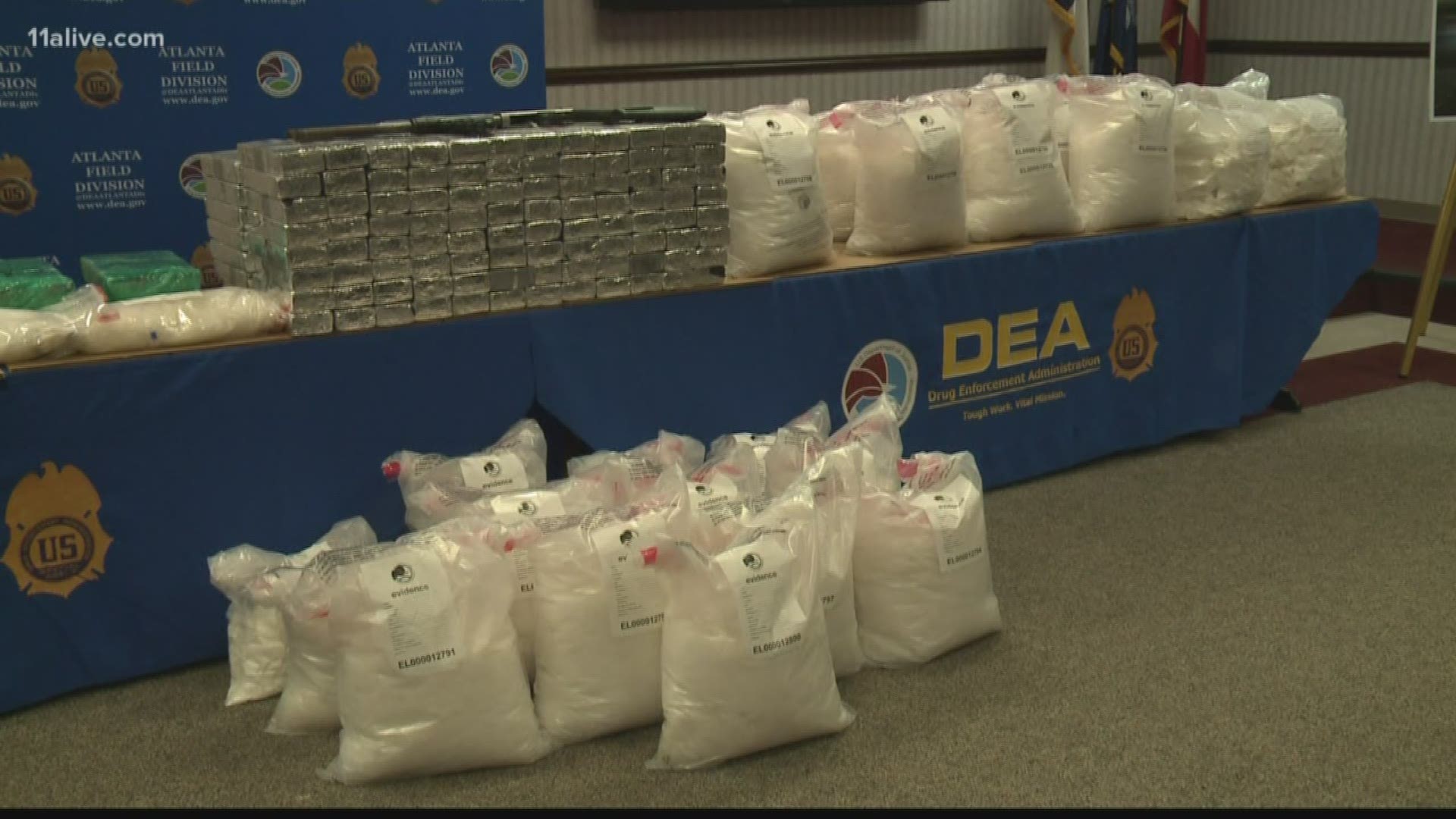 FOREST PARK, Ga. — In the fight to combat drug addiction in the United States, Drug Enforcement Agents announced some good news - a massive seizure of methamphetamine connected to a Mexican drug cartel, taken off the streets of Atlanta and out of the cartel's supply chain.

Multiple representatives from law enforcement agencies made the announcement Thursday, standing behind an impressive display of the latest drug seizure.

Agents explained it all unraveled when firefighters responded to a fire call at an apartment in Cobb County in early February. When they got there, however, investigators made a surprising discovery - a functioning meth lab where they uncovered dozens of "candles," that had stickers, proving they had been inspected at the Mexican border.

Except they weren't candles. Agents said they were wax pillars of hidden meth, undetected and smuggled across the south Texas border.

"They looked like perfectly commercial candles that you would buy," explained Robert J. Murphy, the special agent in charge for the Atlanta branch of the DEA.

Investigators would later discover that those candles were linked to another meth house in operation several counties away, on the south side of the metro area.

On Feb. 15, DEA agents responded to a home in the Forest Park area for a call, but they "had no idea what we were about to encounter."

Inside the home, described as an active meth lab, Murphy said they found 1,300 pounds of pure, finished crystal meth. An additional 100 gallons of "sludge" was also found, which Murphy estimated could be cooked down into an additional 500 to 700 pounds of meth.

In all, Murphy said they seized enough meth for an estimated 2.3 million individual 12-hour doses of the drug - worth $2 to $4 million. One person was arrested in connection to the bust.

"This is a staggering amount," Murphy said.

Murphy said they knew which cartel the drugs are linked to, and though they aren't publicly releasing it, they said the massive bust just underscores the problem law enforcement faces in the southeast.

The problem is especially prevalent in Atlanta, which Murphy said is a major entry point for meth trafficking because of "everything that makes it easy to do business here," including its highways, airport, high rental availability, and a population that cartel members can blend into.

That's why, spurred by the size of the bust, the DEA announced that they would be forming a new national effort to curb meth trafficking, called Operation Crystal Shield. The goal for the year-long drug operation, authorities said, is to disrupt the Mexican cartels' supply chain and operations throughout eight "hub cities" in the US, including Los Angeles, El Paso, Phoenix, Dallas, Houston St. Louis, New Orleans and Atlanta.

"This is a cat-and-mouse game that we play all the time," Murphy said. "This hurt, but it ain't gonna stop them."

Murphy explained that the cartels operating in Mexico have virtually "industrialized" the process of producing and distributing meth. Their ability to mass produce the drug has allowed for the cartels to reap the rewards. In 2018, Murphy estimated more than 40 tons of the drug was smuggled into the United Stats.

"What's scary to us is, you have an increase in purity and a decrease in price," he said, allowing the cartels to turn a huge profit.

But the economics are not the only concern for drug investigators and prosecutors. There are also significant health risks, too, according to Murphy. While investigators outlined they're seeing a decline in the number of addictions to opiates - including heroin and fentanyl - nationwide, here in the southeast, there are now more meth users than heroin users.

"Meth has never really gone away in the southeast," Murphy said. "Sadly, almost 1 million Americans today are addicted to meth, and, in some part of America, meth kills more Americans than any other class drug."

RELATED: He was hired as a state prison guard, but smuggled meth, other drugs to inmates

"The toll on the families and the youth is staggering. ... You have a whole generation addicted to drugs," Murphy said. "Once addicted to this, there's really no treatment. This becomes a behavioral problem. There's no other drug we can put you on to keep you from this."

Adding to the urgency, Murphy said their labs are now beginning to see meth being mixed with fentanyl - more than 80 to 100 times stronger than morphine, and potentially deadly.

"We're hoping that does not become a trend," he said.

Murphy said the only option now in order to reverse the dangerous trends with meth is to aggressively attack the problem at the source: in Mexico and in hub cities across the US, like Atlanta.

"We are going to attack them at known hubs," Murphy said. "That's our best place to target, and that's where we're going to."

Paulding Co. Sheriff: This is the largest amount of meth I've ever seen