Arbery, a Black man, was shot and killed on Feb. 23, 2020 while he was jogging through a south Georgia neighborhood when he was accosted by a white father and son. 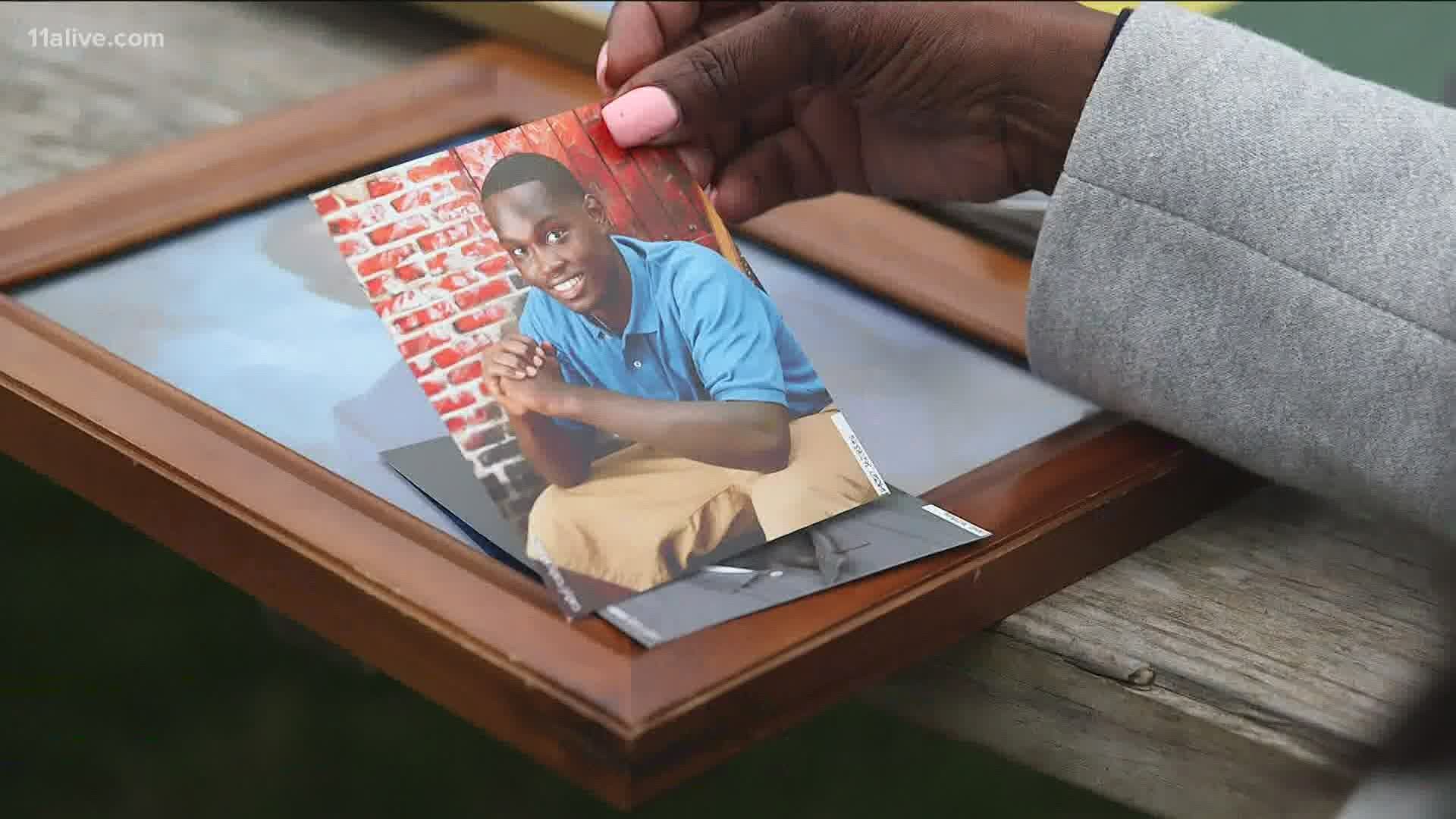 The three men accused in the killing of Ahmaud Arbery were indicted by a federal grand jury with hate crimes and the attempted kidnapping of the 25-year-old. The indictment also charges two of the three men with separate counts of using firearms during that crime of violence.

In a separate state proceeding, all three defendants have also been charged in a with malice murder, felony murder, aggravated assault, false imprisonment, and criminal attempt to commit a felony. No trial date has been set for the state case.

Arbery, a Black man, was shot and killed on Sunday, Feb. 23, 2020 while he was jogging through a south Georgia neighborhood when he was accosted by a white father and son. His death didn't gain national attention until months later in May, when a graphic cell phone video showing that deadly encounter surfaced online. From there, his life and death would leave a profound impact on the state of Georgia and the nation at large.

A federal lawsuit filed on the one-year anniversary of Arbery’s death claims the men who allegedly killed him violated his civil rights.

"Wanda [Arbery's mother] was really relieved to hear that these charges had gone forward and that the nation had not forgotten about her son and justice for her son," said Merritt.

"We want the conclusion of the criminal process to create so much accountability that people with hate in their heart, who think about targeting the Black community will have to think twice," said Merritt.

Here's a look back at what led to Wednesday's indictment.

Moments leading up to the encounter

Arbery was running through the Satilla Shores neighborhood in Glynn County, near Brunswick, on Feb. 23, 2020 when father and son Gregory McMichael and Travis McMichael began pursuing him.

Minutes before Ahmaud Arbery was shot and killed, a home security camera caught him walking down Satilla Drive. He stopped briefly in front of a house under construction across the street and then went inside. The surveillance video shows someone was watching.

At 1:08 p.m. the man watching called 911 to report a trespasser at a home under construction.

Security video from inside the house under construction shows Arbery walking around briefly. And then, he walks back out. The caller tells a 911 operator that the person in the house was running down the street and this person was caught on camera before, describing him as a “Black guy, white T-shirt,” according to the call.

RELATED: The day Ahmaud Arbery was killed | A timeline of events

The security video shows Arbery leave the house under construction and run down the street. He runs past 230 Satilla Drive toward Burford Drive.

Gregory McMichael sees him and thinks he recognizes him from a previous day.

Gregory McMichael told police that he ran inside his house and told his son, "Travis, the guy is running down the street lets go.”

Gregory McMichael grabs a pistol and Travis grabs his shotgun. In police interviews, the McMichaels said they "didn’t know" if the man was armed or not.

The father and son get in a white truck and follow Arbery. There's no public video showing what happened next, but Gregory later told police they followed Arbery down Satilla Drive toward Burford Drive.

A third associate who is also charged with murder, William "Roddie" Bryan, followed and filmed the incident from his car. The police report said Bryan tried to stop Arbery and block him in. The chase continues around the neighborhood for a few minutes.

The McMichaels are stopped just ahead of Arbery. The 25-year-old was trapped between the two cars and the three men. While Bryan adjusts the camera, shouting can be heard in the background.

Authorities said Travis shot Arbery. The video shows the two of them struggling towards the left side of the vehicle.

Arbery and Travis struggled with the gun out of frame. A second gunshot can be heard and a plume of smoke can be seen in the video.

The two struggled back into frame, a third gunshot can be heard before Arbery collapses.

Although it had been months since the fatal shooting, the case was put into the spotlight in May 2020 because the video surfaced online. The graphic video went viral across social media platforms.

Protests were held in metro Atlanta and across the nation, pushing for justice in the case.

The Southern Poverty Law Center and other groups said last year the shooting appeared to have been racially motivated.

Protesters said they wanted accountability in the case.

1 / 5
Provided
Ahmaud Arbery, 25, was shot and killed by two armed men while jogging in a South Georgia neighborhood back on Feb 23, 2020.

It took months before arrests came.

The Georgia Bureau of Investigation said on April 29, 2020, Glynn County Police Department requested that the GBI investigate allegations of threats against GCPD and individuals involved in the active investigation.

On May 5, 2020 the district attorney formally requested the GBI investigate Arbery's death. The agency's Kingsland Office initiated an investigation.

And on the morning of May 5, 2020. Glynn County Police requested the GBI to investigate the public release of video related to Arbery’s death.

On May 7, 2020 the GBI said Gregory McMichael and Travis McMichael are charged with murder and aggravated assault.

Bryan was arrested a few weeks later on charges of felony murder and criminal attempt to commit false Imprisonment.

The Associated Press reports that the criminal case charging the three men in connection with the death of Arbery is the most significant civil rights prosecution undertaken to date by the Biden administration Justice Department.

"It's a very aggressive move by the U.S. Attorney's Office," Pate said. "I think it's a clear sign that the new Attorney General is going to be very aggressive in civil right's cases."

The federal grand jury in the Southern District of Georgia formally charged the three with hate crimes and attempted kidnapping Wednesday. The indictment also charges the McMichaels with separate counts of using firearms during that crime of violence.

According to the Justice Department, counts one and two of the April 2021 indictment allege that the defendants used force and threats of force to intimidate and interfere with Arbery’s right to use a public street because of his race.

The first count alleges that as Arbery was running on a public street, the McMichaels armed themselves with firearms, got into a truck, and chased Arbery while yelling at him, using their truck to cut off his route, and threatening him with firearms. The alleged offense resulted in Arbery’s death, authorities said.

Count two alleges that Bryan joined the chase and used his truck to cut off Arbery’s route. In addition to the hate-crime charges, count three alleges that all three men attempted to unlawfully confine Arbery  "by chasing after him in their trucks in an attempt to restrain him, restrict his free movement, corral and detain him against his will, and prevent his escape," the news release said.

1 / 7
Glynn County Sherrif's Office
Travis McMichael, 34, (left) and Gregory McMichael, 64 (right) were booked into the Glynn County Jail and charged with the murder of Ahamaud Arbery.

Merritt, Arbery's family attorney, said the three men will first be tried at the state level.

"[The federal charges] feel as a sort of a safe-fail so if for some reason South Georgia doesn't deliver a murder conviction, we at least have the additional safety net of federal prosecution as well," he added.

11Alive legal analyst Page Pate said federal hate crime charges can be difficult to prove but if they are able to, the three could face up to life in prison.

"Obviously there's some evidence that this crime was motivated by racial prejudice but to show that it's a federal hate crime and it's based on a kidnapping charge, that's going to require the government to prove not just that race played a role here, but it was the motivating factor," said Pate.

Pate said they will have to show that racial bias was the single, most motivating factor behind the crime.

Merritt said no date has yet been set for the trial at the state-level due to things getting delayed because of COVID-19.

Georgia's hate crime law is still less than a year old after Gov. Brian Kemp signed it into law in June 2020 following the killing of Arbery.

Before the signing, Georgia was one of only four states in the US without a hate crime law on the books. The bill, HB426, passed in the state Senate by a 47-6 margin. The measure was sent back to the House for a debate of the Senate's changes, including data collection and reporting requirements as well as the addition of sex as a protected factor.

The measure imposes additional penalties for crimes motivated by a victim's race, color, religion, national origin, sex, sexual orientation, gender or disability. Bipartisan support for the measure had been thrown into doubt when Republicans added protections for first responders to the bill, but those protections were removed from the bill and placed into another measure that also passed. And back in March, legislators unanimously passed House Bill 479, an overhaul to Georgia's citizen's arrest statute.

HB 479 would abolish the Georgia law that allows private citizens to arrest someone, while still allowing security guards and store employees to hold people they accuse of a crime until police arrive. Gov. Brian Kemp applauded the passage, saying the statute "strikes a critical balance by allowing Georgians to protect themselves and their families, while also repealing Civil War-era language in our laws that is ripe for abuse."

"Hate crime charges were really important to Wanda. She advocated for hate crime laws in the past in Georgia so that no other family would go without that additional protection," Merritt said. "We want to see these men convicted and held to the fullest extent of the law and that is life in prison."