The BCA is investigating after law enforcement shot and killed a man after an alleged carjacking and police chase. 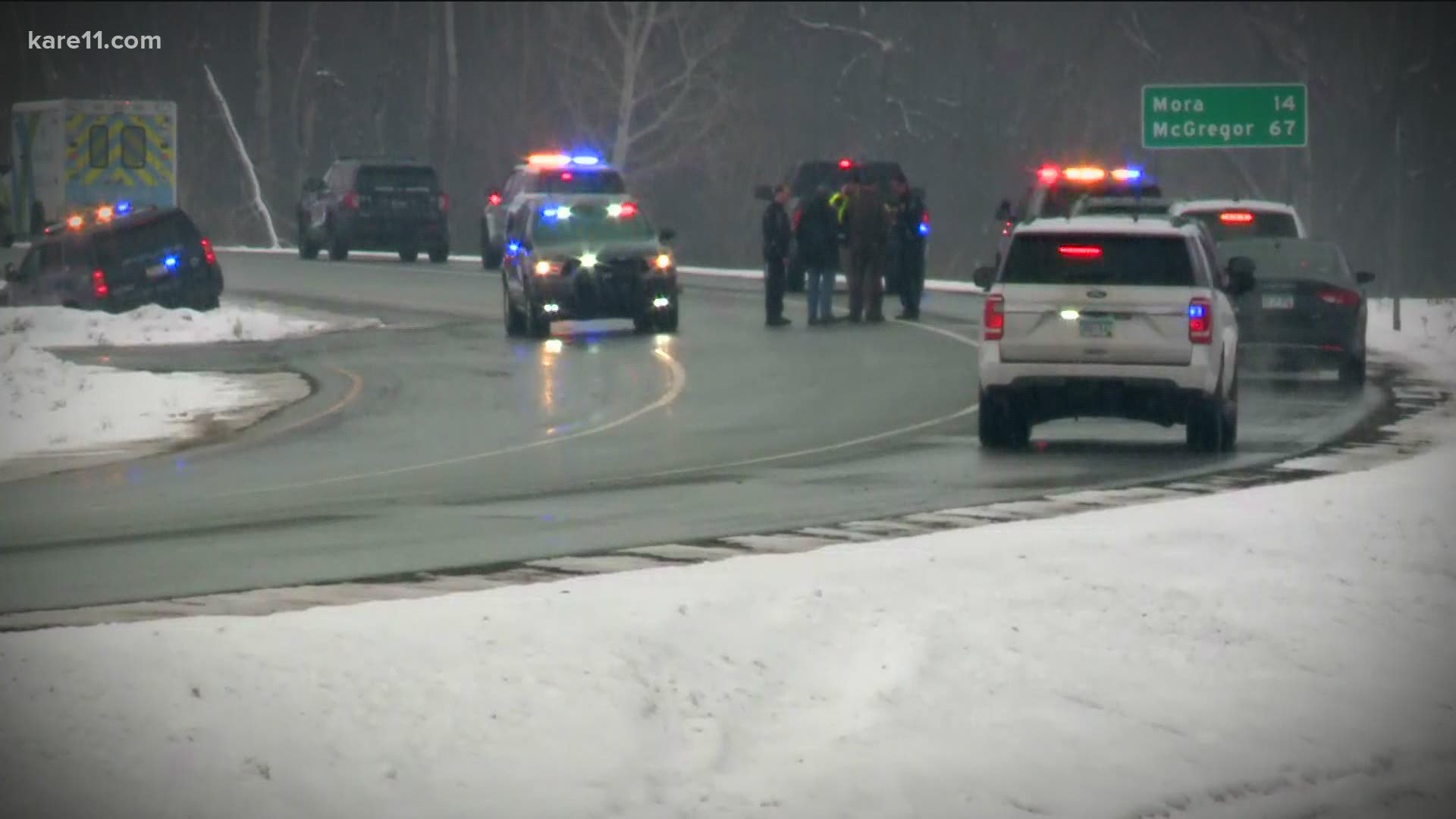 BRAHAM, Minn. — Charges have been filed in connection with a multi-agency pursuit that ended with law enforcement officers shooting and killing a carjacking suspect and arresting another in Isanti County last Sunday.

The Minnesota Bureau of Criminal Apprehension (BCA) said it is investigating the fatal shooting by officers, now identified as:

According to a Tuesday afternoon press release from the Anoka County Attorney's Office, the surviving suspect is Joseph William Heroff. He is charged with first-degree aggravated robbery and fleeing police in a motor vehicle, both felonies.

The county attorney's office did not name the man who was shot and killed, only identifying him as "AAA" in the criminal complaint, but in a release from the BCA the Midwest Medical Examiner's Office identified the man as Dominic Lucas Koch, 27, of St. Croix Falls, Wisc.

According to the complaint the situation began just before 1 p.m. Sunday in Anoka County when Blaine police officers responded to a reported shoplifting in progress at a Kohl's store. Police said when they responded, they were told two men were leaving the parking lot in a white Jeep Compass.

Police said they attempted to stop the vehicle, but it drove into a neighboring Menards parking lot. In that lot, police said they used a PIT maneuver to stop the Jeep. The complaint stated the two men ran out of the Jeep, across a frozen pond, and towards another lot where they allegedly carjacked a pickup truck and led authorities on a 40-mile chase.

That chase ended when the truck became disabled just off Highway 65 in Isanti County. At that point BCA investigators say the men fled on foot.

Heroff was apprehended by officers but Koch continued to flee and at one point was struck by a motorist’s vehicle. The BCA says Anoka police officer Sorteberg then deployed K9 Bravo. Koch fired his gun, striking K9 Bravo. Officers returned fire, fatally striking Koch. Officers rendered medical aid but Mr. Koch was pronounced deceased at the scene. The incident was captured on both body cameras and dash cameras.

Prosecutors say after his arrest Heroff told police that he and Koch were inside the Kohl's store when Koch "decided to shoplift." Heroff said he told Koch not to do it and left to wait in the Jeep. He said Koch returned with a "cart full of merchandise."

The complaint states Heroff also told police that Koch showed a gun during the carjacking.

The Bureau of Criminal Apprehension continues to investigate.

BCA agents and crime scene personnel are responding to an officer involved shooting incident in Isanti County. MN Hwy. 65 is closed in both directions between MN Hwy. 107 and Andree Drive Northeast (near Braham) due to the incident. More information to come.