Harwinton man arrested on charges related to US Capitol riot

Richard Crosby Jr. was seen inside the Senate Chambers and photographed standing at the dais on Jan. 6. 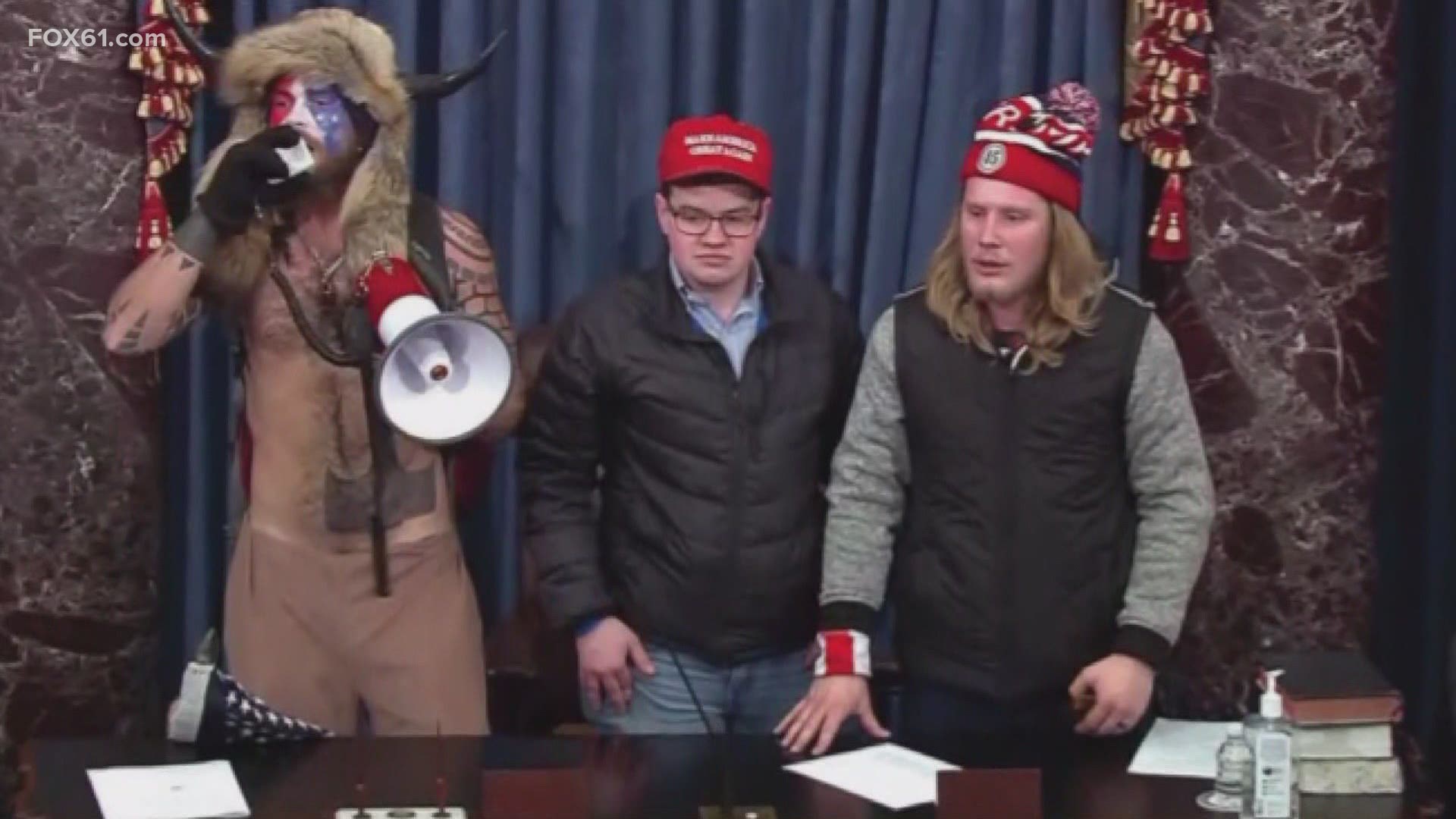 WASHINGTON — A Harwinton man was arrested Thursday on charges related to the Jan. 6 riots at the U.S. Capitol, prosecutors said.

Richard Crosby Jr., 25, was arrested on a federal criminal complaint issued by the U.S. District Court for the District of Columbia.

He appeared before U.S. Magistrate Judge S. Dave Vatti in Bridgeport via video conference from a detention cell on Thursday afternoon. He is expected to be released later in the day.

He is charged with several crimes, including obstruction of Congress and disorderly conduct in a restricted building. He faces up to 20 years in prison and a $250,000 fine.

Neither Crosby nor his public defender responded to the charges during the court hearing.

Court documents said Crosby was seen in footage from the Senate Chamber at the Senate dais shortly after then Vice President Mike Pence and U.S. Senators were evacuated.

Crosby is seen standing next to Jacob Chansley, also known as Jacob Angeli or "The QA Shaman" at the dais. He is wearing a black coat, a red "Make America Great Again" baseball cap, black glasses, blue jeans and a blue shirt.

In one photo released by the Department of Justice, Crosby appears to identify himself as the person in the "middle with red MAGA hat."

Another photo depicts Crosby, without the baseball cap, posing with Chansley and another male, while holding a book taken from the dais desk.

According to court documents, FBI agents interviewed Crosby at his home in Connecticut, where he allegedly stated he wanted to attend the riots because he wanted his "voice heard" and that he believed the "2020 presidential election was stolen."

He said the evening of Jan. 5, he took a train from New Haven to Washington.

On the day of the riots, Crosby allegedly "followed the crowd" after Trump's speech at the Ellipse toward the U.S. Capitol, entered the grounds and then went into the Senate Chambers.

Crosby said he allegedly was in the Senate Chambers for about six to eight minutes, during which Chansley led a prayer before they were ordered to leave. He said he was only inside the U.S. Capitol building for about 20 minutes.

Crosby is the latest individual from Connecticut to be arrested or charged in connection with the attack on the Capitol.

Victoria Bergeson, 40, and Mauricio Mendez, 40, both from Groton, were arrested soon after the riots on charges of curfew violation and unlawful entry.

The riot was like nothing the country had ever seen, as the mob of supporters of then-President Donald Trump descended on the Capitol to stop the congressional certification of Joe Biden's election victim.

Last month, Senate Republicans blocked the creation of a bipartisan panel to investigate the attack on the Capitol, displaying continuing party loyalty to Trump and firm determination to shift the political focus away from the violent insurrection by his GOP supporters.

The Senate vote was 54-35 — six short of the 60 needed — to take up a House-passed bill that would have formed an independent 10-member commission evenly split between the two parties. It came a day after emotional appeals for the commission from police who fought the mob, the family of an officer who died and lawmakers in both parties who fled Capitol chambers in the worst attack on the building in two centuries.