Officers say the little girl was taken by her neighbor, who killed her that same day. He later committed suicide. 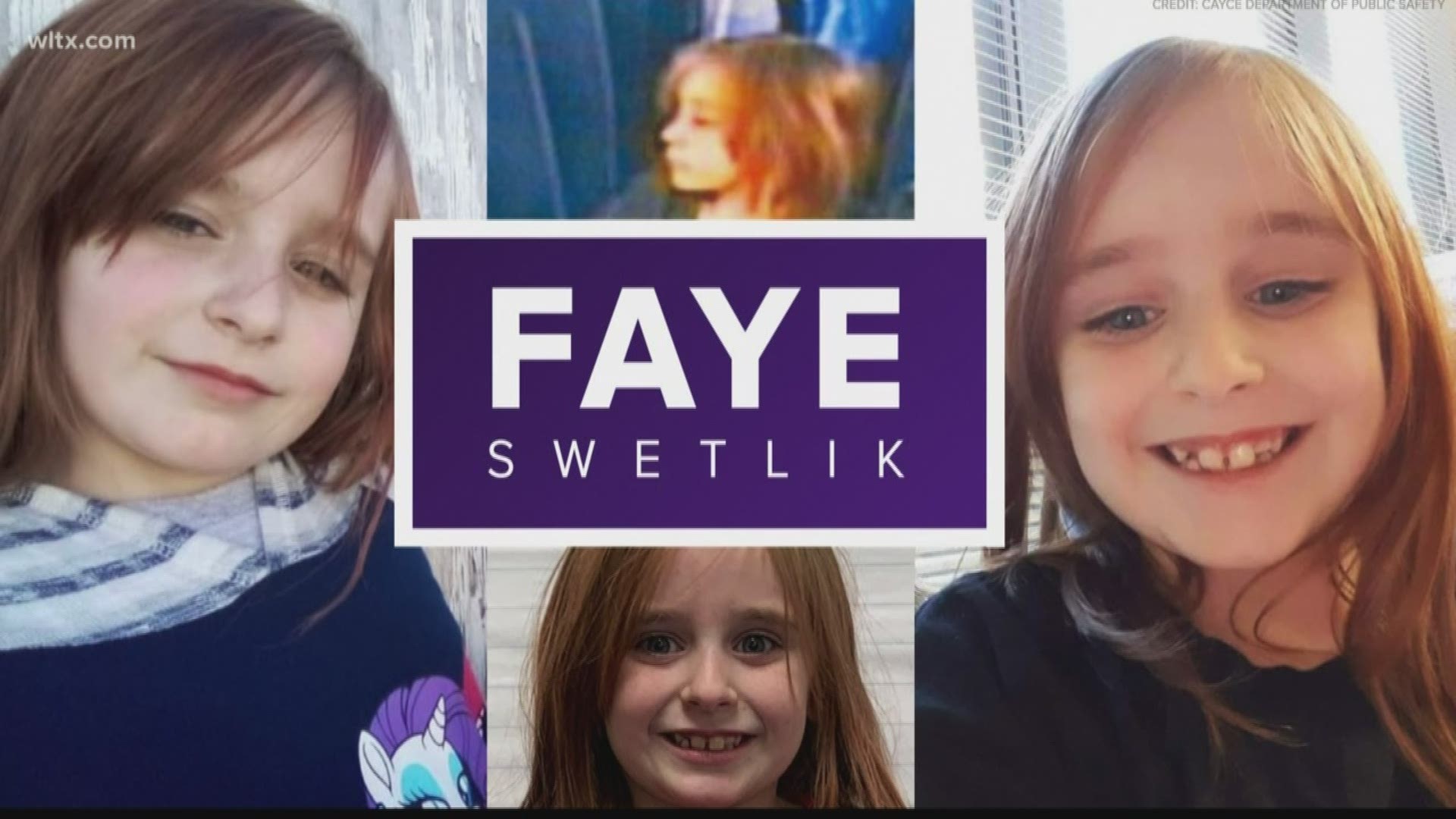 CAYCE, S.C. — Cayce officials say Faye Swetlik's neighbor killed her by suffocating her hours after abducting her, then took his own life nearly three days later.

The Cayce Department of Public Safety, Coroner Margaret Fisher, and other officials held a news conference Tuesday afternoon about the death of Swetlik, the South Carolina girl who vanished in front of her home last week.

"This was not just an investigation or case for us," said Cayce DPS Chief Byron Snellgrove. "Faye Swetlik quickly grabbed our hearts...Faye will never be forgotten."

Snellgrove said based on their investigation, the little girl was taken by 30-year-old Coty Taylor, a man who lived just around the corner from Faye's home.

Lexington County Coroner Margaret Fisher released Swetlik's cause of death but did not give many details beyond that. Fisher released that Swetlik died of asphyxiation, or suffocation, and said she would not release more out of respect to the family. She said Swetlik was not killed in the woods where her body was found, and had only been there a short time before she was discovered.

After the news conference ended, her office sent a news release confirming Taylor had killed himself, citing the cause of death "as a result of an incised wound to his neck."

On Monday, February 10, Swetlik was reported missing by her mother at her home in the Churchill Heights neighborhood in Cayce. The girl had come home from school just before 3 p.m., but an hour later, she couldn't be found.

A massive search began for the child that involved local police, state police, and even the FBI. Around 10:30 a.m. Thursday, officers found Swetlik's polka dot boot as well as as a ladle with dirt in it in a trash can near Taylor's home. That led them to the woods near the area, where Snellgrove found Faye's body.

As that discovery was being made, officers went to Taylor's home, where they found him bleeding on the back patio. He was declared dead.

Officers said DNA evidence connected both crime scenes. They believe Taylor killed the girl and is the sole perpetrator. They think he moved Swetlik's body to the woods in the early morning hours of Thursday.

Snellgrove said he did not know where Faye's body was stored during most of the search.

Police said Taylor had no criminal background and was "not known to law enforcement." They said on Wednesday, February 12, they spoke to Taylor and searched his home, but found no evidence that would lead them to believe he was involved in her disappearance. They added that he was cooperative and gave consent to search his house.

Snellgrove did say video collected in their investigation afterward showed Taylor doing things that were "suspicious" but did not elaborate.

There was a roommate who lived at Taylor's home, but they do not believe he was staying there for most of the ordeal and was not involved in the crime at all.

There will be a candlelight vigil for Faye at 5:30 p.m. on the Cayce City Hall's front lawn. That's located at 1800 12th Street in Cayce.

The vigil will last about 30 minutes and will be held rain or shine. Candles will be provided by the city.

A memorial service for Swetlik will be held Friday at 7 p.m. at Trinity Baptist Church at 2003 Charleston Highway in Cayce.

The family is asking anyone in attendance to wear bright colors in her honor. They say her favorite colors were pink and purple.

At a vigil over the weekend, Faye's parents were in attendance, and thanked the community for their love and support.

Over the weekend, Faye's body was brought back to Lexington County following her autopsy. Law enforcement from Charleston County and Cayce gave her a police escort from the Medical University of South Carolina in Charleston, where the autopsy was performed.

Dozens of people lined up outside the funeral home in Lexington where her body was returned.

Swetlik was a first-grader at Springdale Elementary School. Cayce DPS Chief Byron Snellgrove talked during her disappearance a little bit about the kind of girl Swetlik was.

Foutz and Collins said Faye liked to collect rocks, play outside and take selfies with her family and friends.

"She's fun, bubbly,  loves to color, always has a smile on her face and the prettiest blue eyes you've ever seen," says the family friend. "A smile that would melt your heart."