Carla Krzywicki, 19, and her mother Jean Lavin, 56, both of Canterbury, were arrested Tuesday. 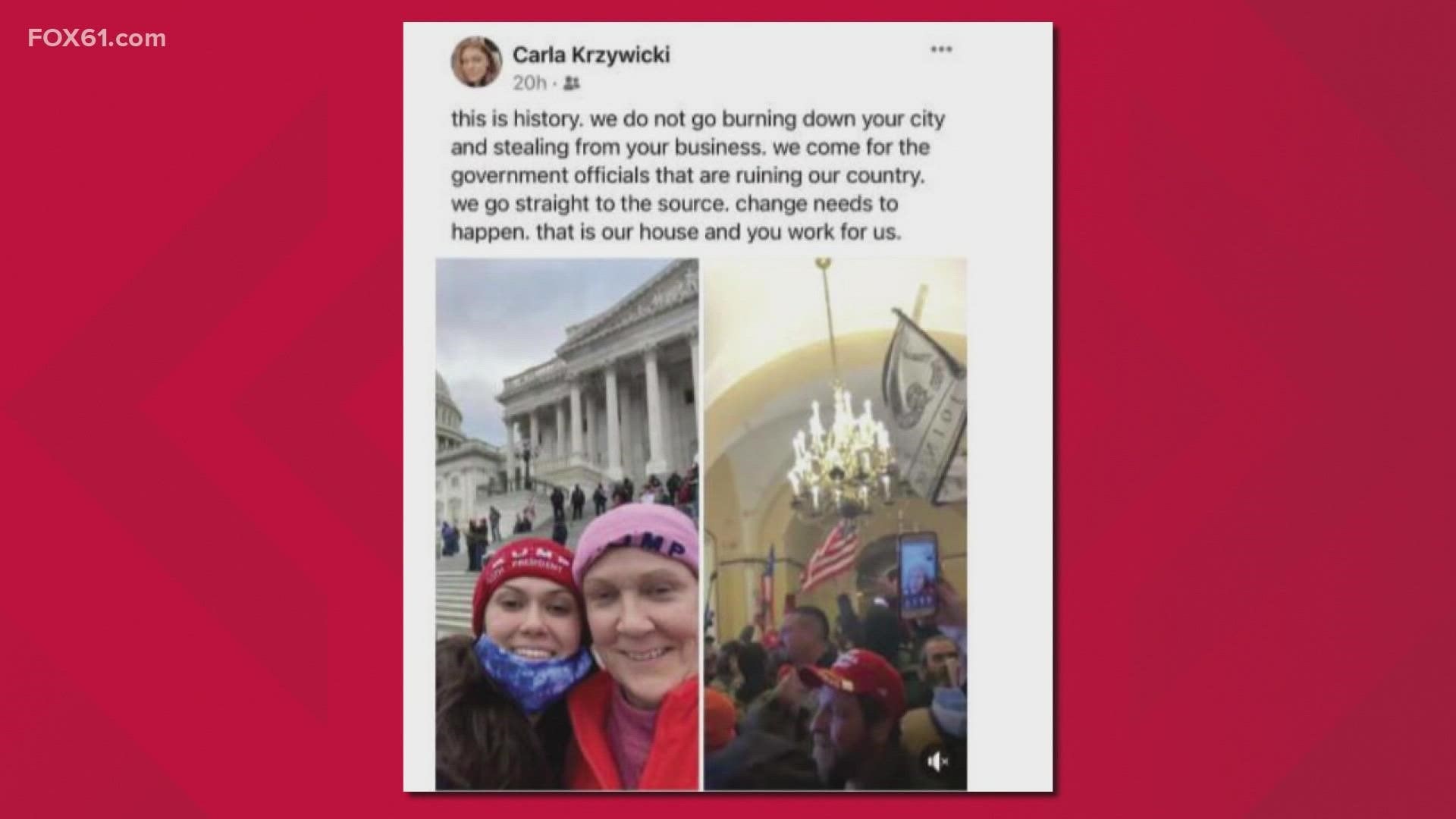 CANTERBURY, Conn. — A local woman and her daughter are facing charges for their alleged involvement in the riots at the U.S. Capitol earlier this year.

Carla Krzywicki, 19, and her mother Jean Lavin, 56, both of Canterbury, were arrested Tuesday.

These mark the 5th and 6th arrests in Connecticut related to the Capitol riots in January. The FBI and congress have been conducting their investigations and hearings in the months since.

“That process will play out and if people broke the law, they should be arrested,” CT GOP Chairman Ben Proto said.

Officials said they received a tip that said Lavin and Krzywicki were among the hundreds of people who stormed inside the U.S. Capitol on Jan. 6, 2021. The tip included photographs from Krzywicki’s Facebook account that showed the mother-daughter duo inside the building.

“This is history. We do not go burning down your city and stealing from your business. We come for the government officials that are ruining our country,” the post said, according to court documents. “We go straight to the source. Change needs to happen. That is our house and you work for us.”

The photos showed the two women at the steps outside of the building and then inside the atrium of the U.S. Capitol.

According to court documents, phone records for Krzywicki and Lavin showed they were in the geographic area that includes the interior of the U.S. Capitol building.

The FBI also received videos that showed the two women climbing a bike rack that rioters had repurposed from barricades to ladders and places against the Capitol terraces, allowing them access to the Capitol building.

Another video showed both women inside the building, according to court documents. A member of the FBI who had personal contact with Lavin and Krzywicki confirmed the individuals in the pictures were the two women.

That day, Lavin was wearing a red jacket, pink shirt, a pink hat that said "Trump" and carried a purple backpack. She also carried a sign that on one side read, "Trump Won." The other side said, "Don't allow 7 states of cheaters to hijack our election!"

Krzywicki was wearing a black jacket, a blue hooded "Trump" sweatshirt, a blue face mask and a red winter hat that said "Trump."

On June 15, the FBI interviewed Lavin at her home in Connecticut. She stated that she and her daughter traveled to Washington, D.C, on Jan. 6 via bus. She said they missed former President Donald Trump's speech that morning, however, they followed the crowd to the U.S. Capitol grounds.

According to court documents, Lavin said they entered the building via an unknown doorway that had already been damaged by others.

The mother-daughter duo started inside the building for less than an hour before they went outside only to return 20 minutes later. Lavin told the FBI that they entered the Capitol "just to look around out of curiosity."

In her interview with the FBI, Krzywicki said she posted a picture on Facebook but later deleted it because it seemed like a bad idea to leave up.

Lavin and Krzywicki, appeared before U.S. Magistrate Judge Robert A. Richardson in Hartford on Tuesday.

“I think there’s far more important issues in the state of Connecticut today, issues like a vaccine passport or vaccine mandate, whether or not the governor’s executive powers are going to be extended through, it might be February or March they’re talking about, as opposed to 9 months ago in Washington, D.C.." Chairman Proto added.

Richard Crosby Jr. was arrested in early June and charged with several crimes, including obstruction of Congress and disorderly conduct in a restricted building.

Victoria Bergeson, 40, and Mauricio Mendez, 40, both from Groton, were arrested soon after the riots on charges of curfew violation and unlawful entry.