NEW HAVEN – The Hamden police officer, who was charged last week with two counts of reckless endangerment and one count of assault, in connection with the... 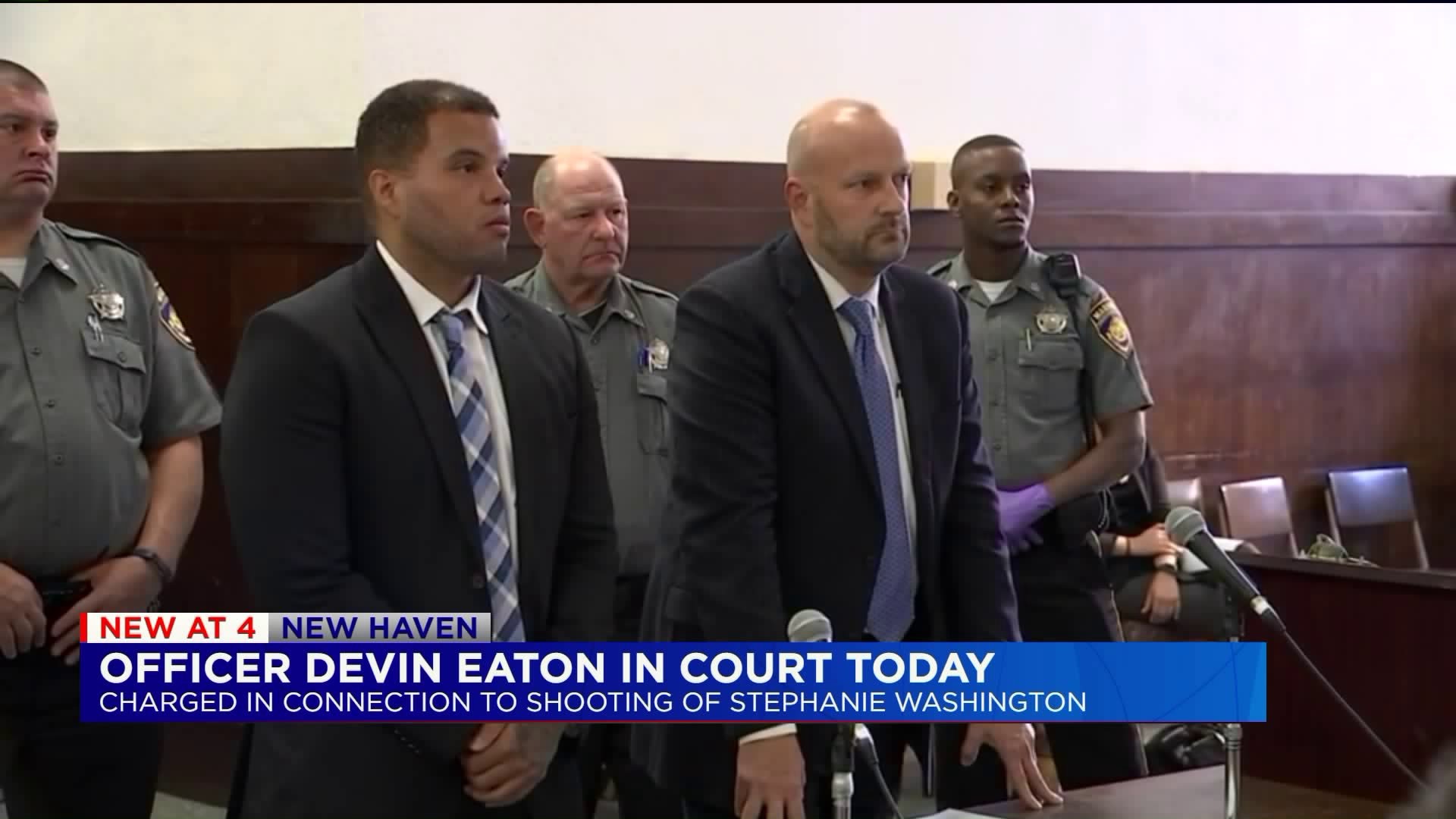 NEW HAVEN - The Hamden police officer, who was charged last week with two counts of reckless endangerment and one count of assault, in connection with the April officer involved shooting in New Haven, was arraigned Monday.

After a hearing that lasted approximately 30 seconds, suspended Hamden police officer Devin Eaton, 29, and his attorney, Gregory Cerritelli, refused to comment because, according to Cerritelli, he has not yet received all of the prosecution's facts about the case.

According to the New Haven State's Attorney's Office, Eaton's sworn, written and signed statement was different from what they heard him say to other officers, when they dissected his body camera footage,  especially as it relates to whether or not he definitively saw a gun in the hands of the cars driver, Paul Witherspoon, who had been reported by a Hamden store clerk to have been involved in an armed robbery attempt moments before his encounter with Yale and Hamden officers at Dixwell Ave. and Argyle St.

Investigators cleared Yale officer Terrence Pollock of any wrongdoing in the incident, in which he fired three shots, but only after his cruiser, which he was sitting in, was hit with gunfire. He told police he thought the shots might’ve been coming from the driver of the car. So, he got out and fired once toward the red Honda.

Investigators say Eaton fired thirteen shots in the direction of the car, eight of which were directed at the passenger’s side of the vehicle, where Stephanie Washington was seated.

She was seriously injured and investigators say Eaton showed an extreme indifference to human life.

Officer Eaton’s contention that his rapid fire gun shots were in response to shots being fired at him is simply not supported by the evidence, according to investigators.

“If this was a black officer, shooting somebody white, I hate to bring this up, but I doubt if this officer would still have a job,” said Rodney Williams, an uncle of Paul Witherspoon, the driver of the red Honda.

He says his nephew, who was erroneously reported to have been involved in an armed robbery of a Hamden convenience store moments before this encounter, is still scarred.

“He’s doing a lot better with the support he has been getting and I am very grateful for that,” said Williams.

While the Hamden Police Department has not yet completed its internal affairs investigation, which is being conducted by an independent consultant, Rodney Williams believes Officer Eaton should already have been fired. As for Yale University officer, Terrence Pollock, not being prosecuted?

Pollock and Eaton both remain on administrative leave. Pollock is being paid pending the outcome of Yale‘s internal investigation. However,  since being arrested last Monday, and hit with felony charges, Eaton is now on unpaid leave.

Eaton is due back in court next Tuesday… Acting Hamden Police Chief, John Cappiello, is expected to make a recommendation regarding Eaton’s job status to the Police Commission sometime in the next three weeks.