A Covid consumed family receives a gift in time for Christmas

"I'm going to see what the world is like now." 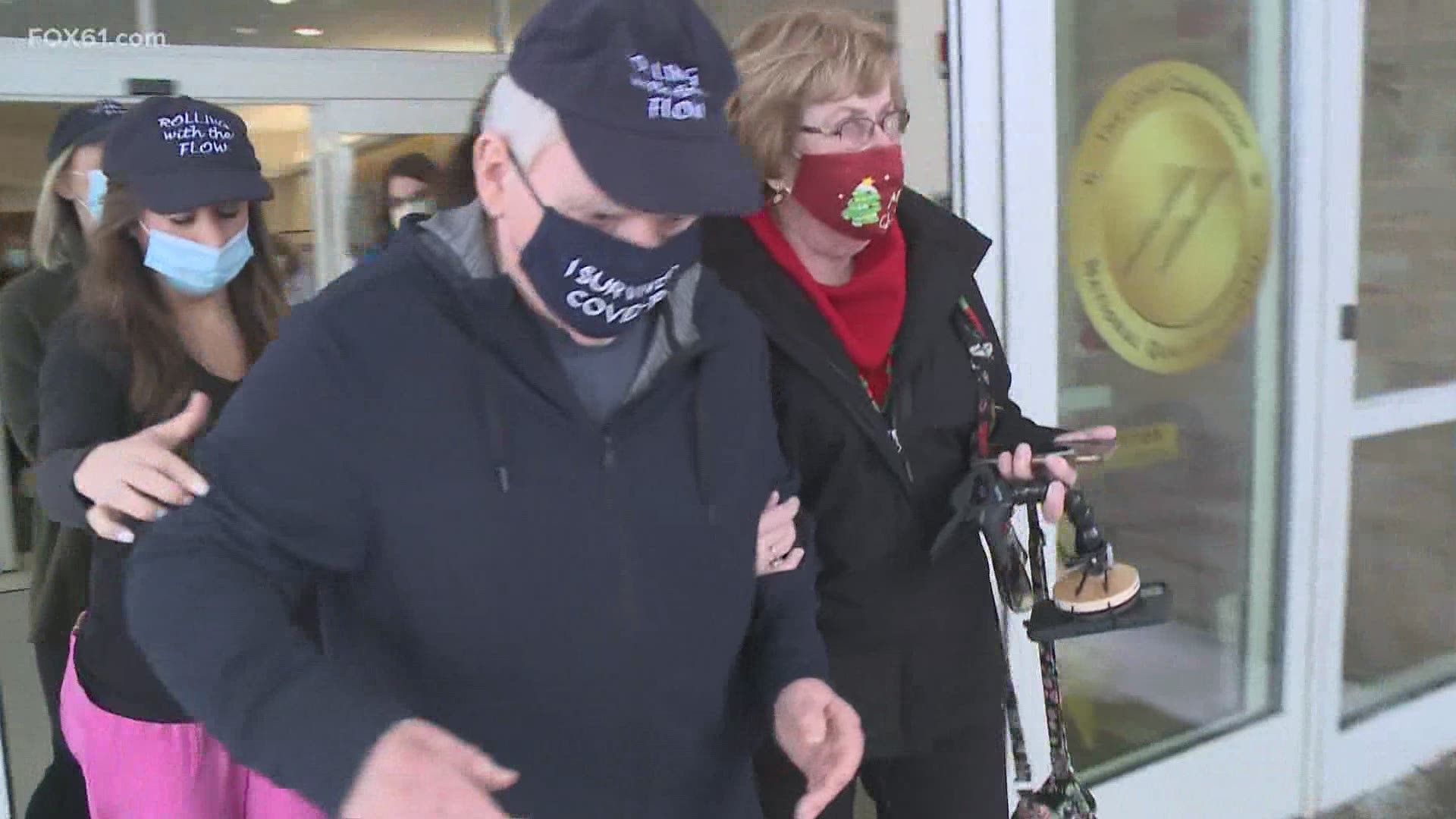 WALLINGFORD, Conn. — Covid-19 has tested the will of many. But it was no match for a 77-year-old Bethel man.

Since the beginning of the pandemic, Gaylord Specialty Healthcare, of Wallingford, has discharged more than 150 of the northeast's sickest, most debilitated COVID patients, who often came to Gaylord directly from acute care ICUs for intensive rehabilitation and vent weaning.

George Aiello is one of these individuals. But no patient Gaylord has treated has required 9 months of hospitalization until Mr. Aiello.

Friday morning, one week before Christmas, the man, who had still been working full-time as an x-ray technician, when he was stricken March 21, was finally released from in-patient care.

"I'm going to see what the world is like now," said Aiello, as he walked through the Gaylord lobby to claps and cheers from staff. "It’s different than when I came in." 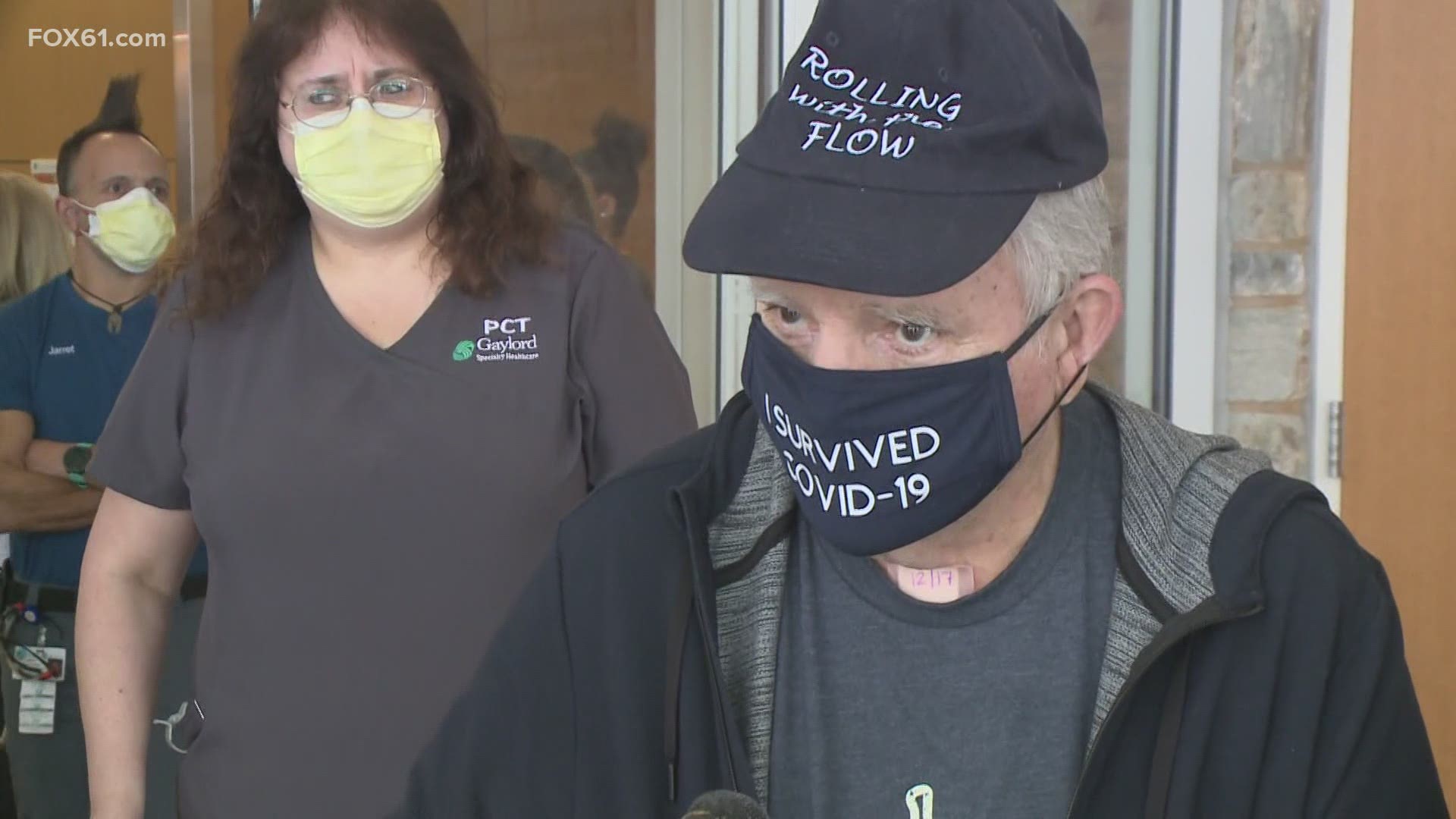 He admitted, in a hushed, raspy voice, the past nine months have been a grind.

For nearly 40 days, he was on a ventilator at Danbury Hospital.

"We never thought we would get to this moment," said Michael Aiello, one of George's two sons.

Danbury Hospital doctors thought George was approaching the end of his life.

According to Michael Aiello, "The neurologist was like there’s no definitive brain damage, but people usually respond to the pain. There’s usually some kind of interaction so we know that there’s function and he has none of that."

But, as George continued to fight, the family wondered how they could regularly see and talk to him, even in his comatose state, without disturbing the medical staff.

"I said 'well what if we took a go pro mount and got a phone and put it on it and then the phone I think has a feature where it auto answers,'" Michael Aiello recalls.

But, how would they keep the phone charged? Micael Aiello, of course, had the answer.

"We took a go pro mount, took a piece of wood that we mounted to it, and then velcroed a wireless charger to it. Then, put the phone on it."

And the medical team placed earbuds in George's ears and adjusted them periodically.

"Every time someone would call, after three rings, the phone will automatically pick up while he was in the ICU," Michael Aiello said.

They used FaceTime to see and speak with George.

He says Danbury Hospital then received a $10,000 grant to make some of the same types of devices for other patients.

In early May, George had become stable enough to be transferred to Gaylord.

"When I came here, I couldn’t move anything for two weeks," said George Aiello. "They work wonders at Gaylord. They are the best!"

"We started just working on getting him up out of bed, sitting up on the edge of the bed, standing in the parallel bars and that took two people," recalls Stephanie Brin, an Occupational Therapist at Gaylord.

While rehabilitating at Gaylord, he also required multiple surgeries on his airway, which impacted his ability to speak.

"He came from almost a whisper to where you had to get close enough to hear what he had to say to his godfather-like voice now," said Jarret Assael, a Gaylord Respiratory Therapist.

"George has been in the hospital for so long he's missed so many family events and holidays and now he's gonna be home for Christmas with his family so, I mean, truly this is why we do what we do," said Kaitlyn Rudolph, a Gaylord Physical Therapist.

"It’s the best Christmas present I have given my family," George said as he made his way slowly outdoors, other than for ambulance transport, for the first time since March.

After 9 months battling #COVID19, 77 year old George Aiello was finally released from @GaylordHealth today. The decision his family made that opened the door to this #CovidComeback. @FOX61News today at 4 & 5. pic.twitter.com/d9O9ckFApI

While much of his family will be able to celebrate Christmas with George, others will not. George's son, George Jr., and his entire family contracted Covid in West Virginia. And George's 12-year-old granddaughter, who while visiting her aunt, uncle, and cousins in West Virginia, was also diagnosed with the coronavirus. So, she will be staying in West Virginia for Christmas to avoid any potential risk to her family and grandfather.