The 53 residents are being relocated at a rate of about 10 people a day. The nursing home was closed on September 16. 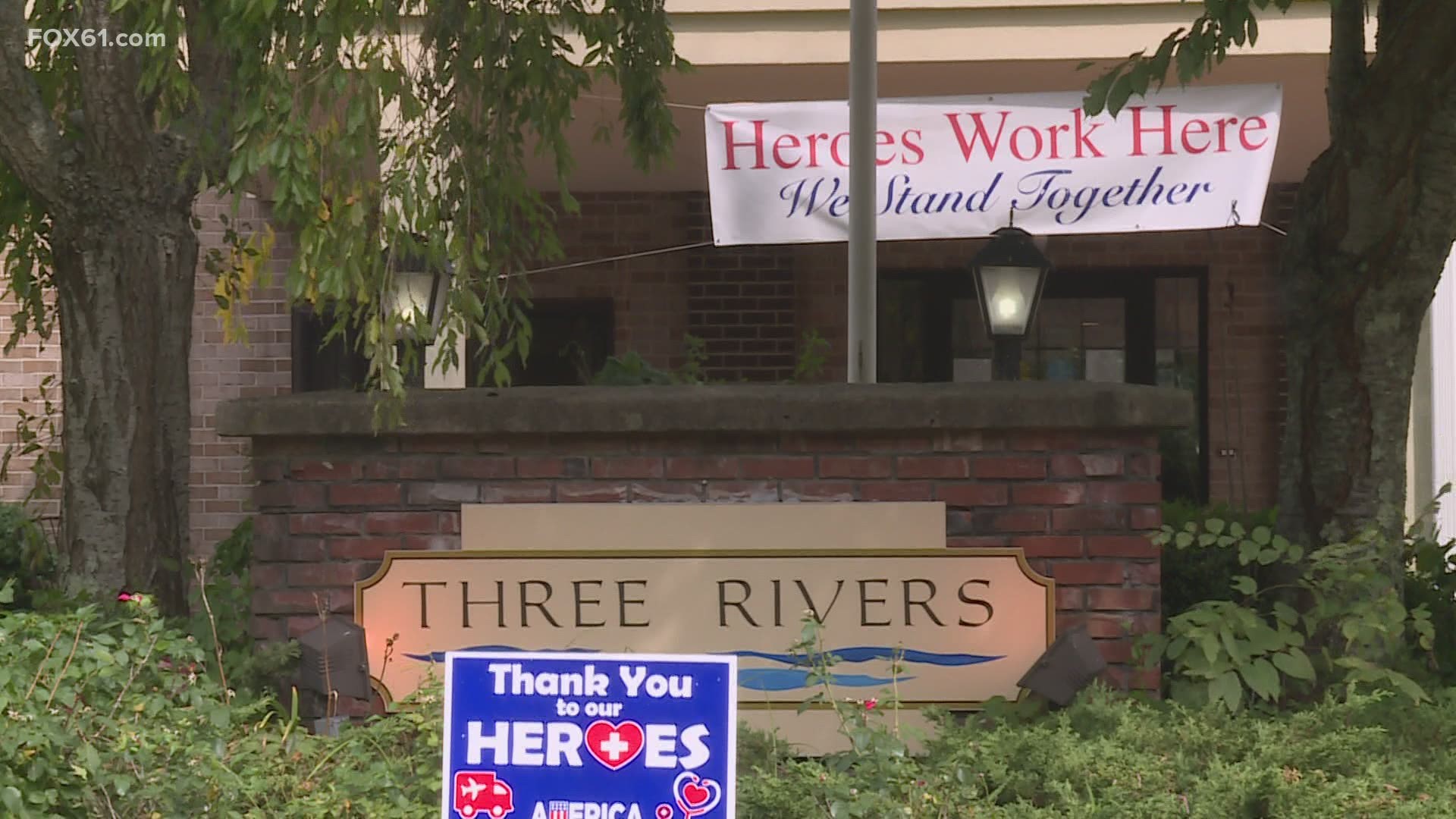 NORWICH, Conn. — On Thursday, residents discharged from the Three Rivers nursing home in Norwich began their relocation and recovery. It follows an unprecedented measure by the state to address the immediate safety and welfare of residents related to an outbreak of COVID.

The 53 residents are being relocated at a rate of about 10 people a day.

The COVID-positive residents at Three Rivers are being taken to a COVID recovery wing at Riverside Health & Rehab in East Hartford. The COVID-negative residents will be able to choose a new home. There is not a shortage of beds. In fact, most nursing homes are experiencing a very low census, so the resident will likely get their first choice. But the relocation process isn't easy.

Matt Barrett, the Executive Director of the Connecticut Association of Healthcare Facilities said, "Nursing home residents already have endured a great amount of stress related to the COVID 19 pandemic without the added stress of transfer and discharge to other facilities. While it can be done successfully, is something we have to watch very carefully."

The unprecedented discharge came after the state-appointed Kate Sacks the temporary administrator. Sacks has 20 years of experience righting the ship at more than 30 distressed homes. It didn’t take her long to determine the problems were too big to fix.

"It took my about 30 hours on-site to realize that the building blocks of compliance were not present on-site," said Sacks.

Barbara Cass off the Department of Public Health added that in her 20 years, the department has only appointed a temporary administrator to take over a facility one other since. During that time in 2006, they did not order residents to be discharged.

Aside from the investigation conducted by the Department of Public Health, Connecticut's Longterm Care Ombudsman thinks the violations may be criminal. Mairead Painter said, "I did make a referral to the states attorney's office to have them look at both the company, the facility as well the staff member who proceeded in a reckless manner. When working while not feeling well and while not appropriately using all infection control measures."

The facility is owned by JACC Healthcare. They also operate another facility in Willimantic. In a statement they told FOX61, “Our priority is now is acting safely and swiftly to relocate our residents to other homes, working closely with their families and loved ones.” The Department of Public Health told FOX61 they can't comment on if there are ongoing investigations related to other JACC owned facilities, but that they want to ensure the welfare of all residents.

SEIU, the union that represents nursing home workers called the decision to discharge the residents, ‘disappointing’ and said, “...dozens of frontline workers who were brave enough to keep showing up daily...may face job loss.”

In a statement, they go on to criticize DPH.

"Three Rivers is another example of DPH’s failure to hold nursing homes accountable. If the State had done a better job enforcing and ensuring compliance with infection controls and other safety protocols, including but not limited to bringing in an outside manager to take over operations based on the apparent collapse of the previous management, DPH may have avoided the drastic measures that the State has announced today. DPH must do better, much better, to ensure that infection control protocols are enforced at every nursing home in Connecticut."

The nursing home infection eventually spread to Backus Hospital where a patient was transported but didn't test positive until they were about to be discharged. Nine hospital workers were infected.

DPH did not revoke JACC’s operating license. Technically, the building hasn’t been shut down, but it’s unclear how it would continue to operate without any residents. One possibility would be using the facility as COVID recovery center under new management. That area of the state is devoid of COVID recovery centers, which were stood up at the height of the pandemic to handle hospital discharges as a level of intermediate care between the hospital and home.

The state uncovered systemic infection control violations that persisted despite a plan of correction being put in place. The problems included but are not limited to the improper use of PPE, corhorting, lack of staff, lack of oversight and lack of training. The DPH report says a nurse who traveled out of state came back to work while feeling ill. She allegedly interacted with residents while not wearing PPE properly. She ultimately tested positive for COVID.