Fines increase to $10,000 for CT businesses that violate COVID-19 rules 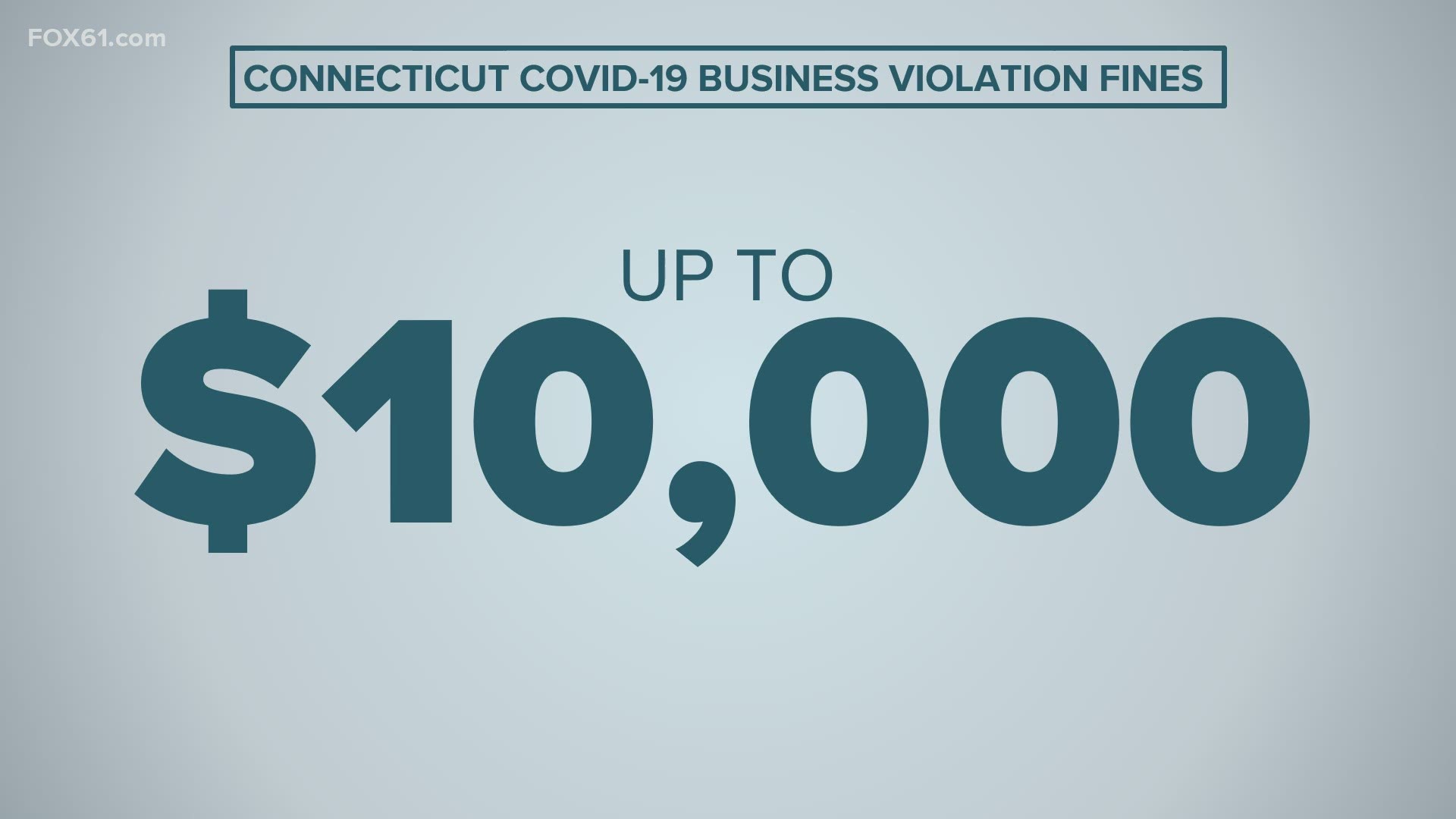 Lamont says the action was taken in response after receiving feedback from municipal leaders, public health officials, and people from within the business community.

“The sector rules and capacity limits we’ve implemented are intended to mitigate the spread of this disease to the greatest extent possible,” Governor Lamont said. “While the overwhelming majority of businesses in Connecticut have shown an incredible amount of leadership and have been fantastic partners in this front, we have seen a small number of businesses in flagrant violation of these public health rules, and that’s all you need to cause a super-spreading event that leads to a large number of cases and hospitalizations.

"We’re doing that not only to keep your patrons safe, but to help keep your doors open during the holidays," Lamont said. "It's going to be expensive if they can follow the protocols. This is the way we can avoid a shut down."

“Increasing compliance with the protocols we’ve already enacted is an important responsibility in keeping our communities safe. We want to do everything we can to mitigate the further spread of this virus while avoiding the implementation of more restrictions or lockdowns on our already hard-hit economy and small businesses.”

"We take your public health seriously as a state if there are bad actors," DECD Commissioner David Lehman said. "Done properly, we think eating in restaurants are safe. We want to make sure bad actors don't continue to cause unnecessary spread for all the citizens of the state"

The original fine for restaurants was $500. The fines can be issued by local health directors or municipal designees with help from the police.

“Particularly as we approach Black Friday and the start of the holiday shopping season, we want to stress the importance of following public health protocols to protect both customers and workers,” Governor Lamont said. “Working together, we can get the spread of COVID-19 under control while mitigating the impact that it is having on our economy.”

When asked how many businesses he thought would actually not comply, Gov. Lamont said:

"I think it's very few [who will be affected], we're making people aware and alert."

"The Governor himself has said that the vast majority of restaurants are doing what they're supposed to in order to keep customers and employees safe. Our industry will continue to stand with him and call out anyone who isn't following the rules. But if Connecticut is going to use fines as a stick, it should also use state grants as a carrot for restaurants that are following the rules while struggling to keep their doors open.

States all around us are implementing bigger grant programs than Connecticut for their small businesses right now, because they know those businesses are vital to their state economies. Governor Lamont knows this too, and even recently said that the state’s Rainy Day Fund could be a source of aid to help restaurants in need. So our simple question for Governor Lamont is this: 'If we’re going to punish the few bad actors, how are we also going to help the many, many good actors?'"

“While I understand the Governor’s goal to deter bad actors who ignore the rules and contribute to the community spread of the virus, it's wrong to provoke fear and implement enormous fines without defining a clear appeal process and making a concerted effort to increase communication and assistance to those trying to create jobs and figure out how to navigate the pandemic. Instead of focusing on penalizing job creators and job growth, the governor must make a stronger commitment to focus on positive actions our state can take to help small business and jobs, while also reducing community spread so that our families can gather safely and more people can return to work.”

Read the order below: