Lamont revealed where the state stands on the seven criteria listed in phase one of the state's reopening plan. 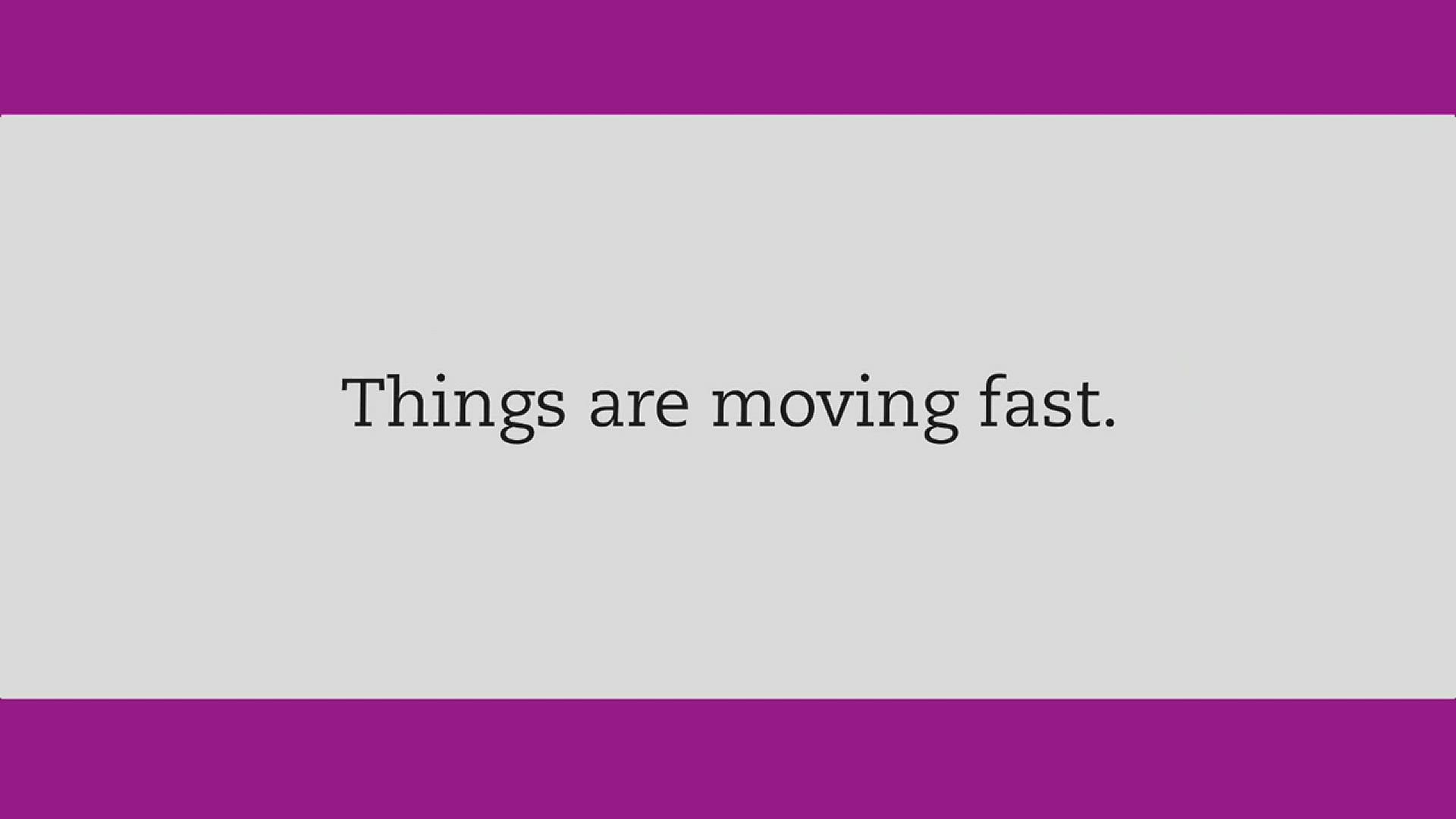 Governor Ned Lamont revealed where the state stands on the seven criteria listed in phase one of the state's reopening plan. The target date remains May 20th, 2020.

"We're back on track in this sense. Our hospitalization is down again. That's good. We were worried a little bit, and that's a trend that I hope we're able to count on," Governor Lamont said.

Governor Lamont said COVID-19 statewide hospitalizations are down about 30% from the peak. He showed a graph, which included a status marker in the "green."

"So far, based upon this criteria, we get an A+," Governor Lamont said. 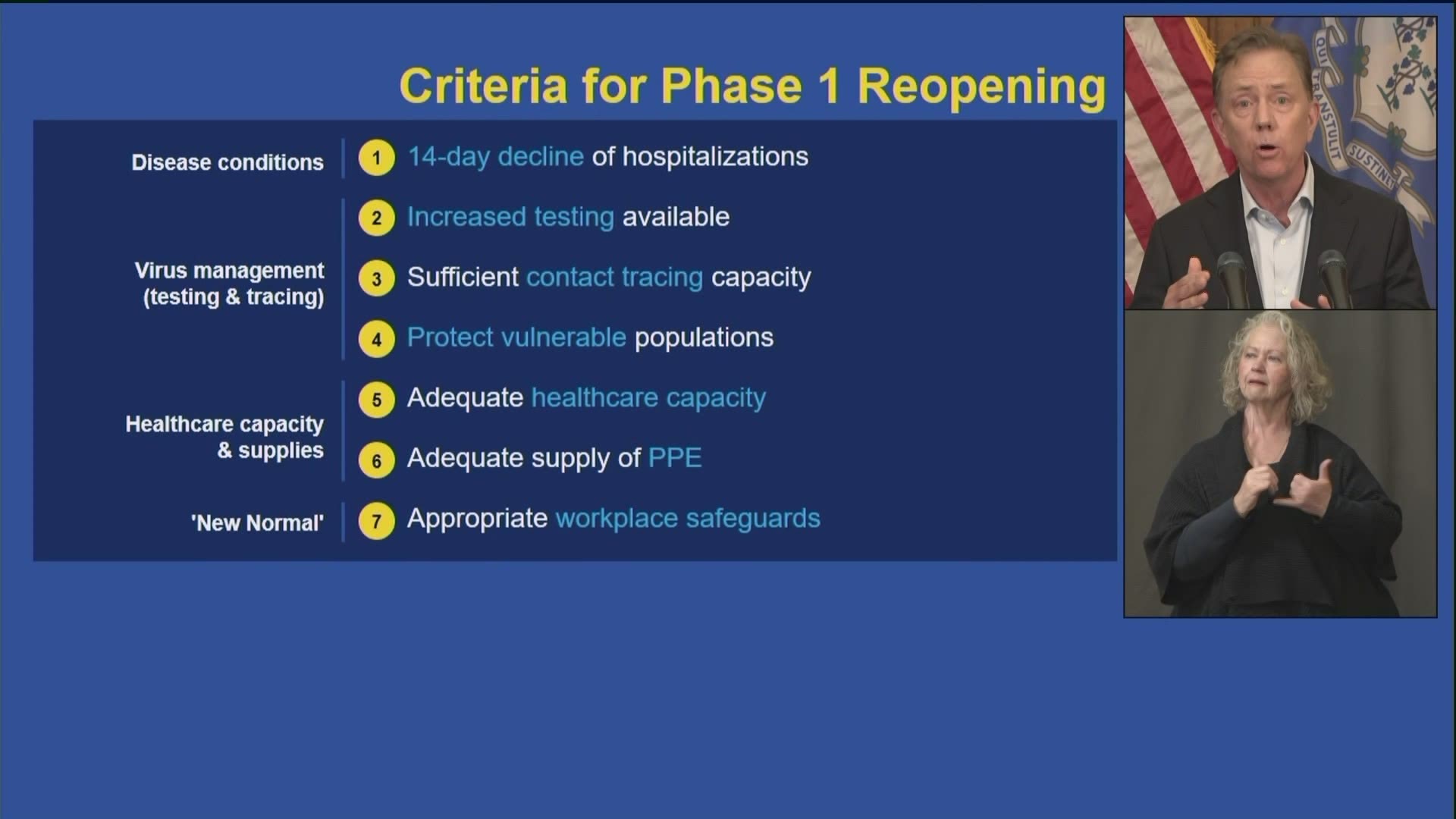 Governor Lamont said testing is being ramped up and there is a goal to increase capacity to a rate of 42,000 COVID-19 diagnostic tests per week by May 20th.

"That means, on average, we want to double the amount of testing we're doing right now," Governor Lamont said.

"We get a better sense of what infections look like, a community spread in the greater community," said Governor Lamont.

He added, "super progress" is being made on faster turnaround times for test results, and the state is continuing to work with labs to make sure they can up the capacity to do the testing analysis.

"There, I'm really pleased to say we're getting success from our local partners," said Governor Lamont.

"Be it the swabs, be it the reagents, all the different pieces - we think we're nailing that down on a contractual basis," Governor Lamont said.

He added he thinks there will be progress on testing capacity and implementation over the next few weeks.

RELATED: Here's how colleges and universities plan to reopen in Connecticut

According to Governor Lamont, the platform ContaCT, created with Microsoft for contact tracing, is set to go live and will be tested over the next day or so. 20 local health departments will begin the pilot program next week.

"Once you test positive and we get notice from our local department of public health…that person will get a text, that person will say 'We understand you've tested positive for COVID. If you're willing, could we have one of our contact tracers give you a call and find out who you've been in contact with? Otherwise, would you mind filling out this form telling us who of your friends, or who you've been in contact with? We can notify so they can in turn be tested or quarantined going forward," Governor Lamont said.

He added hundreds of people have volunteered to be "contact tracers," with plans to have 700 of them "very soon."

Governor Lamont said the goal for this criteria is to begin screening vulnerable or high-risk groups. Those include:

"We know the complications and fatalities in these vulnerable populations," said Governor Lamont. "We also know it's those most congested areas where you can have flare-ups and the potential for a resurgence of COVID. This is why it's really important that we continue to focus on our nursing homes. You know what we're doing in terms of all the physical inspections. You know that we are now going out and testing everyone at nursing homes, focusing on first responders, focusing on symptomatic individuals, and then getting to everybody. Direct care workers, corrections staff and first responders are going to be important in the same way. These are folks that put themselves at risk every day. We owe them the very best we can to make sure they're safe and the people they're treating are safe."

Governor Lamont also focused on at-risk urban communities and said it's important to keep them protected, too.

According to Governor Lamont, the state has a lot of testing capacity in those areas, but they need to do "a better job getting the tests to these folks and making sure they realize how important it is they get tested."

He also announced a more than $7 million federal grant to help roll out testing in federally qualified health centers, which tend to be in more disadvantaged communities.

He also announced he would be signing an executive order to help more people get testing.

"By the way, for this community, you don't need a doctor's permission anymore," Governor Lamont said. "We want you to get tested. I think it's in the best interest of your health, your family's health, and the community's health."

"This is why for all of us we look at the declining hospitalizations as really important. Dr. [Albert] Ko reminds me all the time, we have a very thin margin for error here," Governor Lamont said.

Governor Lamont said the slightest flare-up in a nursing home or distressed communities can lead hospitals to become overwhelmed, which happened in places like Italy and New York.

"We're not going to let that ever happen in Connecticut," Governor Lamont said. He said hospital capacity would continue to be closely monitored.

"Right now we have about 40% of our capacity, which is good. If we get closer to 20%, we rethink some of our openings and some of our priorities," he said.

He also urged people who are feeling ill not to wait to get critical care, calling it "dangerous."

"We want you to go to the hospital. Talk to your doctor if you feel at some risk there because people are waiting and they're waiting too long and we do have the capacity for you right now," said Governor Lamont.

Officials goal for this criteria is to have a 30-day supply of items like PPE, including makes, gloves, gowns and face coverings in major healthcare systems.

Governor Lamont said the state's stockpile is strong, excluding gowns, and the supply chain is "stabilizing."

Governor Lamont said protocols and guidelines are expected to be rolled out by Friday for store owners, salons and restaurants so they'll have time to prepare before opening on May 20th. He added, if that isn't enough time - then don't open up.

He also said the Reopen Connecticut Advisory group is working closely with industry experts to create the guidelines.

"We put together these protocols, if you will, in a way that I think is clear to understand," Governor Lamont said.

"It's going to be a well-developed guidance," Paul Mount, the Governor's Chief of Staff told FOX61's Zinnia Maldonado.

Governor Lamont said the state is also working with local municipalities on zoning changes and is working on an executive order.

"My understanding is we're going to have an executive order on that in terms of what we can do to make it easier for restaurants to serve outside a meal and a drink if they want, and we're working with the local municipalities who have a lot more authority over the local municipal zoning and they will have the green light there," Governor Lamont said. "My preference is to open it up allow more of those tables to go outside, maybe even into some of the parking areas or the sidewalks to make this something that brings your city to life and do it safely.”

RELATED: How to file for unemployment in Connecticut if you are self-employed