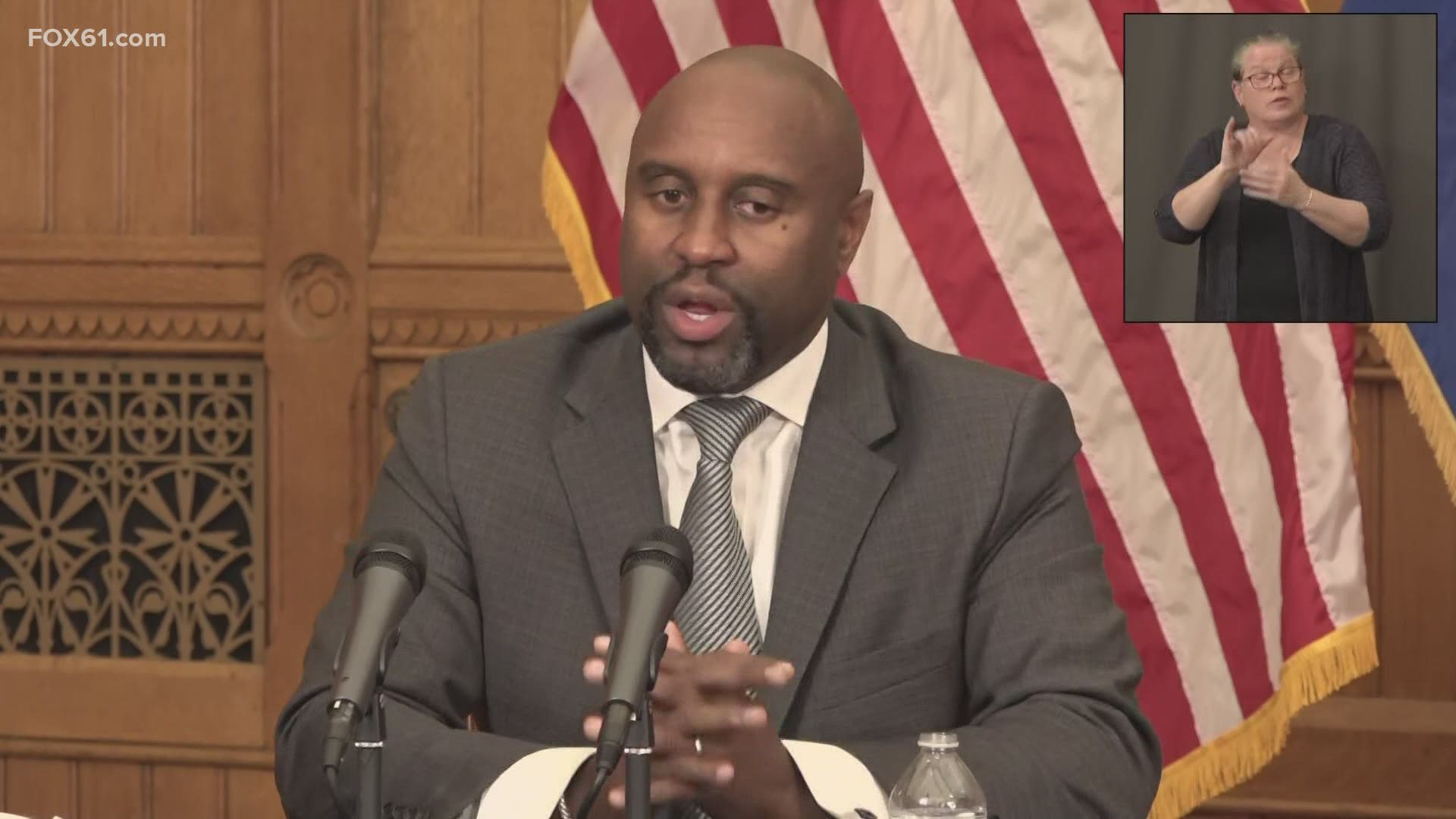 HARTFORD, Conn. — Governor Ned Lamont said he has appointed two co-chairs of a Vaccine Advisory Group that will report to the federal government the state's plans for what it will do when a COVID-19 is available.

The Governor's office released its latest COVID-19 statistics Monday, showing a decrease in hospitalizations and a positivity rate slightly above 1 percent.

Connecticut administered 45,595  tests over the weekend and 497 tests came back positive, yielding a positivity rate of 1.1 percent.

Current hospitalizations dropped by nine people and there are now 68 patients being treated in the hospital for the virus. There were three more COVID-19 related deaths over the weekend. Connecticut's total COVID-19 associated death toll is 4,495 people.

➡️45,595 tests administered and 497 came back positive (1.1% positivity rate)
➡️68 patients are hospitalized (decrease of 9)
➡️There were 3 COVID-related deaths over the weekend

Lamont said on a conference call with Vice President Mike Pence's COVID-19 task force, the state was asked to put together the advisory board that will report on the logistics of possible vaccine distribution and the state's infrastructure regarding a vaccination program.

Lamont said Dr. Reginald Eadie, CEO of Trinity Health and  Dr. Deidre Gifford will co-chair the panel. Eadie said the task was not about when we get the vaccine, but how to get it right. Gifford said getting the vaccine right is one of the most important public health issues of her lifetime.

Lamont promised the work of the group would be transparent

Lamont said the federal government officials on the call said the any vaccine distribution will not happen any time soon. But that the government wanted to make sure plans were in place.

Lamont also said federal officials recommended states have a 60 supply of PPE and the federal government have a 90 day supply as a backstop. He said Connecticut has a 90 day supply. 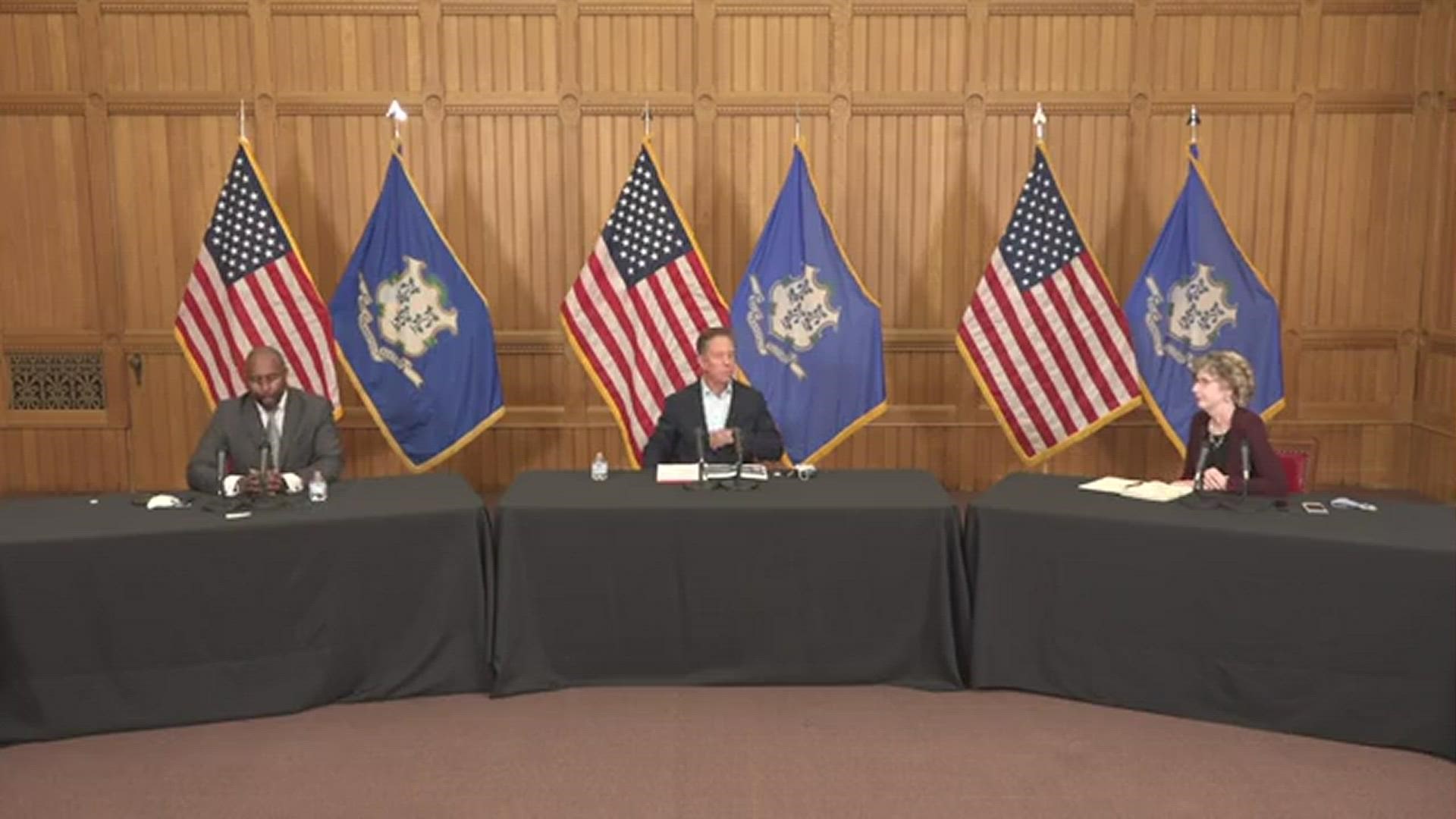 The update comes as numerous schools across the state have enacted their mitigation strategies as cases continue to pop up. Some schools have closed for a day or two, moving all students to online learning, while other schools like Lincoln Middle School in Meriden only needed to place one class in quarantine after a positive case due to corhorting

Cases last week had sent the state into a higher infection rate, over 1 percent. Gov. Lamont had expressed slight concern during a press conference Thursday when the positivity rate came back at 1.6 percent.

However, last Friday, the Governor's office released its latest COVID-19 statistics showing the state had administered 13,865 tests and 141 of them came back positive. The positivity rate dropped back down to approximately 1 percent.

As of last Friday, 77 people are in the hospital for COVID-19.

The new fines include:

As of right now, the capacity for events are:

Also last week, Gov. Lamont discussed the financial health of the state which, like all states, took a huge hit in due to the pandemic.

In the short term, Gov. Lamont said Connecticut is in a good position with a 15% surplus, which is seventh in the nation. The state is ranked 19th out of the 50 states in economic bounce back. However, deficits are expected for The 2022 and 2023 fiscal years.

Gov. Lamont did express his concern with the upcoming fiscal year and the uncertain economic impact of the continuance of the COVID-19 pandemic. Today, he announced the launch of the Connecticut Department of Revenue Services (DRS) multi-year IT modernization initiative that he said would improve the customer’s experience and deliver additional, user-friendly features such as mobile device-friendly design, secure web messaging, and advanced tax filing reminders.

The launch is highlighted by the new, online tax filing and payment portal called DRS myconneCT. Certain taxes filed by businesses are included in the initial phase, and the program will include all state tax filings made with DRS in future phases.

Information about the portal will be included in business.ct.gov, the one-stop-shop for businesses launched in July, and is part of the broader efforts of the Lamont administration to streamline and modernize government services.