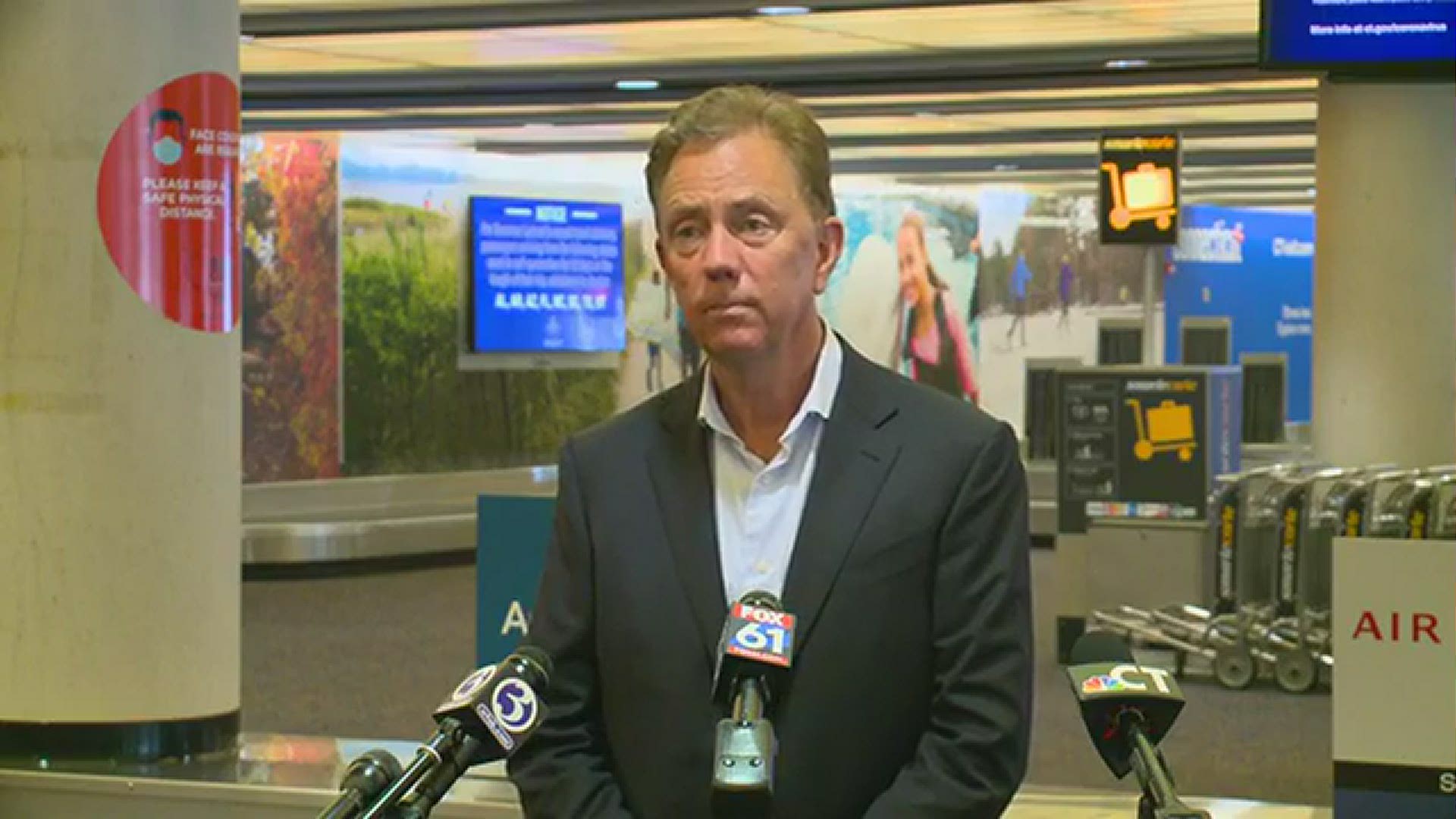 HARTFORD, Conn. — *Editor's note: Washington Governor tweeted Wednesday night that travelers from Washington will not have to quarantine for 14 days. Washington was placed on the list in error and does not meet the risk criteria.

People traveling from states with higher COVID-19 infection rates must quarantine for 14 days.

Gov. Lamont said that the advisory for travelers is "strong" but will be enforced on a voluntary basis. Connecticut residents traveling back from a high infection area will also be asked to self-quarantine for 14 days.

Visitors from states over a set infection rate of 10% will have to quarantine, Cuomo said. As of Wednesday, states over the threshold were Alabama, Arkansas, Arizona, Florida, North Carolina, South Carolina, Utah and Texas.

The order takes effect as of 12:01 tomorrow morning. Travelers we talked to say the quarantine rule is a good idea, but the order itself doesn't necessarily have any teeth to it.

“There weren't any cases for several months [in Utah] and now this month it's just jumped like crazy, and I have to go through Vegas, which is bad I think,” says Belchertown, Massachusetts resident, Anna Weyher.

Travelers heading from Bradley to Alabama, Arkansas, Arizona, Florida, North Carolina, South Carolina, Washington, Utah, and Texas will come back to Connecticut with an extra ticket to 14 days in quarantine. 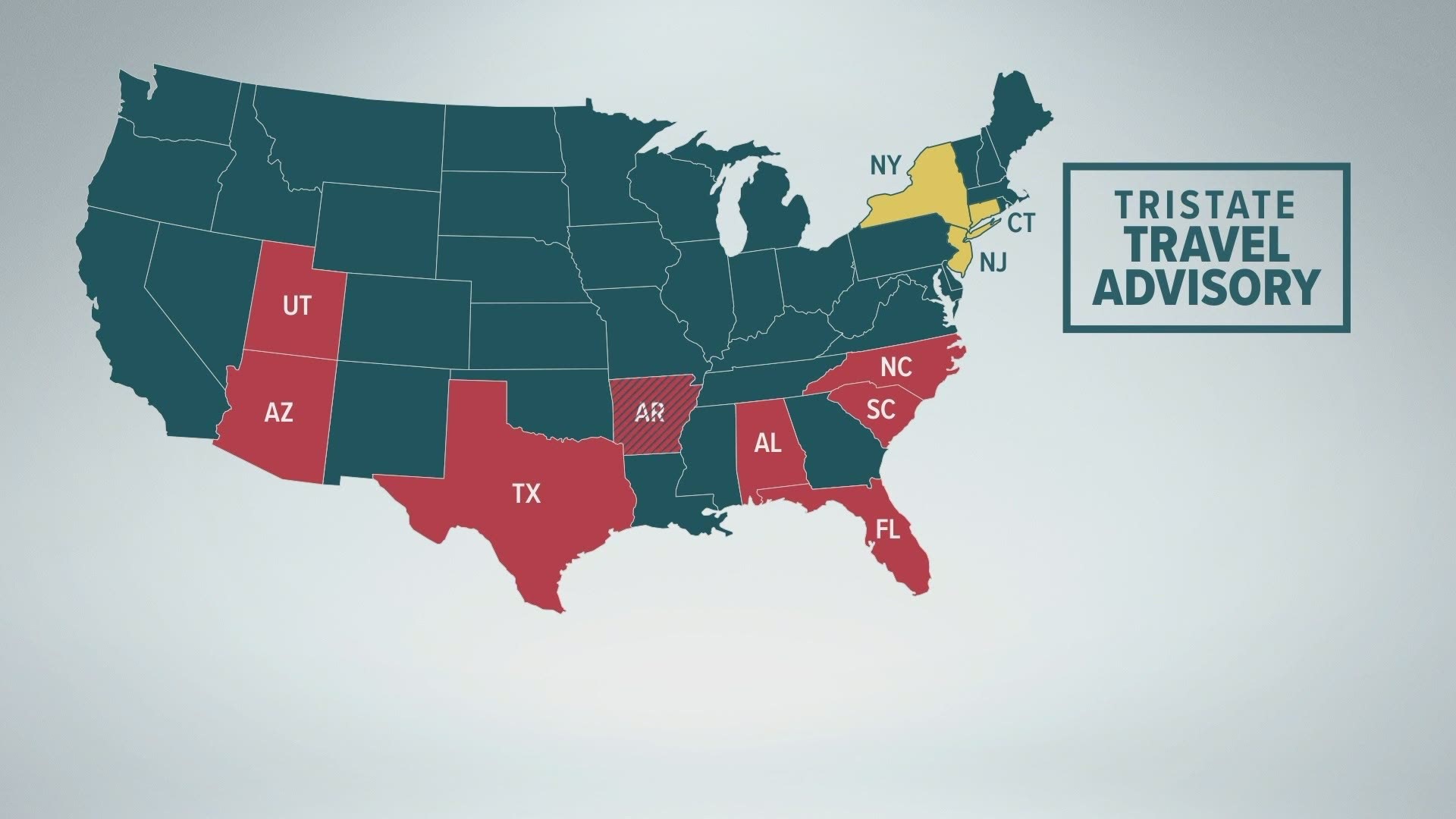 “They're unprecedented times,” says Tiffany Shumaker, who was traveling to her mother’s house in Florida. “We don't know what to expect. It's just trying to keep everyone safe.”

Governor Lamont joined a news conference with New York and New Jersey Governors Andrew Cuomo and Chris Murphy. They say they don't want the progress we've had the last few months to go to waste. Governor Lamont taking to Facebook to ask people to keep the trend in our state moving in the right direction.

“Bradley, I believe has a number of flights everyday to and from Florida,” says Lamont. “First thing we're going to do, at least at Bradley, where I have a little more authority, is make sure people notice when they get off the plane what the requirements are.”

The Connecticut Airport Authority says they are already working with the Governor's office to post signage outlining requirements for passengers. They say they are also notifying their partners.

While Lamont says you must self-quarantine, he isn't saying that he will necessarily put fines or other charges in place for people who do not follow the new protocols.

“We're thinking about [putting fines in place],” says Lamont. “As you know, to date, people have been pretty good about following our guidance. But, we're going to be working with the airlines, working with hotels, working with social media, so that people know exactly what the rules are...In terms of enforcement, we can work with local public health and ask our neighbors, for example, the hotel industry to make sure they know what the rules are.” 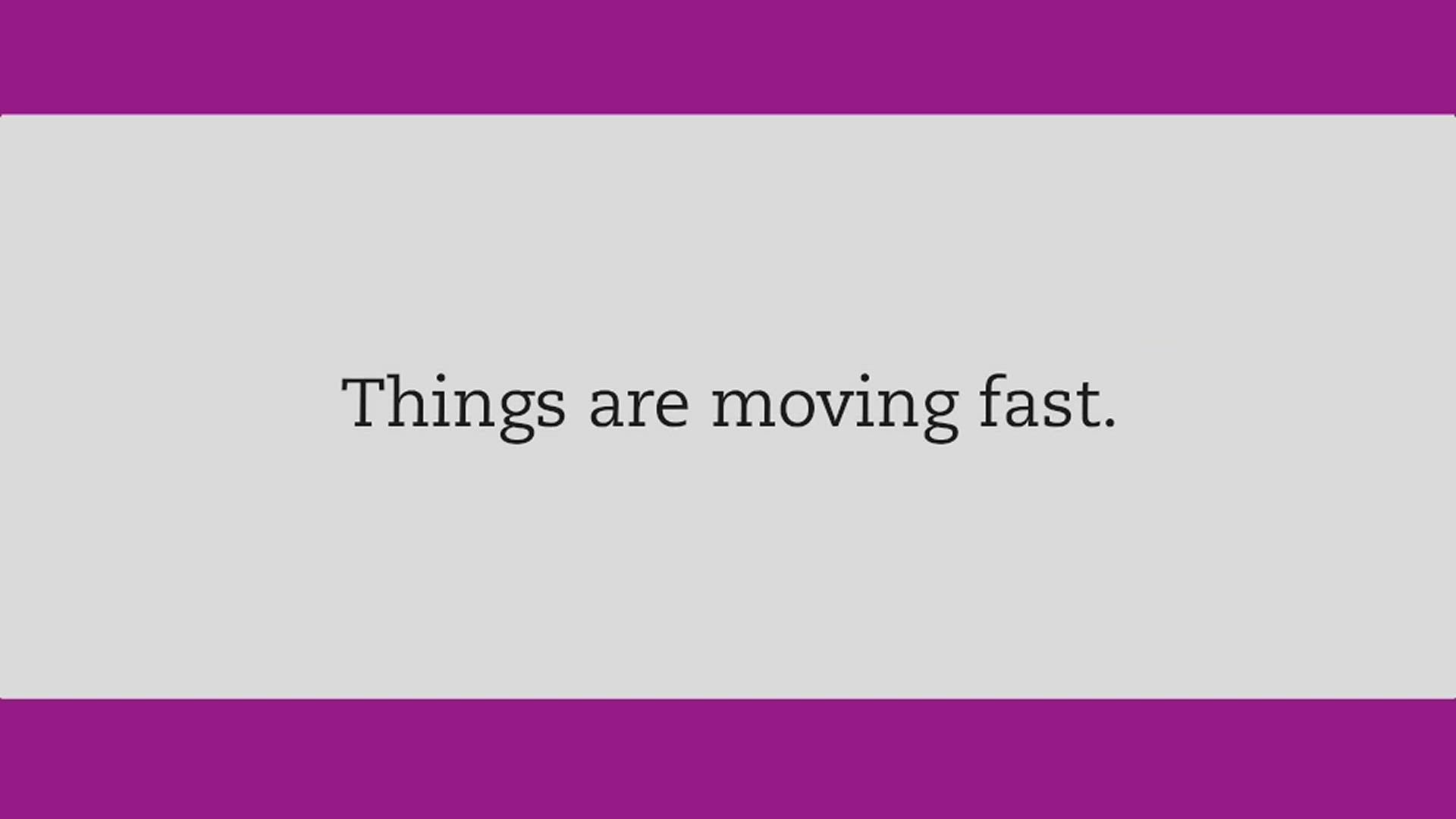 We want to know what you think-- will this quarantine order help protect Connecticut?

We have a poll right now at the top of the fox 61 facebook page and you can weigh in.

Right now about two thirds of you say no.

New coronavirus cases in the U.S. have surged to their highest level in two months and are now back to where they were at the height of the outbreak.

Cases are also surging elsewhere in the world, including in India and Mexico. But China appears to have tamed a new outbreak of the virus in Beijing, once again demonstrating its ability to quickly mobilize vast resources by testing nearly 2.5 million people in 11 days. 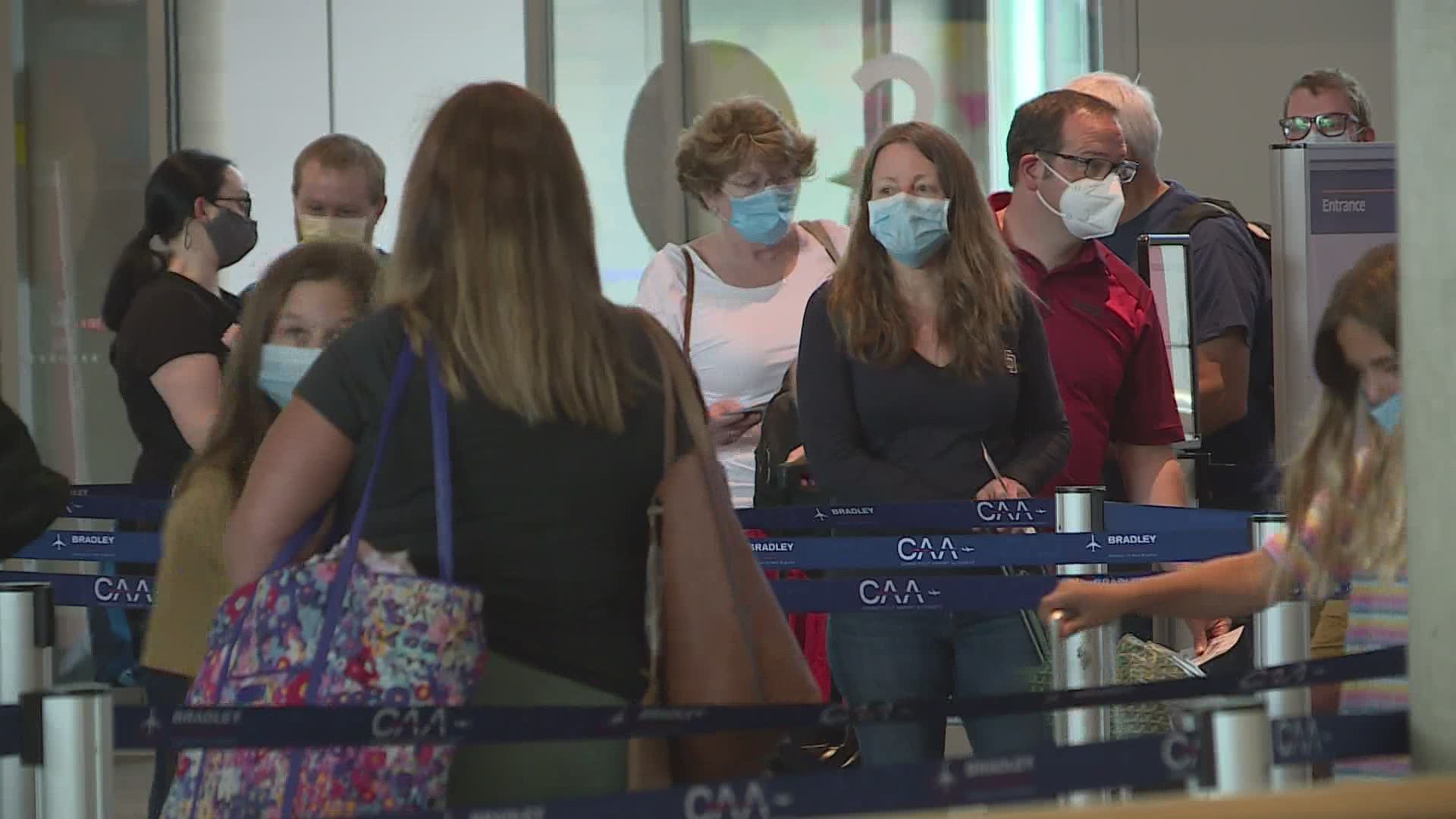 In the U.S., several states set single-day records, including Arizona, California, Mississippi, Nevada and Texas. Worldwide, more than 9.2 million people are confirmed to have contracted the virus, including more than 477,000 who have died.

Texas' governor is urging people to stay home amid a surge in coronavirus cases, with some health officials calling for a stricter stay-at-home order.

"Because the spread is so rampant right now, there's never a reason for you to have to leave your home," Gov. Greg Abbott told CNN affiliate KBTX. "Unless you do need to go out, the safest place for you is at your home."

New cases and hospitalizations are rising at their fastest rate yet -- something Abbott called "unacceptable" -- with Texas reporting more than 5,000 cases in a single day, breaking its previous record, health authorities said.

The surge comes as alarming coronavirus trends have emerged across several US states.