SEIU is the largest healthcare union in the state representing 6,000 workers at 70 nursing homes. They released two photos of workers wearing trash bags as gowns. 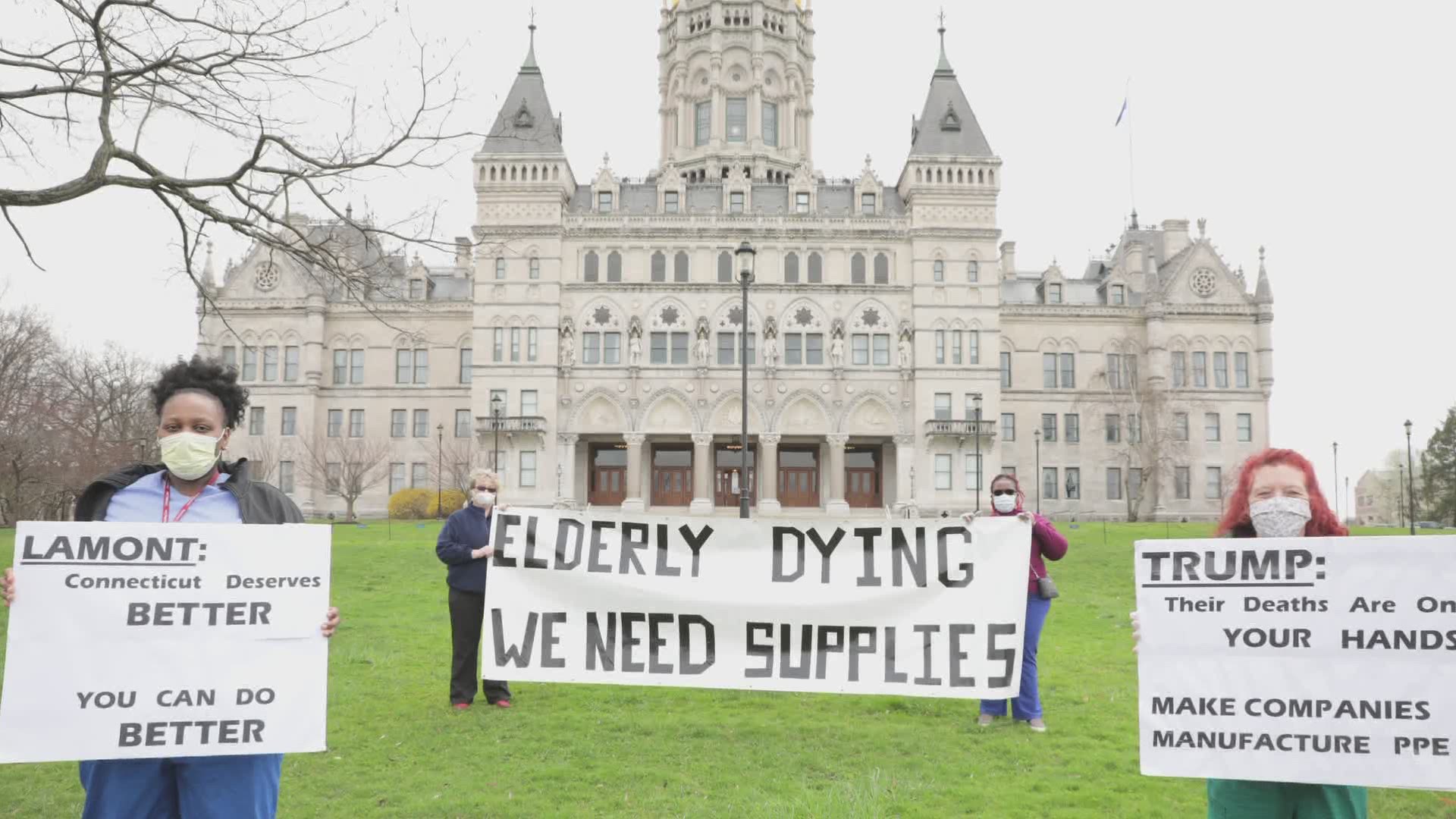 HARTFORD, Conn — A rather public battle is brewing between the state and Connecticut’s largest healthcare union. It surrounds the use and availability of personal protective equipment at nursing homes.

"Workers are wearing hefty trash bags instead of gowns. Somebody from the department of public health may not show up until the afternoon at which time maybe the administrator has gotten word that they are on their way and has handed out materials that they have been hoarding," explained SEIU President Rob Baril.

But Barbara Cass of the state Department of Public Health told FOX61 those workers chose to wear trash bags.

"We too have heard the stories and have followed up on the trash bags. In many of those cases actually in all of those cases thus far, that has been the preference of the employee," explained Cass.

SEIU fired back with a statement. "The idea that workers ‘prefer’ to wear trash bags instead of personal protective equipment is outrageous and insulting."

So what’s the truth? According to Arielle McCray, a Certified Nurses Assistant at the Summit at Plantsville, they have PPE available. It’s a non-union facility. Arielle says she wears a trash bag over her gown by choice. "I guess it’s our preference so to say, but we have the PPE available. I wear my scrubs. I wear the PPE gown and then the trash bag or they have ponchos at my facility."

On Monday all the Fairfield County nursing homes were able to pick up PPE from a distribution center at Sherwood Island State Park in Westport. And FEMA is delivering PPE to every nursing home in the state beginning in May.

Bones of contention between the state and union don’t stop at PPE. They also tell two different stories on staffing.

"There are around 15 facilities where staffing is absolutely collapsing. It’s cratered," said Baril.

But Barbara Cass said, "We have not identified any buildings yet that have had insufficient or inadequate staffing. However, I just want to reinforce that we are following up on all of those concerns."

All this as the virus spreads. It's now in 62% of the state’s nursing homes. COVID related deaths in nursing homes have spiked to 40% of the state total. The newest data showing the worst infections at Abbot Terrace Health Center in Waterbury and Parkway Pavilion Health & Rehab in Enfield. And after FOX61’s extensive coverage of family complaints, we’ve now confirmed through the department of public health that Golden Hill Rehab in Milford, Whispering Pines in East Haven and Kimberly Hall in Windsor are all the subject of active and ongoing state investigations.

The Department of Public Health is conducting both on-site and virtual inspections of nursing homes and now they're getting help from the Connecticut National Guard. The guard says they'll accompany DPH inspectors with a team of about 40 medics who have advanced infection control training.