Our news partners at the Texas Tribune break down COVID-19 positivity rates, hospitalizations and deaths in Texas from March to mid-July. 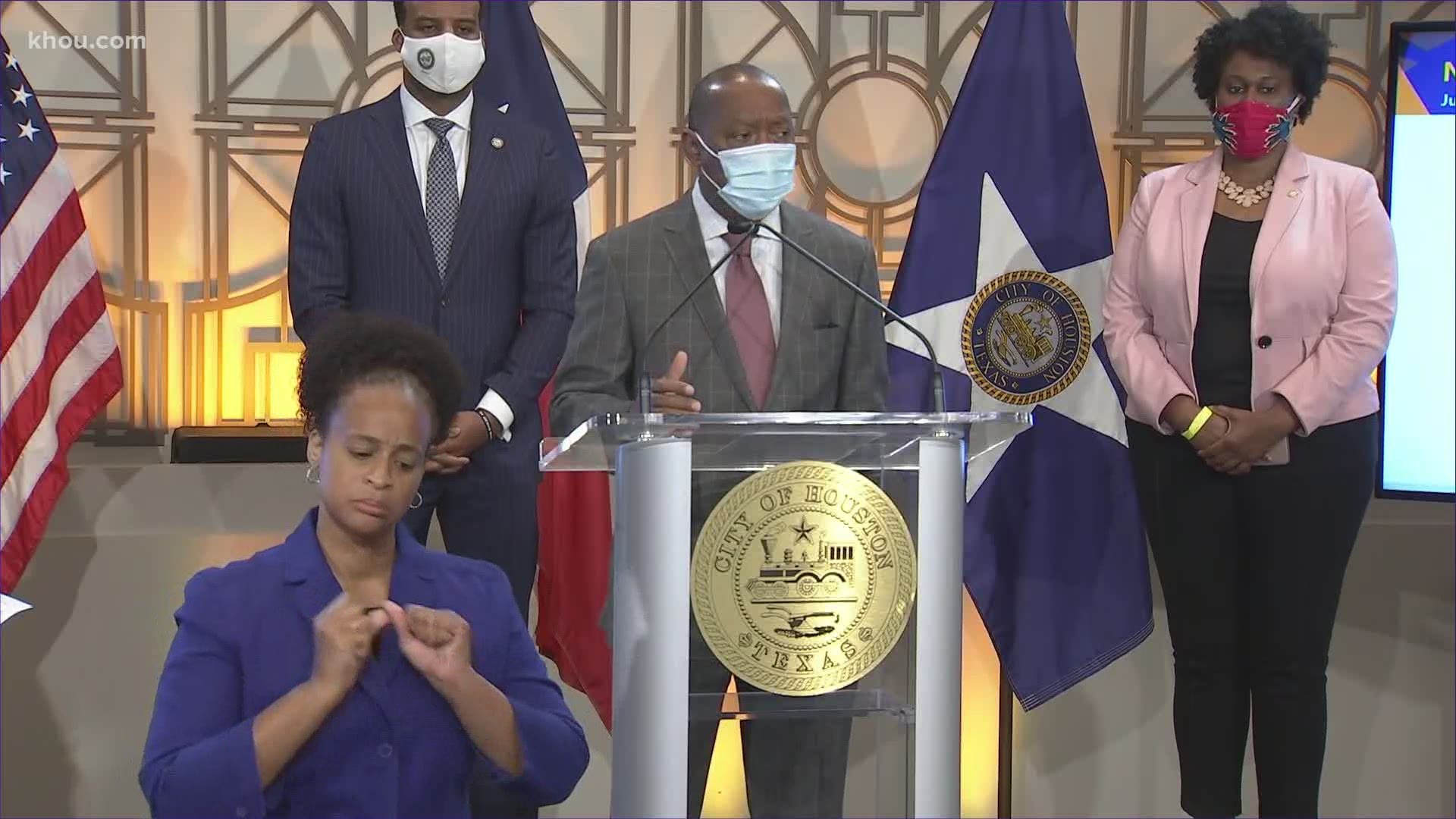 AUSTIN, Texas — The Texas Tribune is using data from the Texas Department of State Health Services to track how many people have tested positive for the coronavirus in Texas each day, how many were hospitalized and how many have died.

The state data comes from local health officials, and it may not represent all cases of the disease, given limited testing. Here's what we know about the daily numbers.

The governor is looking at two specific metrics to justify his decision to allow reopenings — the positive rate and hospitalization levels.

As hospitalizations increased dramatically in June and July, Abbott issued a statewide mandate requiring Texans living in counties with more than 20 active cases to wear a mask in public spaces, despite previously resisting calls for such an order.

RELATED: Why public health officials say there is more than one COVID-19 'death rate' to consider

He also started banning elective surgeries in many counties. And although he previously said closing businesses would be “the last option,” Abbott recently warned that an economic lockdown would be the next step if the spread of the virus doesn’t slow.

Where are most of the cases in Texas?

On March 4, DSHS reported Texas’ first positive case of the coronavirus, in Fort Bend County. The patient had recently traveled abroad. A month later on April 4, there were 6,110 cases in 151 counties. As of July 15, there are 282,365 cases in 249 counties. The Tribune is measuring both the number of cases in each county and the rate of cases per 1,000 residents.

Harris and Dallas counties, the two largest in the state, have reported the most cases and deaths.

Here's a look at the cases, cases per 1,000 people and deaths in some of the hardest hit counties as of Wednesday, July 15.

TAP HERE TO SEE ALL 249 COUNTIES

How many people are in the hospital?

Experts say there’s a lag before changes in people’s behaviors, like more social interaction, are reflected in coronavirus case data. It takes about nine to 16 days to see increased infections and generally another five to seven days to see changes in the numbers of people hospitalized, said Rebecca Fischer, an infectious disease epidemiologist at the Texas A&M University School of Public Health. (Some individuals are only diagnosed once they make it to the hospital.)

The average number of hospitalizations reported over the past seven days shows how the situation has changed over time by de-emphasizing daily swings.

Credit: Texas Tribune
The number of Texas coronavirus patients in the hospital as of July 15.

The percentage of hospital beds in use shows the strain the coronavirus can put on Texas hospitals.

In mid-June, Abbott touted the state’s abundant hospital capacity. Since then, hospitalizations have continued to rise, doubling in just two weeks.

Regional differences exist in the availability of beds — some hospital officials have reported that intensive care units are near or over capacity. In the Rio Grande Valley, the increases have stretched hospital staff, while in Houston some hospitals have had to turn away patients because of overcrowded emergency rooms.

“One of the most critical measures of the ferocity of the COVID virus is the use of intensive care unit beds,” said Britt Berrett, a healthcare management professor at the University of Texas at Dallas. “Healthcare professionals will need to be vigilant in monitoring the time it takes from diagnosis in the emergency room to treatment and admission into the ICU bed.”

RELATED: Next vaccine trial will test 30,000 people at 87 sites across US, including in Houston

How many people have died?

The first death linked to the coronavirus in Texas occurred March 16 in Matagorda County. As of July 15, 3,432 people who tested positive for the virus have died.

On July 15, Houston set a record for single-day deaths with 16.

Credit: Texas Tribune
This graphic tracks the number of deaths in Texas each day since the coronavirus pandemic began.

How have the number of cases increased each day?

On March 24, the Texas Department of State Health Services changed its reporting system to track case counts directly from counties instead of relying on official case forms, which came in later and caused the state’s official count to lag behind other tallies. Increases in testing also led to more detected cases. In May, a large one-day spike was reported after testing was done at meatpacking plants in the Amarillo region.

Since June, the number of new cases each day has trended upwards.

Credit: Texas Tribune
Note: On March 24, the state changed how it reported numbers resulting in a sharp increase in cases. On July 15, the state removed 3,484 probable cases from Bexar County that had been previously included in the cumulative case count, stating that only confirmed cases are included.

The average number of cases reported over the past seven days shows how the situation has changed over time by deemphasizing daily swings. The number of new cases reported drops on weekends, when labs are less likely to report new data to the state.

Note: On March 24, the state changed how it reported numbers resulting in a sharp increase in cases. On June 16, the state included 1,476 cases previously reported by the Texas Department of Criminal Justice from Anderson and Brazoria County in its cumulative case count. The new cases for June 16 do not include those cases.

How has the positivity rate changed?

In early May, Abbott said a rate over 10% would be a “warning flag.” The state exceeded that mark in June for the first time since April.

Credit: Texas Tribune
In early May, Abbott said a rate over 10% would be a “warning flag.” The state exceeded that mark in June for the first time since April.

Note: On May 19, the state started breaking out virus tests from antibody tests. Previously, about 50,000 total antibody tests were counted as virus tests, artificially deflating the positivity rate. After a system upgrade on June 7 resulting in incomplete test data, the state revised the test numbers for June 6 to show a decrease in total viral tests. As a result, the daily positivity rate for June 6 was incalculable because there were no new viral tests reported.

The positivity rate differs from the infection rate. In order to obtain an infection rate, everybody would need to be tested, said Hongwei Zhao, an epidemiology professor at the Texas A&M University School of Public Health.

How many people have been tested?

As of July 15, Texas has administered 2,924,288 tests for the coronavirus since March. Expert opinions differ on how much larger that figure needs to be. We do not know the number of Texans who have gotten a test because some people are tested more than once. Tests from private labs, which make up the majority of reported tests, are not deduplicated. The state’s tally also does not include pending tests.

The average number of tests reported over the past seven days shows how the situation has changed over time by deemphasizing daily swings. In April, Abbott set a goal of 30,000 daily tests in the state.

The DSHS data also might not include all of the tests that have been run in Texas. The state has said it is not getting test data from every private lab, and as of mid-May only 3% of tests were coming from public labs. The state has since stopped differentiating between tests reported by public and private labs.

Even as demand for testing has increased, both public and private labs continue to prioritize Texans who meet certain criteria, but every private lab sets its own criteria.

On May 21, DSHS disclosed for the first time that as of a day earlier, it had counted 49,313 antibody tests as part of its "Total Tests" tally. That represents 6.4% of the 770,241 total tests that the state had reported on May 20. Health experts have warned against counting antibody and standard viral tests together because they are distinctly different tests. Antibody tests detect whether someone was previously infected, while standard viral tests determine whether someone currently has the virus.

Editor's note: This story is from our partners at the Texas Tribune. Read more on the breakdown of Texas COVID-19 cases here.