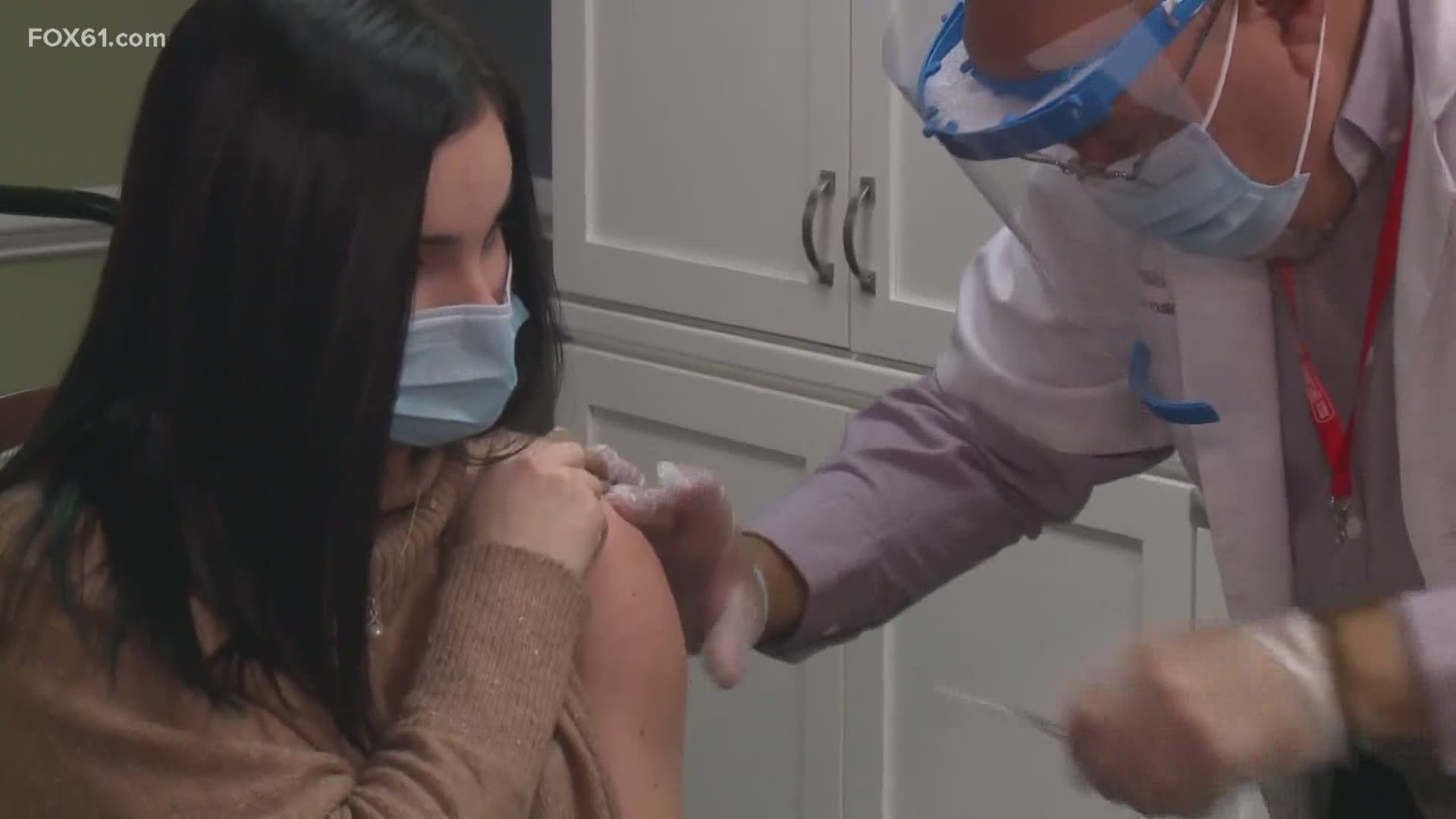 HARTFORD, Conn — In his first major departure from CDC guidelines, Gov. Ned Lamont announced that instead of prioritizing vaccines for essential workers or people with co-morbidities, he will go with a strictly age-based approach.

Citing confusion in other states, Gov. Ned Lamont said an age-based approach to vaccine priority would streamline the process and is the best way to get the most shots into the most arms as quickly as possible. But other people say the approach is too simple and that such a complicated and serious issue deserves more nuance.

Laura Doninger’s son is only 31 years old. Under the age-based tiers, he may have to wait until May to get a COVID vaccine. "That seems inconsistent with what the priorities have been up until now which has been to take care of the most vulnerable citizens," Doninger, of Hamden said. Her son had a double lung transplant. "If he gets COVID he can’t survive it."

Sarah Mora of Shelton is also young. "We all feel like we’re being abandoned," she said. "It seems like the Governor is just taking the easy way out." Mora has a suppressed immune system and was diagnosed with four of the CDC listed co-morbidities. "There is a list that the CDC gives," she said.

But regarding the CDC guidance Gov. Lamont said, "It was sort of shocking, I thought, some of the conditions that were not listed by the CDC. Asthma, HIV, type 1 diabetes."

The Lamont administration says the CDC’s strategy wasn’t consistent with a smooth implementation. "We thought we did better narrowing the aperture. Being very clear about who is eligible. Being able to show up with a driver's license. 55 and above is very easy as a metric to track and then every three weeks we will be able to expand that to another age group."

The logistics of prioritizing qualifying conditions and proof of eligibility would have slowed down and overwhelmed the system. "When we did the math on how many Connecticut resident would have been included had we gone down that path we got to about 2/3rds to three quarters of the remaining adult population," explained Connecticut Chief Operating Officer Josh Geballe.

At Monday's announcement, the Governor showed a chart of Connecticut’s COVID death toll. "We found a close correlation between age and risk," said Lamont.

But those who are vulnerable said the numbers don’t tell the whole story. "He’s going by the numbers but her doesn’t realize that a lot of us are putting off medical care that we need because we are afraid we are going to get COVID," said Mora.

Some are also skeptical of the decision to carve out priority clinics for teachers. "By having it be by age for every group except for that group it feels very political to me," said Doninger. But Lamont said it wasn't just teachers' unions who advocated, "Everybody has an advocacy group and they’ve been knocking on our doors for weeks." The administration says it has more to do with equity for students and eliminating school shutdowns. "When you are fully vaccinated, and you have an exposure to COVID 19 you don’t have to quarantine anymore," said Geballe.

The Lamont administration is also taking some heat for their decision to not prioritize essential workers. The announcement came on supermarket workers appreciation day. Keri Hoehne, the Vice President for United Food and Commercial Workers Local 371 said, "The irony is not lost on my members. They were hailed as heroes at the beginning. They were marching to work while the rest of us were staying home." 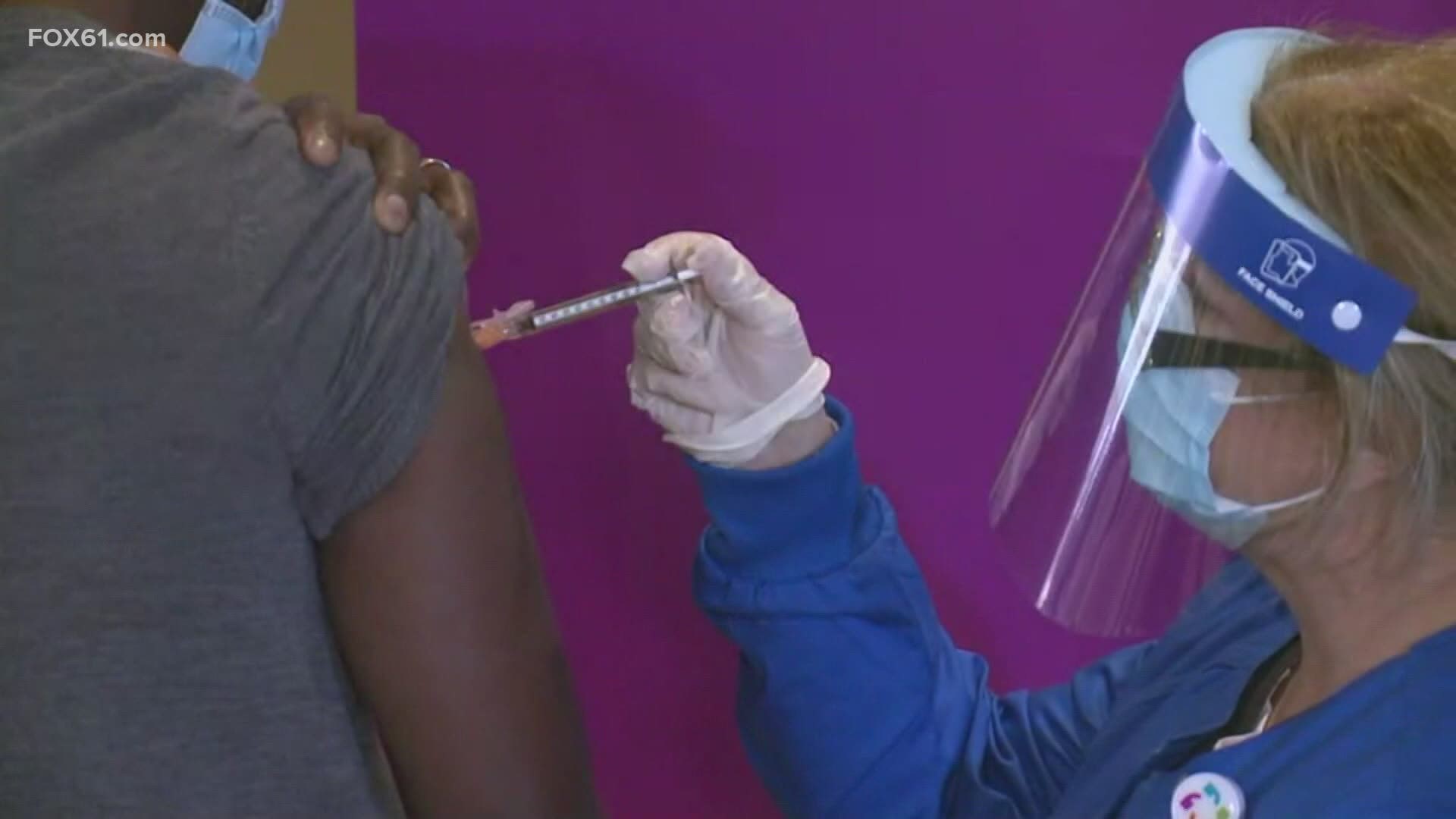 But the administration says adding essential workers and defining specific roles would have been too confusing. "But what about a gas station convenience store they may sell food or what about a liquor store or what about the people who deliver to those stores?" asked Geballe. "Once you start making exceptions it gets really complicated," said Gov. Lamont.

The supermarket workers union told FOX61 they feel abandoned. "The Governor's office has continued to say that they were going to be following the CDC guidelines and this was not within those guidelines. As Governor you have to do hard things and make hard decisions and we would have hoped that more thought would have gone into how to essential workers but absent that we would have welcomed some communication," said Hoehne.

Lamont pointed to a list from the CDC that would have bogged down the vaccine access pipeline. "That broad list would have incorporated over 1/3rd the population of the state of Connecticut. And along the way they gave us a board list of folks with co-morbidities. Those most likely to suffer health effects and that would have represented about 1/3rd of the population," remarked Lamont. "You get all the additional complexity without and real clear benefits, so we decided to avoid going down that people and keep it simple. Focusing on shots in arms, equity, and access," explained Geballe.

But Rochelle Palache who represents the essential workers of SEIU 32 BJ told FOX61 the Governor, who’s been an ally
on paid family leave and the minimum wage didn’t make the right decision. "This really came as a shock to all of us. It’s more of a disappointment. It might not get to the people who need it the most. It might not get to our members who live and work in the cities who are mostly black and brown," said Pelache.

But the Lamont administration says they continue to prioritize equity. They are giving providers in communities high on the social vulnerability index scale as much vaccine as they can handle and are working on education and mobile clinic access. "So that’s what the Governor announced yesterday that we are going to be setting specific targets for those major providers for those communities to make sure they are getting a fair share and the same percentage of those people vaccinated as we are in other parts of the state," explained Geballe.

Last week the state got 70,000 first dose vaccines alone. This week we are getting 95,000 so they say the key to getting everyone vaccinated as quickly as possible is keeping the system simple when it comes to ease of access.

RELATED: COVID-19 Vaccine in CT: What you need to know