However, rates were already slowly climbing around the time of approval. 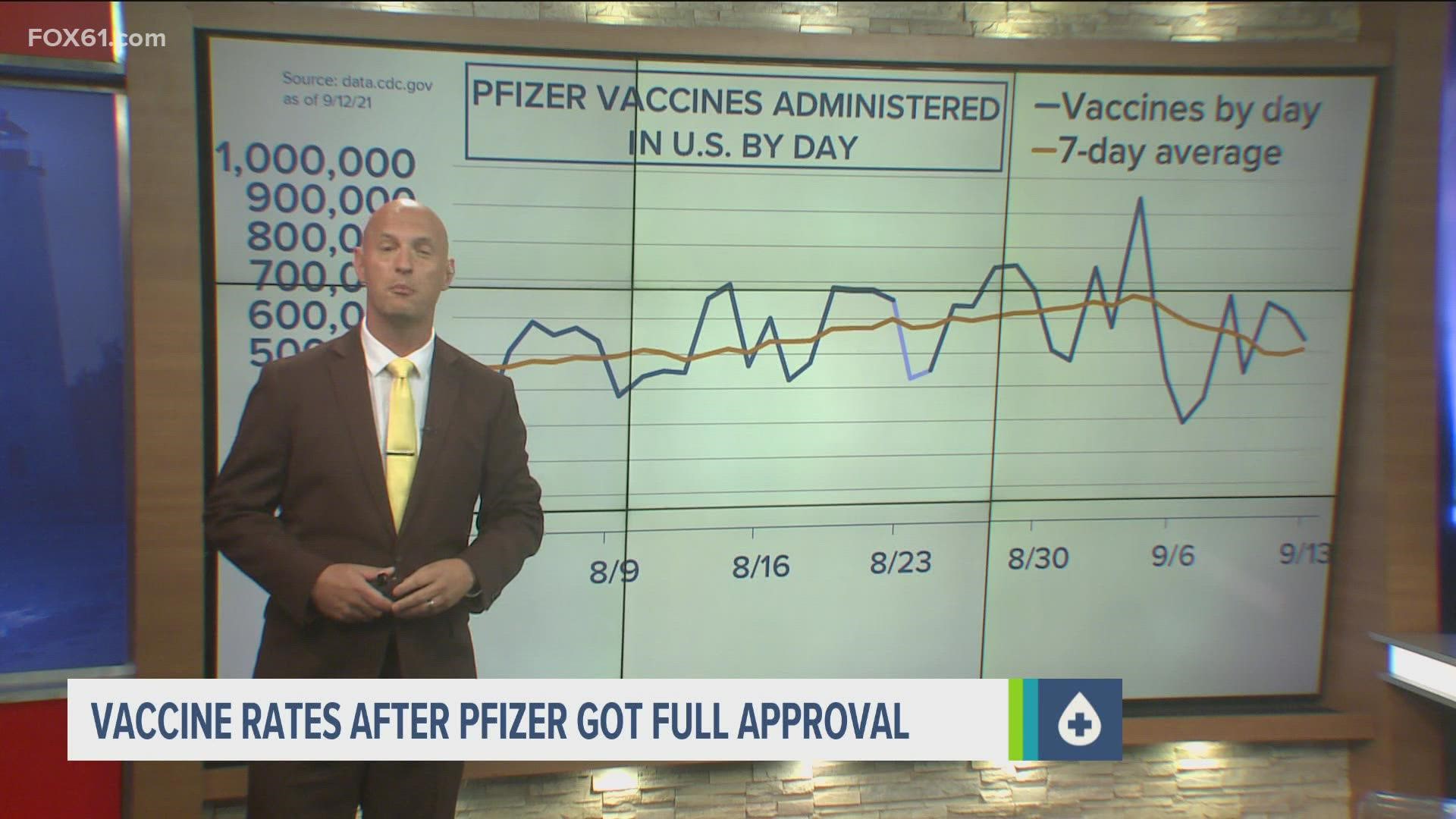 HARTFORD, Conn — It's been more than three weeks since the federal government fully approved Pfizer's COVID-19 vaccine for everyone aged 16 and up.  At the time of approval, there were hopes it would result in a boost in the nation's vaccination rate - the rationale being some vaccine-hesitant people would be reassured by the FDA's vote of confidence.

Did that bump happen?  By looking at the Centers for Disease Control (CDC) and prevention's daily vaccination updates, it's hard to see any real effect from the announcement.

That's not to say the vaccination pace was stagnant. After the seven-day rolling average of vaccinations hit a recent low of just over 500,000/day on July 11, that average steadily crept up throughout the rest of July and all of August, a rise that coincided with a rise in cases from the delta variant.

The image below shows there was no substantial change from the days preceding the approval on August 23 to the days following it.

Credit: FOX61
While the daily number of Pfizer vaccinations increased during August, the news of the vaccine's approval did not appear to cause a bump in the vaccination rate.

The Moderna vaccine's numbers also appeared to stay relatively stable during that time frame, although they did appear to level off a bit after the announcement, before both vaccine's numbers started falling in the past few weeks.

Credit: FOX61
The Pfizer vaccine's approval also appeared to have no real effect on the pace of administration of Moderna's vaccine.

RELATED: Report: COVID vaccines for kids 5-11 could be approved by end of October

Despite the falling numbers, Connecticut's relatively high vaccination rates appear to have helped blunt the spread of the delta variant.

While these numbers are not necessarily predictive of the future, the 14-day rolling average for positivity has dipped back under 3% for the first time since early August.

Credit: FOX61
The delta wave of the COVID pandemic appears to have peaked in Connecticut.

If we are past this peak, the peak would have been at a lower level than it was during April's spring break bump, and far below the winter surge, before vaccines were commonplace.  As of September 13, 67.2% of the state's population has been fully vaccinated, compared to a national percentage of 53.9%.