The Mayflower II leaves Mystic Seaport on its way back to Plymouth, Mass

The beloved vessel is scheduled to be towed on Monday from the preservation shipyard at Mystic Seaport Museum to New London for two weeks of sea trials. 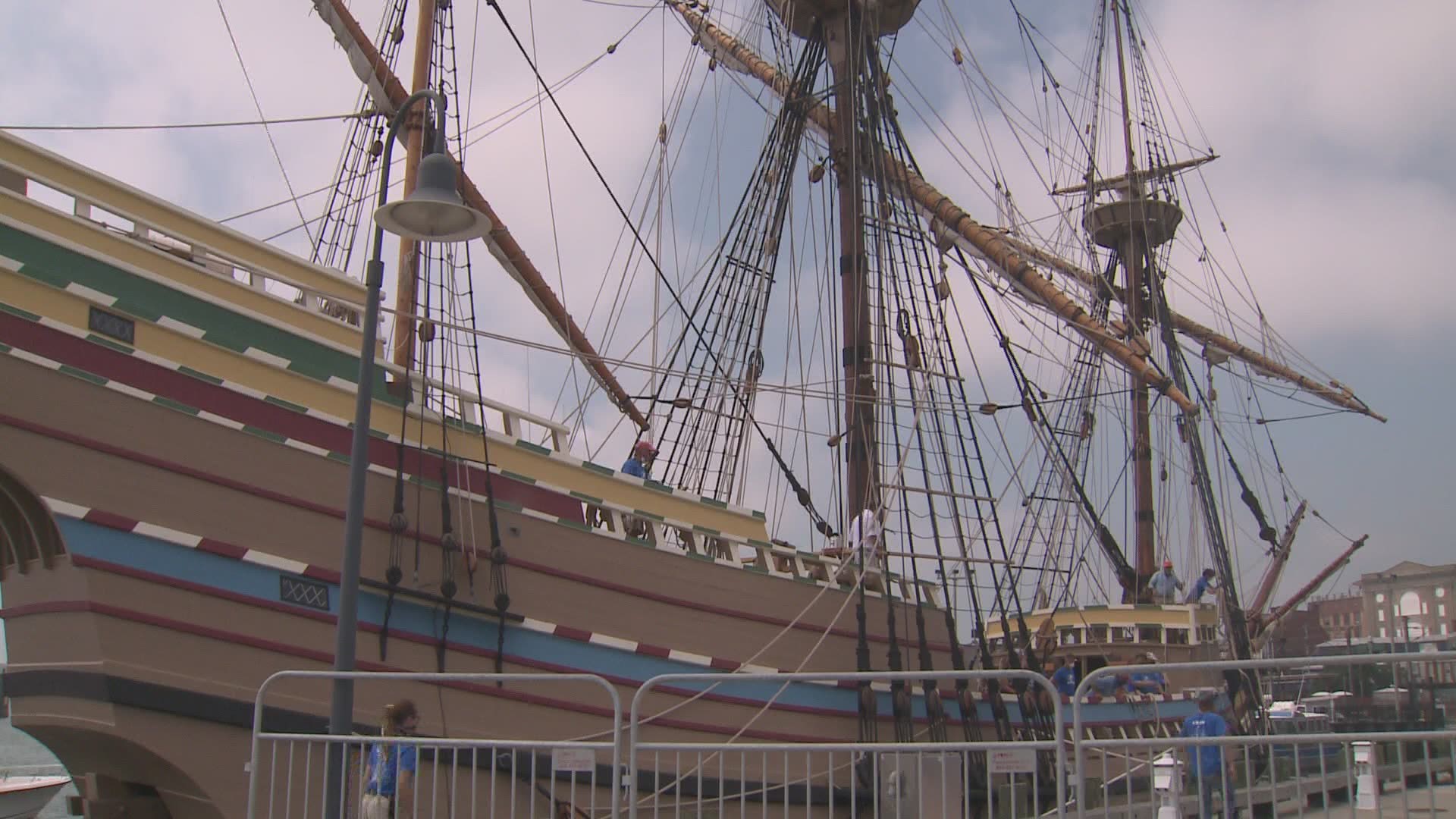 STONINGTON, Conn. — Mystic Seaport is rich in history and for the past several years they’ve been working on a piece of history.

The Mayflower II is a replica of the original Mayflower.

It was July of 1620 when the mayflower set sail from England. Exactly 400 years later, it’s replica the mayflower II departed Mystic on its trip back to Plymouth, Massachusetts.

“ It was built in 1957 in England and it was built to the best of their ideas of what that ship would have been at the time. There were no records, there were no plans of the original ship. There were actually five ships named mayflower at the time. So they believe the dimensions are close and she’s similar to other vessels of the time,” said Chris Gasiorek, VP of Watercraft Preservation, Mystic Seaport Museum.

For the past four years a 63-year-old ship has undergone a complete restoration at Mystic Seaport.

“Basically if you can imagine a complete disassembly and a reassembly. At one point we had her split into three sections like a wedding cake, supported mid shift and her whole bottom removed so that we could then put a whole new bottom on her. If you can imagine completely disassembling some thing and putting it back together with about 70% new wood and most of that wood came into our shipyard basically as a tree and is leaving as a beautiful ship,” said Gasiorek.

After years of hard work crews at Mystic Seaport waved goodbye to the Mayflower II. A tugboat brought it from Mystic to New London this morning. That’s where they’ll spend the next two weeks undergoing training and sea trials before the ship heads home to Plimouth plantation.

It’s not goodbye it’s just see you soon. In two weeks the “Mayflower II” will make the one week voyage back to Plimouth Plantation where it will be on display and visitors will be able to come aboard.

“ People will absolutely be able to visit the ship very soon it’s about a three week process before we get home to Plymouth Harbor and very soon after that, likely the week that we get home we will be able to welcome guests back to Mayflower and we can’t wait to do so obviously it’ll all be physical distanced and safe, but we can’t wait to have people back aboard the ship,” said Kate Sheehan, of Plimouth Plantation.

The original plan had called for a celebratory departure in late April with several stops at southern New England ports before a May arrival. That was to include being led into Boston Harbor under sail with the USS Constitution for a maritime festival to mark the 400th anniversary of the original Mayflower voyage.

But those plans were scrapped because of the pandemic.

The ship is now planning to make two overnight stops, without fanfare or crowds. The public can follow the trip online. 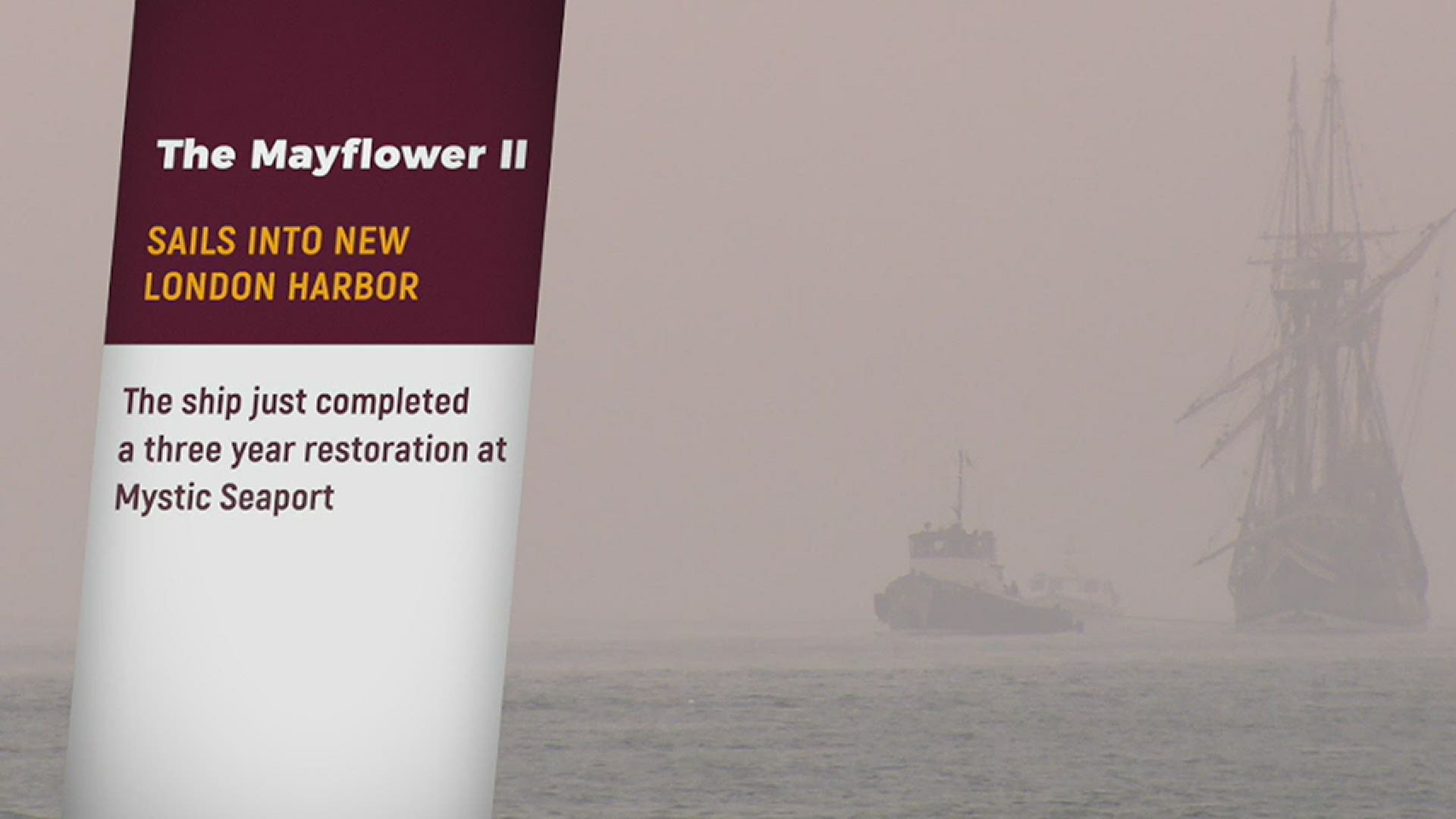 Don't miss the Mayflower II as we bid farewell tomorrow morning at 9:00 am. The public will not be able to view the departure from the Museum; however, there are several vantage points along the ship’s route down the Mystic River. pic.twitter.com/sLY7bauiaE

The Mayflower II has been a major tourist attraction and educational tool since it arrived in Plymouth as a gift from England in 1957.

Stabilization efforts began in 2014, with the ship spending part of the year in Mystic. Continuous restoration work began at the seaport museum in 2016, with shipwrights from the seaport museum and artisans from Plimoth Plantation engaged in the work.

The ship’s keel was saved, but nearly 75% of the vessel is new, Sheehan said.

“The hull planking was completely replaced with 20,000 board feet of Danish white oak that is absolutely some of the most beautiful wood that I have ever seen and the shipwrights have ever seen,” she said.

Since being rechristened in 2019, craftsmen have been doing painting, rigging, finishing work, and installing new features such as a state-of-the-art fire suppression system onboard.

RELATED: The Mayflower II almost ready for launch in Mystic

Plans for the Mayflower II to take part in tall ship celebrations and other sails — including a 400th anniversary commemoration in Provincetown, Massachusetts, in September — have been put on hold.

For at least the remainder of this year, the ship will be docked at Pilgrim Memorial State Park, Sheehan said.

“To the extent that it’s possible to mark her arrival with any sort of event, then we will do so,” she said.

“Even under the most mundane of circumstances, Mayflower tends to attract a crowd, so even if a crowd gathers organically, we’ll communicate that they need to follow the state’s safety guidelines regarding physical distancing and mask-wearing.”