He nearly killed his wife after a Ga. judge refused to order him to a mandatory violence intervention program

CHEROKEE COUNTY, Ga. — When Judge Michelle Homier ran for re-election in 2016, she spoke to a group of Cherokee County Republicans about her family, public service and time on the bench.

“I have provided accountability,” said Homier in a May 2016 YouTube video posted by the county’s GOP party. “Each case I judge individually. I judge it based it on the facts.”

The video offers a small glimpse into her judicial philosophy since elected as a state court judge in July 2012.

11Alive's investigative team, The Reveal, has uncovered Homier's claims of accountability does not always live up to reality in her courtroom.

Our investigation found the judge handing down numerous sentences for defendants which fall below Georgia's state mandated guidelines. That includes a repeat domestic violence abuser and drivers charged with DUI during her time on the bench and as prosecutor with the Cherokee County's Solicitor's office.

One of those cases involves a defendant named David Kemp. In 2018, he was arrested for family violence and for violating a protective order. It was his second offense related to a similar charge involving hitting his wife.

According to court transcripts, prosecutors requested that Judge Homier sentence Kemp to something called a family violence intervention program (FVLIP). It was more than just a suggestion -- it was essentially a reminder to Homier that this program is required under Georgia law for habitual domestic violence offenders.

Homier declined to send Kemp to the program. Instead, she gave him time served and ordered him to anger management. According to sentencing documents, Homier wrote FVLIP is “not applicable per facts.” The judge provided no further explanation.

A few weeks later, Kemp severely beat his wife again, nearly killing her. He plead guilty in July, 2019 and was sentenced to 40 years in prison by a Cherokee County Superior Court Judge.

Stephanie Woodard is the Hall County’s Solicitor General and chair of Georgia’s Commission on Family Violence.

“This is a case that shocks the consciousness,” said Woodard. “The public in general aren’t used to seeing this.”

The solicitor says anger management is not an inappropriate treatment for a domestic abuser. Woodard says FVLIP provides much more accountability, which includes mandatory attendance over 24 weeks.

“It was a call to arms for me,” said Woodard in reaction to Homier’s sentencing decision.

Homier's history of handing down or recommending lenient sentences didn't start on the bench. It started during her time at the Cherokee County Solicitor’s Office when she worked as a prosecutor. 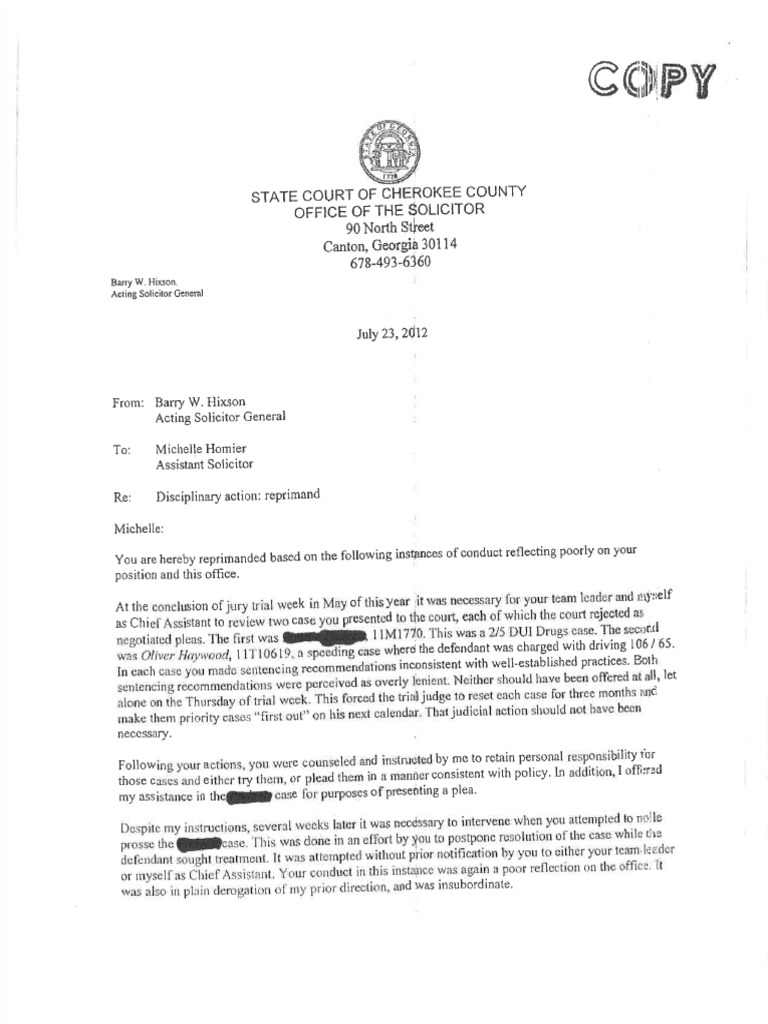 One case involved a man charged with driving 106 mph in a 65 mph speed limit. Hixon said Homier went to the clerk’s office and reduced the driver’s speed to 84 mph. The written explanation on the ticket was that this was done “in the interests of justice.”

In response to the reprimand, Homier wrote that she determined a reduced sentence was appropriate for the DUI offender after learning he suffered from a mental illness. At one point, she said she could no longer be fair and impartial in the case and asked to be re-assigned.

“I feel too much sympathy at this point for this particular defendant. I can picture myself in his shoes in a heartbeat,” wrote Homier in a July 2012 email.

A few months after writing that email, Homier, as an elected judge, allowed a driver ticketed for speeding 93 mph in a 65 mph zone to post an essay on social media instead of paying a fine. The surprised driver posted her reaction on Twitter while in the court room, “I got out of a ticket by posting on FB about the dangers of speeding…#ByeFelicia,” wrote Carly Blevins, the ticketed driver.

RELATED: He was convicted of murder by a jury of his peers within three hours, then the judge stepped in

According to a report created by the county’s DUI and drug court administration, Homier has sentenced at least seven repeat DUI offenders below what the state law requires from 2016 to 2019. These records were obtained through an public records request. Cases were then reviewed by The Reveal to determine sentencing leniency.

One of the DUI repeat offenders is Jamie McKenzie. Police arrested him for his third DUI in ten years in June 2018. He was on probation for another DUI offense when it happened. By state law, McKenzie should have been sentenced to at least 15 days in jail. Homier allowed him to serve just three days.

According to June 2019 sentencing documents, Homier originally sentenced McKenzie to 120 days in jail, but then immediately suspended the remaining 117 days behind bars “just as long as [he] remains alcohol free and in compliance.” Homier gave him the relaxed sentence knowing that he had repeatedly violated his probation multiple times, including testing positive for marijuana, missing two drug tests and the latest DUI arrest.

Caren Morrison is a law professor at Georgia State University and a former federal prosecutor. Morrison says the cases reviewed by The Reveal are not surprising and cautioned the public not to over-react. She says state law gives judges wide authority to determine appropriate punishment.

“So, in any given courthouse you can have people in the same exact crime going in and getting maybe two years or ten in another. That’s how the system works,” said Morrison.

While not necessarily unheard of, Morrison says a steady stream of lenient sentencing can send a message to the community.

“So, if a judge is consistently lenient in a particular class of cases, that could potentially send a message that the judge doesn’t take those types of crimes that seriously, or believes that those crimes are treated overly harshly legislatively,” explains Morrison.

“This is more unusual because while there is debate about nartcautics laws, there aren’t debates in the same way about whether driving under the influence should be treated more leniently,” said Morrison in response to Homier’s DUI sentences under state guidelines.

The Reveal reached out to Homier multiple times for an interview. She never responded. Just before a campaign event this Tuesday, The Reveal investigator Andy Pierrotti questioned Judge Homier in person. She declined again and referred us to court administration.

According to an email from court administrator Lynn Epps, Georgia's Code of Judicial Conduct prohibits Homier from speaking.

“It would be improper for a judge to answer questions about impending or pending legal matters before the judge. Even a closed case could have a future court proceeding and thereby become a pending matter,” wrote Epps. “For these reasons, Homier will not be able to answer any questions you may have regarding her rulings, sentencing, or judicial philosophy.”

When asked how the public can hold elected judges accountable for their actions if jurists won’t talk, Epps said “that’s a decision voters can make during elections.”

Some legal experts disagree with Epps and the attorneys who helped her prepare the response. That includes Morrison, multiple district attorneys and solicitors.

“I think it is important. I think it serves a teaching purpose to explain how the law works and what consequences to certain actions are,” said Morrison. “It also helps the public understand what the judge is thinking so that it’s not a twisted political gain or profit come election time.”

Back in 2016 during her campaign pitch, it appears Homier supported similar transparency.

“I’m authentic. I speak to you the same way is the same way I’m going to speak to an individual, a defendant who is charged, a victim, a family,” said Homier.

Nearly four years later, Homier may say she speaks her mind, but that doesn’t include when she’s accused of levying lenient sentences.

They were arrested but didn’t go to court: Does Atlanta's bail reform lack justice?

The Reveal is an investigative show exposing inequality, injustice, and ineptitude created by people in power throughout Georgia and across the country. It airs Sunday nights at 6 on 11Alive.