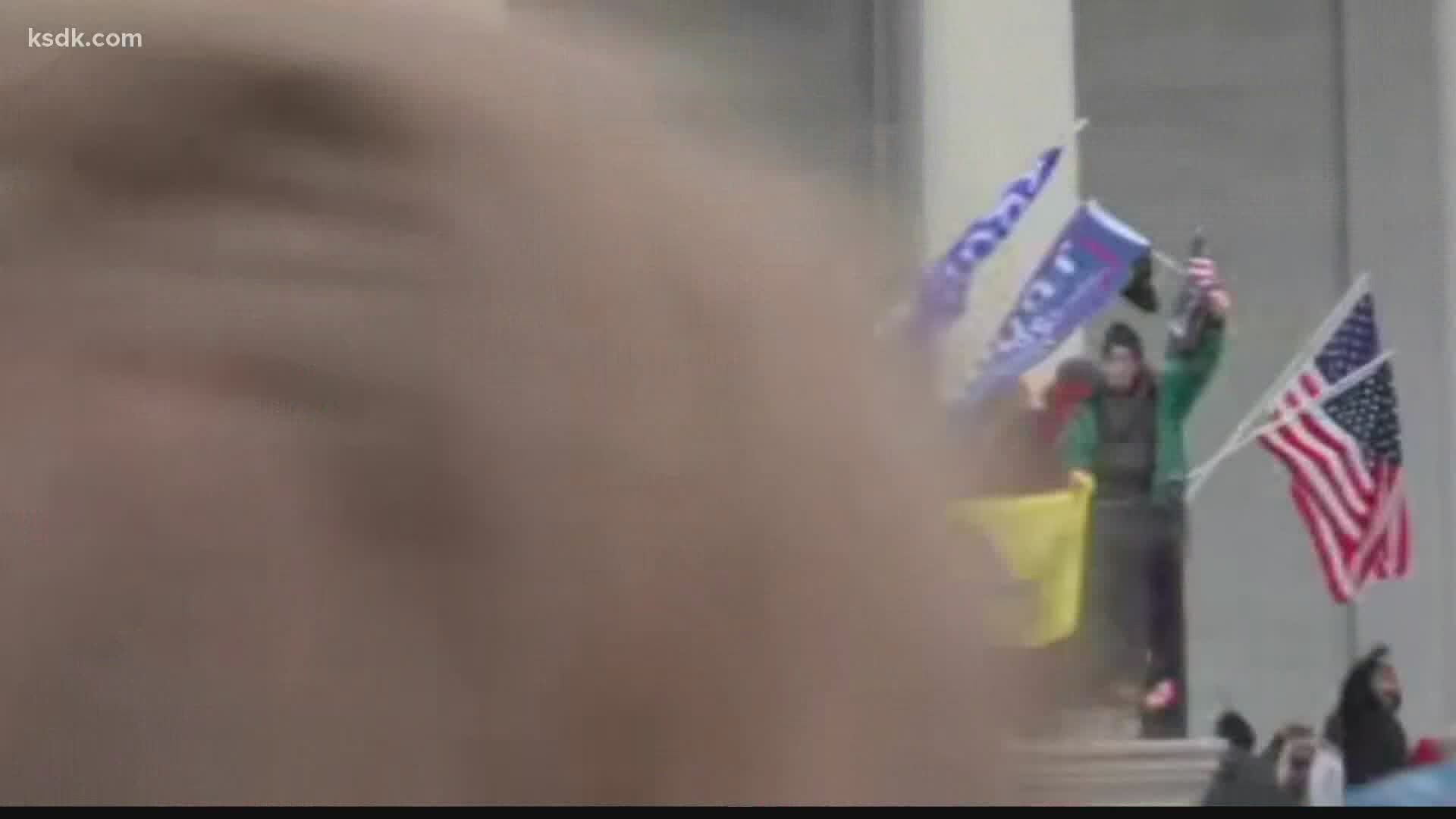 ST. LOUIS — An Arizona man who was seen in viral photos from the U.S. Capitol riot has tapped a well-known St. Louis attorney to represent him.

Chansley also goes by the name Jake Angeli and has described himself as the "QAnon Shaman."

He was photographed inside the Capitol on Jan. 6 wearing a furry hat with horns, face paint and no shirt as part of the group of pro-Trump rioters who stormed the Capitol while lawmakers were trying to confirm the electoral college certifications of Democrat Joe Biden's presidential election win.

Last week he was charged in federal court with knowingly entering or remaining in any restricted building or grounds without lawful authority, and with violent entry and disorderly conduct on Capitol grounds. More than 25 people have been charged in connection with the riot.

Chansley, 33, is currently being held in a federal facility in Phoenix, which is run by an independent contractor, according to Watkins. He’s being held in quarantine custody in accordance with COVID-19 mitigation protocols.

“Mr. Chansley is an American; he served honorably in the U.S. military,” Watkins said in a press release. “He has zero criminal history. He is a lover of nature, routinely practices meditation, is an active practicer of yoga and eats only organic food. He took seriously the countless messages of President Trump. He believed in President Trump. Like tens of millions of other Americans, Chansley felt — for the first time in his life — as though his voice was being heard.”

Watkins claims Chansley had no part in the violence.

Prosecutors say Chansley climbed up to the platform where Pence had been presiding moments earlier and wrote a threatening note.

It read: "It's only a matter of time, justice is coming."

“Mr. Chansley did not hide his identity,” Watkins said. “He was unarmed. He was not violent. He was not destructive. His attire was consistent with his long-held Shaman beliefs. While in the Capitol Building, he followed the instructions of supportive and respectful law enforcement personnel. He did not bear arms, but rather, sported a megaphone…so his voice could be heard. When alerted to the fact that federal law enforcement officials were interested in him, he immediately and peacefully surrendered himself to the FBI.”

Watkins said it would be "appropriate and honorable" for the president to pardon Chansley.

"Given the peaceful and compliant fashion in which Mr. Chansley comported himself, it would be appropriate and honorable for the president to pardon Mr. Chansley and other like-minded, peaceful individuals who accepted the president’s invitation with honorable intentions.”

But Watkins said that didn’t include Chansley.

"He is responsible for his actions. He regrets where he is today," Watkins said during an interview with 5 On Your Side’s Robert Townsend.

12 News, 5 On Your Side's sister station in Phoenix, has documented Angeli at numerous rallies, marches and events throughout the past year, ranging from Trump rallies to Black Lives Matter marches.

At these events, he claims to be part of QAnon and is usually shouting about conspiracy theories, with a sign that says "Q Sent Me."

QAnon has ricocheted around the darker corners of the internet since late 2017, according to the Associated Press. The baseless theory centers on an alleged anonymous, high-ranking government official known as “Q” who shares information about an anti-Trump “deep state” often tied to satanism and child sex trafficking.

In a video message on Jan. 7, President Trump condemned his supporters' riot at the Capitol.

"America is and must always be a nation of law and order," Trump said in the video. "The demonstrators who infiltrated the Capitol have defiled the seat of American democracy. To those who engaged in the acts of violence and destruction, you do not represent our country. And to those who broke the law, you will pay."

On Jan. 13, Trump became the first president in history to be impeached twice. The impeachment process will head to the Senate next. It's unlikely that a trial would happen before the Jan. 20 inauguration of President-elect Joe Biden.

RELATED: 'My son is a great patriot:' Mom of horned Arizona protester speaks out