A team of four Biomedical Engineering students from UConn are breaking new ground in the fight against Spastic Cerebral Palsy. They’re all women, which is unusu... 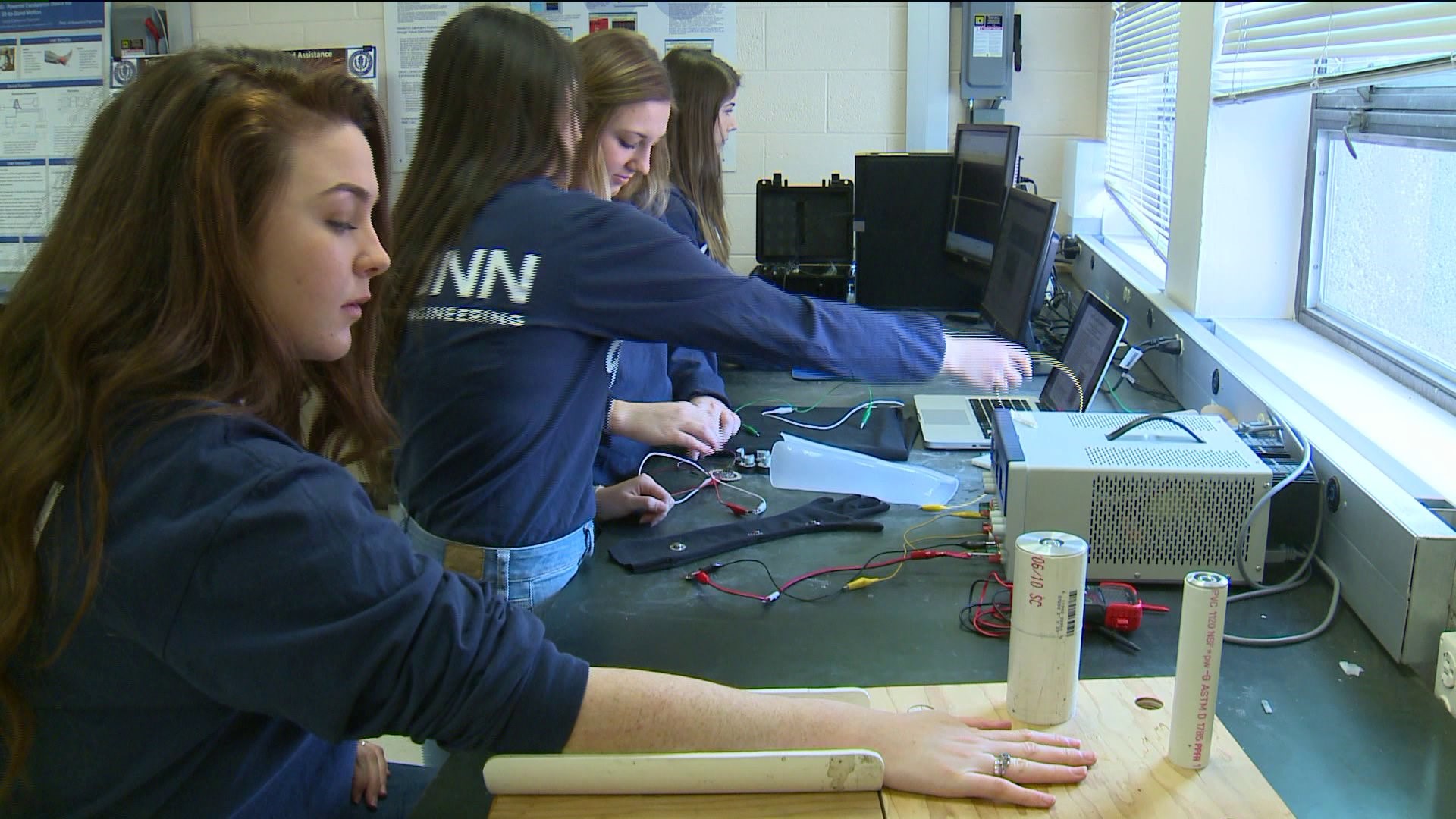 A team of four Biomedical Engineering students from UConn are breaking new ground in the fight against Spastic Cerebral Palsy. They’re all women, which is unusual, but that’s not what makes them ground-breaking – rather, it’s how they’re trying to fight the disease that sets them apart. They’re building a new approach from the ground-up.

“We’re creating a cerebral palsy hand rehabilitation device,” said UConn Senior Katie Bradley, “we have four motors that are going to be on our device. Each one of them is targeting the four muscles that we’re looking at.”

“We want to improve their quality of life, alleviate their pain,” said Senior Brittany Morgan.

Bradley and Morgan, along with fellow Seniors Morgan DaSilva and Brianna Perry, said they got into Biomedical Engineering to help people, and decided to set their sights on Cerebral Palsy because it can be so debilitating.

“They’re just getting very rigid. They’re getting stuck,” said Perry,” both the muscles and the bones are starting to deteriorate.”

Bradley added: “…but if we can distract the signal from their brain that’s doing that, they can kind of get some relief from that.”

Vibrational therapy can be that distraction.

“Being able to regenerate the muscle through vibrations will help loosen up the muscles and also give the patient more control of their muscles,” said DaSilva.

“Whole body has been done but localized vibrational stimuli has not been done,” said Perry, “‘it’s definitely a new, innovative rehabilitation treatment.”

“We’re specifically targeting four muscles for a purpose and no one’s ever done that,” said Bradley

The team also partnered with the company Delsys, Inc. to use its muscle activity sensors to gauge the therapy’s results.

“Those are really effective,” said DaSilva, “we also have mini ones too because all the muscles in the hands are really small.”

This story isn’t just about what these women are doing, it’s also about who they are, and they’re proud of that.

“We’re actually one of three senior design teams that are all-girls,” said Bradley, “right now, only actually 11 percent of practicing engineers are women and we represent 50 percent of the population and so there’s clearly something standing in our way now.”

“We, as a school are lucky enough to have a pretty large female engineering population but there still is the fact that engineering… it’s a boy’s club,” said Morgan, “the STEM field is growing for the female population and I think we deserve to be there and have it grow even further.”

The biggest unanswered question is if the device works. The team said the early returns from testing are positive, but the team plans to present its full findings on April 27, during UConn’s Senior Design Demonstration Day at Gampel Pavilion in Storrs. However, the results won’t be how they define success.

“I think we’ve had success already, to be honest, in the fact that we created this novel idea, we were able to make it, and we’re just hopeful that it will improve,” said Morgan.

“I think it’s really cool. We get to say that we’ve done something that no one has ever done before,” said Bradley.