BRUNSWICK, Ga. — *Read the full complaint at the bottom of this story.

A federal lawsuit filed on one-year anniversary of Ahmaud Arbery’s death says the men who allegedly murdered him violated his civil rights.

Lee Merritt, Arbery’s family attorney, said the decision to file one year after Arbery's death is both substantive and symbolic.

“We wanted to let the [family] know that the community, their attorneys, the legal system is still going to be held accountable and that we’re still fighting for them a year later,” Merritt told First Coast News.

In the suit, Merritt claims that the police department coordinated with members of the public in the death Ahmaud Arbery.

“They unfairly and prejudicially targeted the Black man who was seen enter entering a property that many people were entering, they imputed criminality on [Arbery]. And they had the opportunity to avoid this from happening to tell citizens that it is not appropriate to engage in vigilantism,” Merritt said.

He says the suit is substantive, based on clear violations of the law by state actors and constitutional violations of Ahmaud Arbery.

All three men have pleaded not guilty to felony murder charges.

A text message released in May 2020 shows a Glynn County police officer told a property owner to contact Greg McMichael if he had problems with burglaries. That message included in the filing, along with a map of the route along which Arbery was chased before being killed.

Credit: contributed
Map included in the civil rights lawsuit filed by Ahmaud Arbery's family shows the route along which he was chased before he was killed.

The property owner has previously denied having contact with any of the McMichaels—who had made several 911 calls to police after a string of burglaries in the months leading up to the shooting.

Prosecutors say there was no evidence that Arbery stole anything when the McMichaels and Bryan chased him through the Satilla Shores neighborhood on February 23.

“What these men did, it should have been condemned immediately,” Merritt said.

Merritt also says the police department’s lack of action is an example of systemic racism.

“We went over 70 days…without any real action in this case. And it wasn’t because of a lack of evidence,” Merritt said.

Merritt says it was only when a piece of evidence—the cell phone video that shows Arbery being shot—was released and created public outcry that action was taken.

Merritt says the only remedy available in civil court is monetary damages, but they are also asking for extraordinary relief and systemic changes to address racism within Glynn County.

“The Glynn County Police Department is a troubled department, and not only because of what happened to Mr. Arbery but shortly after his murder, the chief of police left his office in handcuffs along with some of his top officials,” Merritt said.

He says the complaint will likely be set aside while the criminal case is ongoing.

“It's important for the world to know that on that date, that even as we hold the criminals accountable, there's other people that should be held civilly liable, and that there should be additional consequences,” Merritt said.

First Coast News is reaching out to defense attorneys for the men involved and the Glynn County Police Department for comment. 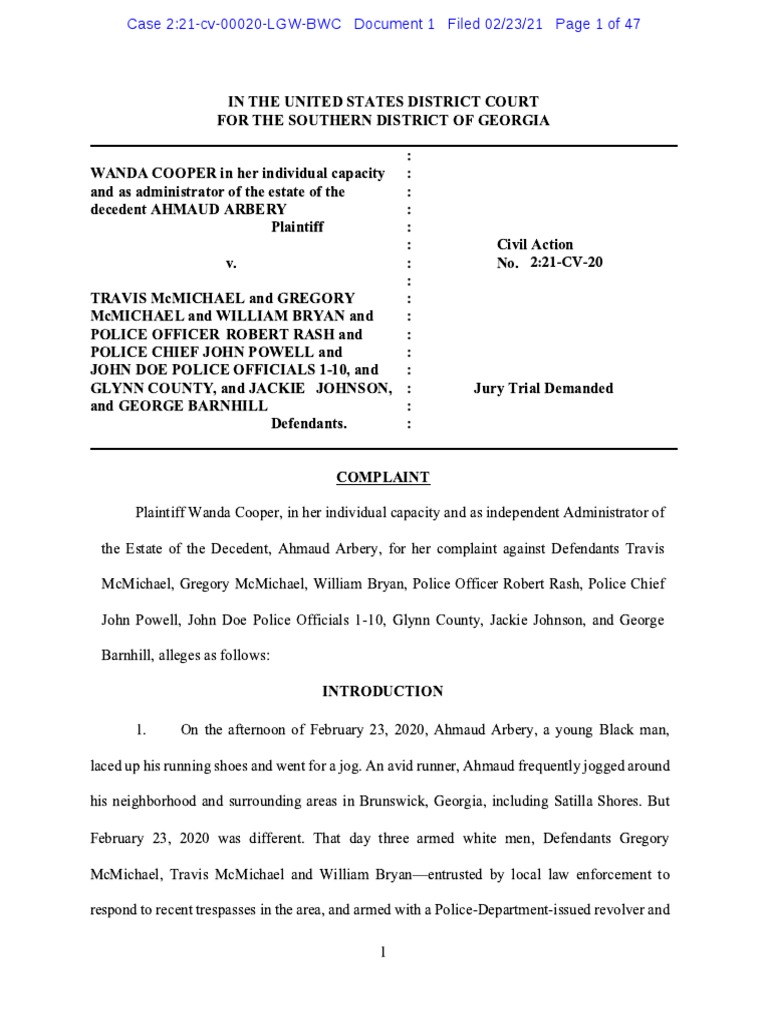 Community Renewal Team making sure seniors get meals during Nor'easter