Autopsy for Faye Swetlik completed, results to be released Tuesday

Out of respect for the family, the results of the autopsy will be released at a press conference on Tuesday 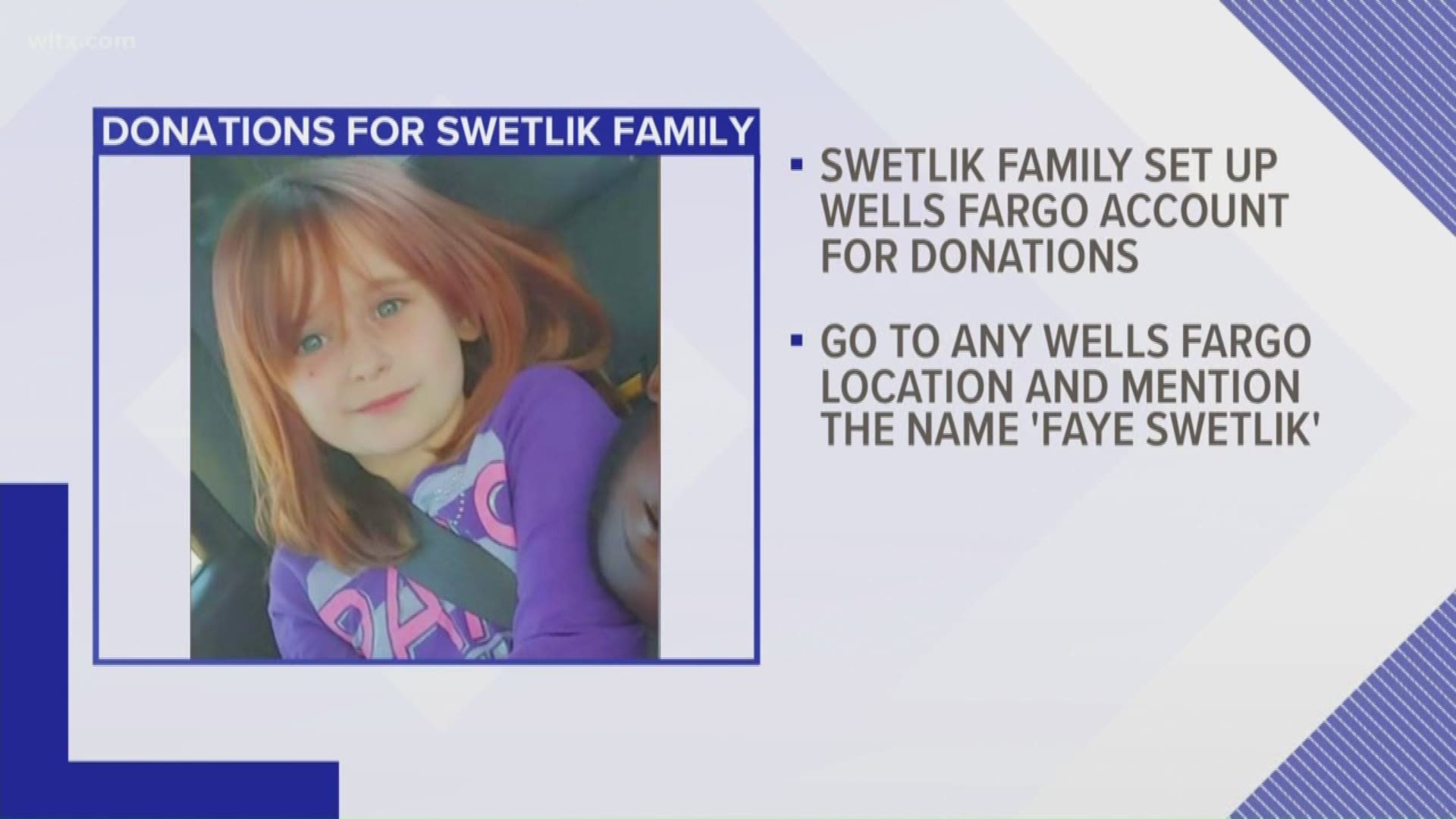 CAYCE, S.C. — The preliminary autopsy results of 6-year-old Faye Swetlik will be released during a Tuesday press conference, according to the Lexington County Coroner.

Out of respect for the family, the preliminary results are being delayed so they can have the privacy and time they need.

The findings regarding Faye’s autopsy will be released at a Tuesday press conference that will be held by Coroner Fisher and the Cayce Department of Public Safety. The location and time have not been released at this time.

The preliminary findings of the other autopsy for Coty Scott Taylor will also be released at that time.

The little girl went missing on Monday afternoon while playing in her front yard in her Cayce home in the Churchill Heights neighborhood. Three days later, the search ended when law enforcement found her body in the woods near her home.

Investigators say a man was also found in the neighborhood of Swetlik, and is linked to her death. Sgt. Evan Antley with the Cayce Department of Public Safety said Friday that the man, who the coroner identified identified as 30-year-old Coty Scott Taylor, was found dead in his home.

Officers are stressing that they believe there is no danger to the community. There have been no arrests, and they are not currently looking for a person of interest.

Their autopsies were conducted at The Medical University of South Carolina (MUSC) Saturday morning.

A police escort accompanied Swetlik as she returned to the Midlands following the autopsy.

Cayce DPS Sgt. Evan Antley said a piece of critical evidence collected from a trash can in the neighborhood led them to the girl's location, and ultimately, Taylor's home. Antley wouldn't say what that evidence was, but did say it was something that had been mentioned on her missing persons flyer.

Taylor lived less than 500 feet from the 6 year old, at 602 Picadilly Square. The wooded area behind the home is where the body of Swetlik was found.

The department is working to gather more details around the disappearance, and calling on the community to help in any way they can. Investigators say they are going through a large amount of evidence. Cayce DPS is still asking for information that can help in the investigation. The tip line to give information is (803) 205-4444.

While questions remain about her disappearance and her death, there has been an outpouring of emotion from the community. Cayce Department of Public Safety Director Byron Snellgrove, whose agency led the investigation, was visibly upset as he announced the news.

"It is with extremely heavy hearts we announce we have found the body of Faye Marie Swetlik," he said, his voice trembling as he spoke.

Two days earlier, Snellgrove talked about the kind of girl Swetlik was.

RELATED: School sends note to parents on how to talk about Faye Swetlik's death

Her family said she also liked to collect rocks, play outside, and take selfies with her family and friends.

"She's fun, bubbly, loves to color, always has a smile on her face and the prettiest blue eyes you've ever seen," said a family friend. "A smile that would melt your heart."

Within minutes of Thursday's tragic news, people were sending their condolences.