Biden introduces his climate team, including two with Connecticut ties

President-elect says 'No time to waste' on climate crisis. 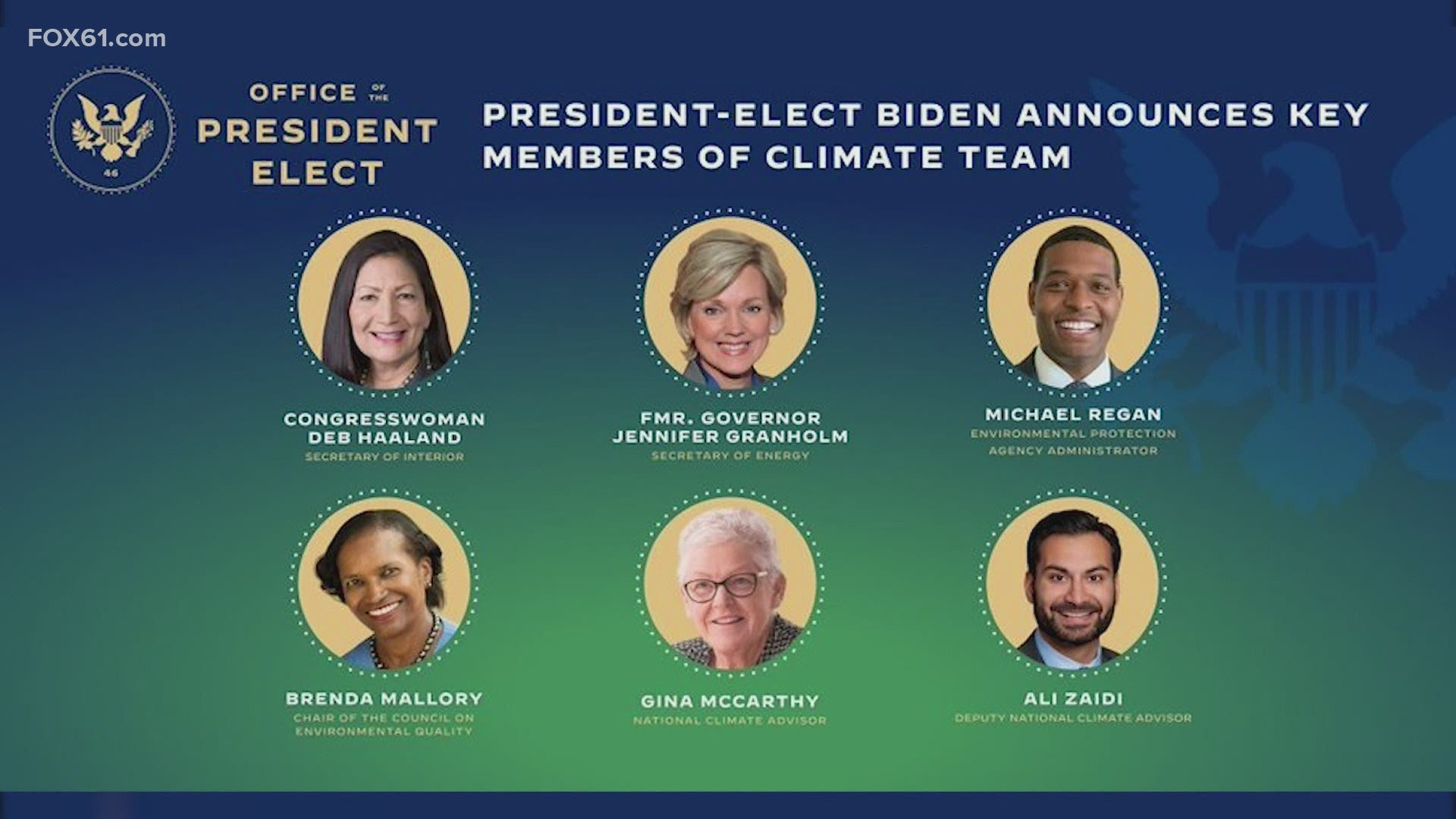 WILMINGTON, Del — Just as the United States has needed a unified, national response to COVID-19, it needs one for dealing with climate change, President-elect Joe Biden said Saturday as he rolled out key members of his environmental team.

“We literally have no time to waste,” Biden told reporters as introduced his choices.

The approach is a shift from Donald Trump’s presidency, which has been marked by efforts to boost oil and gas production while rolling back government efforts intended to safeguard the environment. The incoming Biden team will try to undo or block many of the current administration’s initiatives. There also will be an emphasis on looking out for the low-income, working-class, and minority communities hit hardest by fossil fuel pollution and climate change.

In his remarks, Biden stressed the diversity of an emerging team that he described as “brilliant, qualified, tested and they are barrier-busting.”

“Already there are more people of color in our Cabinet than any Cabinet ever, more women than ever,” said the former vice president, who has promised to assemble a group of department leaders who reflect the diversity of America.

The nominees Biden introduced Saturday had compelling personal stories that they cited as guiding them if confirmed by the Senate.

Biden’s nominee to oversee the Council on Environmental Quality is Brenda Mallory, who was born and raised in Waterbury and graduated from Yale. The office oversees environmental reviews for virtually all major infrastructure projects and advises the president on major environmental issues. If confirmed, she would be the first African American to hold the position since it was created more than half a century ago.

"I grew up in the working-class community of Waterbury, Connecticut," Mallory said at the press conference. "I know the faces of the marginalized, and I appreciate the challenges of urban pollution."

So proud to be on this team. We're ready to take on these urgent challenges! https://t.co/3FLFPmW4HJ

New Mexico Rep. Deb Haaland would be the first Native American to lead the Interior Department, which has wielded influence over the nation’s tribes for generations. She said her life has not been easy. She struggled with homelessness and relied on food stamps at one point.

“This moment is profound when we consider the fact that a former secretary of the Interior once proclaimed his goal, was to quote, ‘civilize or exterminate’ us,” Haaland said. “I’m a living testament to the failure of that horrific ideology.”

Haaland was referring to Alexander H.H. Stuart, who said that in 1851.

Former two-term Michigan Gov. Jennifer Granholm is in line to be energy secretary. She described arriving in the U.S. at age 4 and brought from Canada by a family “seeking opportunity.” She said her father found work as a bank teller and retired as head of the bank.

“It’s because of my family’s journey and my experience in fighting for hardworking Michigan families that I have become obsessed, obsessed with gaining good-paying jobs in America in a global economy,” Granholm said.

North Carolina official Michael Regan would be the first African American man to run the Environmental Protection Agency. Regan, the state environmental head since 2017, has made a name for himself by pursuing cleanups of industrial toxins and helping the low-income and minority communities significantly affected by pollution.

Regan said he grew up in North Carolina hunting and fishing with his father and grandfather and that he has great respect for the outdoors and the country’s natural resources, but he also had a respiratory condition that required him to use an inhaler.

“Since the start of my career, my goals have been the same,” Regan said. “To safeguard our natural resources, to improve the quality of our air and water, to protect our families and our communities, and to help them see the opportunities of a cleaner, healthier world.”

Two other members of the team introduced Saturday do not need Senate confirmation. They are Gina McCarthy, to serve as national climate adviser, and Ali Zaidi, to serve as her deputy. McCarthy was EPA administrator from 2013 to 2017 during President Barack Obama’s second term. Prior to that, she was Connecticut's Environmental Protection Commissioner.