Coming up on June 7 and 8, there are several marches planned for racial justice in Chesapeake, Norfolk, Portsmouth and Gloucester County. Here's just a few of them. 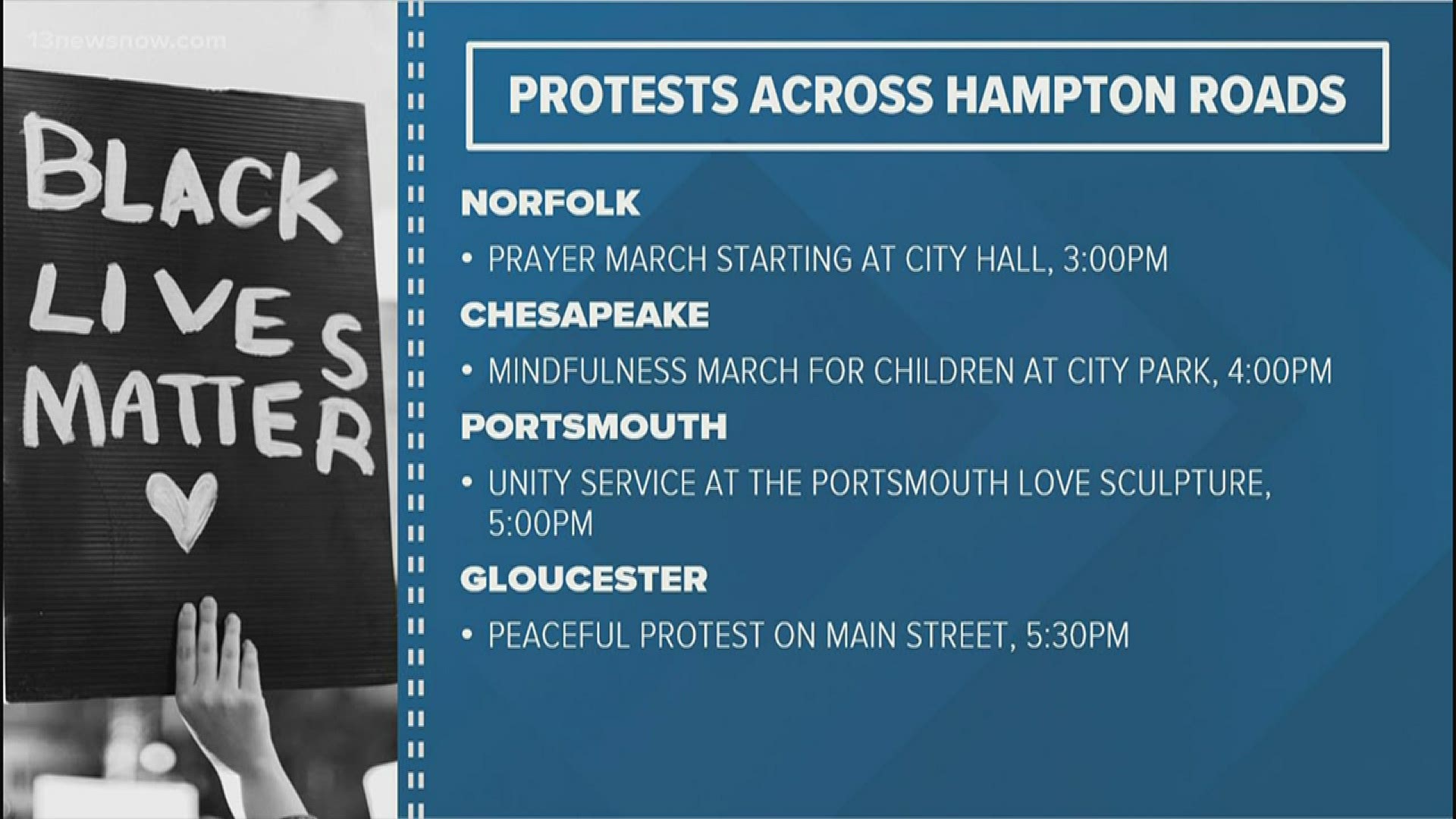 CHESAPEAKE, Va. — Author's note: the above photo and video are from other protests in Hampton Roads that have going on since late March.

Marches for racial justice have been popping up everywhere in Hampton Roads since George Floyd was killed in police custody on May 25.

Coming up on June 7 and 8, there are several marches planned for racial justice in Chesapeake and Norfolk. In all cases, protesters are asked to wear face masks to help prevent the spread of COVID-19.

Sunday, in Chesapeake City Park, there will be a Mindfulness March for Children from 4 p.m. to 6 p.m.

On the event's Facebook event page, organizers wrote that they wanted to create a safe space for children to experience history in real-time.

"This event is TARGETED toward our children and is aimed at creating a space for them to be mindful of the present moment," the spokesperson wrote. "The children will have an opportunity to protest injustice and racial inequality while honoring the black lives that have been lost due to police brutality."

The Facebook event asked participants to wear masks and black clothing, and bring signs that portray a positive message about the future.

Children younger than 16 will need parental supervision to participate.

The Chesapeake Coalition of Black Pastors is also hosting a march in Chesapeake - this one on June 8 at 5 p.m.

Demonstrators plan to leave from The Mount Church at 215 Las Gaviotas Boulevard and march to City Hall.

Participants are asked to arrive early if they would like to march.

City Collective is organizing a prayer march in Norfolk on June 7, from Norfolk City Hall to Town Point Park.

The event is slated to start at 3 p.m. Sunday.

"We are calling on faith communities in Hampton Roads to stand united, seek justice, and love mercy," wrote organizers, likely in reference to the Bible verse Micah 6:8. "We desire to celebrate a diverse expression of God’s image in humanity that affirms the dignity, value, and worth of every person."

For this march, participants are asked to register ahead of time. You can find that link here.

The City of Portsmouth is inviting people to gather at the Portsmouth Love Sculpture that overlooks the water on Crawford Parkway on June 7 for a unity service.

A release about the event said the 5 p.m. demonstration would be about "prayer, unity and comfort."

"Ministers and pastors from a variety of denominations within the faith-based community will be present to participate in this special event," wrote a spokesperson.

Participants should bring their own lawn chairs, and sit at least six feet apart from non-family-members.

Gloucester County is inviting people to walk down Main Street on Sunday, and participate in an 8 minute 37 second moment of silence followed by prayer with black community leaders.

The event is scheduled to start in the courthouse parking lot at 5:30 p.m.

"Please join us in a peaceful protest to help unite our community with the beautiful idea of justice and peace," wrote an organizer.