It’s been a rather mild winter according to residents and reportedly it’s been the 10th warmest winter on record thus far, but with temperatures are dropping 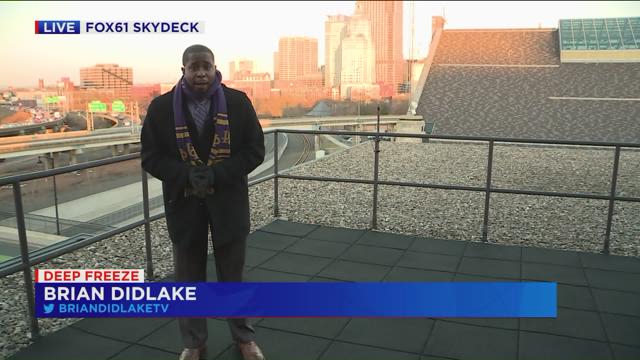 HARTFORD, Conn. — The state enacted its severe cold weather protocol after temperatures are reported to drop well below freezing.

People FOX61 spoke to say this cold snap was something they weren’t prepared for.

Benjamin Mack said, “It’s too cold, way too cold.” Benjamin was followed soon after by Mary-Beth Voelker who said, “It went from some very nice temperatures to very, very frigid, but again it’s all what you make of it.”

It’s been a rather mild winter according to residents and reportedly it’s been the 10th warmest winter on record thus far, but with temperatures dropping to well below freezing many say it’s time to bring out the heavier coats and turn up the heat.

Patrick Stevens said, “Tonight, I got the heat on a little more than usual, but I’m actually kind of used to it, when you live in New England you are used to the cold weather.”

RELATED: Bitterly cold tonight into the start of the weekend

The city of Bristol enacted its cold-weather protocols, so everyone has a way to stay warm.

The freezing weather is why Brian’s Angels and other shelters in the area opened their doors to be a safe haven from the bitter cold especially for those without means to keep themselves warm.

Pat Stebbins, who is over the warming center, said, “It’s pretty cold, people usually come in looking for a hot coffee, a sandwich and a spot to sit down and warm up. I just know we are taking care of people and making their lives a little bit better.”

Brad McCall is one of the residents who utilize the services of Brian’s Angels and says he’ll brave the cold.

McCall said, “I’ll probably camp in this, I don’t mind it. I’m a little different person. I like my freedom; I like you know— I like it outside. It’s going to be rough, but I know how to get warm.”

The state’s severe cold weather protocol will be active until noon Saturday.