If it were to pass, adults would be able to possess 1 oz., or 5 oz. in a locked container in their residence or glove box or trunk of their car, on July 1 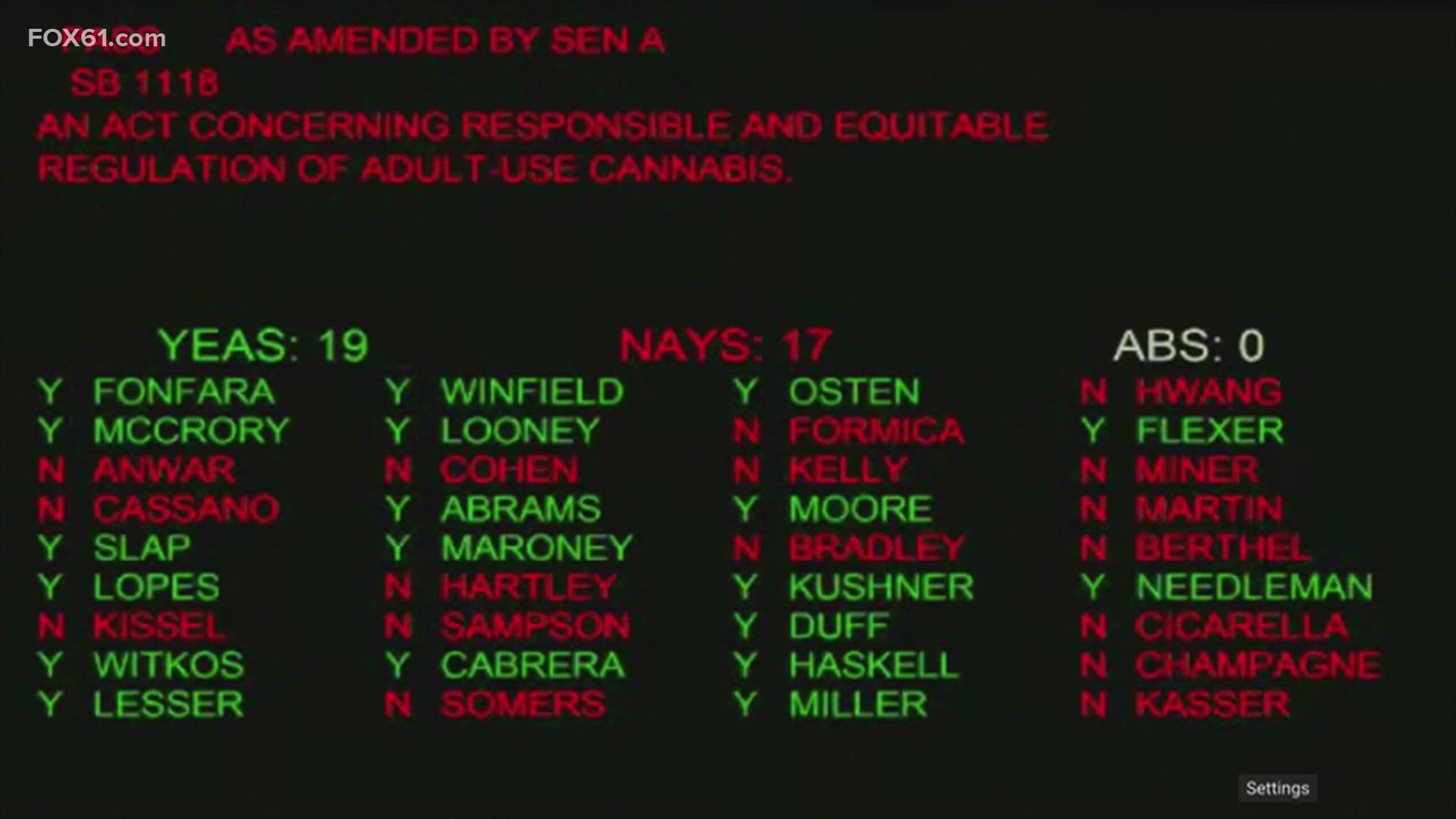 HARTFORD, Conn. — The Connecticut State Senate passed a bill that will legalize marijuana for residents, beginning next month.

It's now heading to the State House.

The nearly 300-page final bill headed to the general assembly this week, just days before the end of the legislative session.

If it were to pass, adults would be able to possess 1 oz. of cannabis, or 5 oz. in a locked container in their residence or glove box or trunk of their car, on July 1st of this year.

People would be allowed to grow their own marijuana plants beginning in July of 2023 and retail sales would be expected to begin next year.

The bill would also establish a social equity commission, whose goal would be to encourage communities disproportionately affected by the prohibition of marijuana, to participate in the cannabis industry.

“I applaud the Senate’s passage of the bill to legalize the adult use of cannabis,” Governor Lamont said. “The war on cannabis, which was at its core a war on people in Black and Brown communities, not only caused injustices and increased disparities in our state, it did little to protect public health and safety. That’s why I introduced a bill and worked hard with our partners in the legislature to create a comprehensive framework for a securely regulated market that prioritizes public health, public safety, social justice, and equity. It will help eliminate the dangerous, unregulated market and support a new growing sector of our economy, which will lead to jobs and growth. This measure is comprehensive, protects our children and the most vulnerable in our communities, and will be viewed as a national model for regulating the adult-use cannabis marketplace. I look forward to the Connecticut House of Representatives securing passage of this measure and sending it my desk.”

"The goal in the legislation is to have adult-use sale by May 2022. Which is a very ambitious timeline for sure," said House Majority Leader Jason Rojas.

Republicans opposed to the bill say they do have concerns about it.

"We always talked about not leading with revenue, but this bill is all about revenue. And not about the policy of marijuana and the public health implications. I think it's going to be a difficult bill for either chamber to swallow," said House Republican Leader Vincent Candelora.

However, many people in the state are in favor of legalizing marijuana.

"I was kind of surprised when I first moved to Connecticut that it wasn't legal here, considering that it's a blue state. And that New York, and Mass, and everything around is legalized," said Gaurav Pathak of West Hartford.

"Every state around us has it. Everyone can get it if they want. Legalize it," said Joseph Pelletier of East Hartford.

With the governor's team part of the negotiations, lawmakers also in favor of the bill are optimistic.

"A lot of tension and a lot of emotion went into this legislation this year, I think overall people are going to see an adult-use cannabis bill that is perhaps the best in the country," said Rojas.

In addition to the long and complex marijuana bill, legislators also must pass a state budget this week.

This is the nearly 300 page proposed bill.