“There is nothing obvious which would stand in her way of being confirmed,” said Richard Kay, a UConn law professor specializing in Constitutional law. 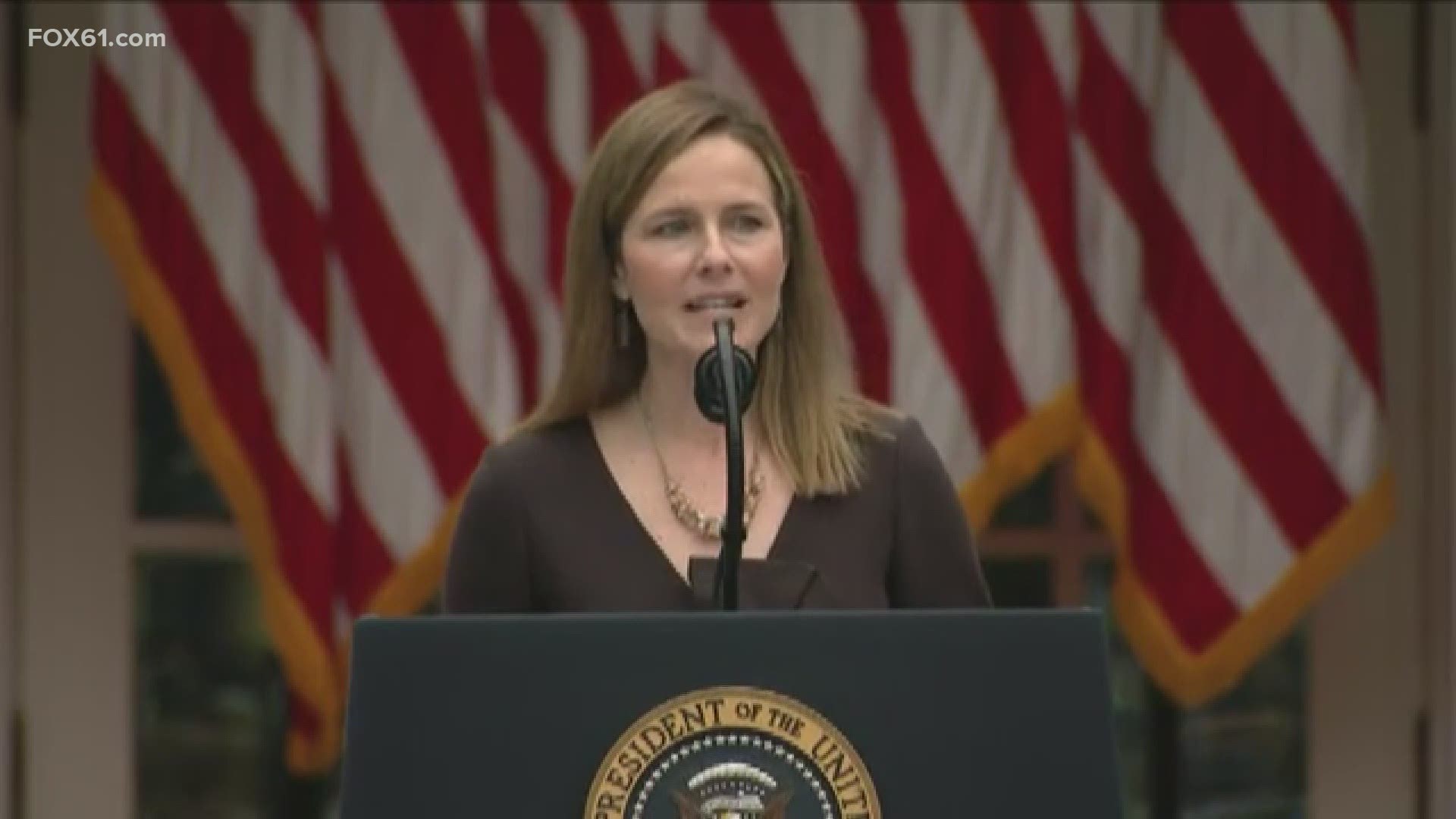 HARTFORD, Conn. — Local officials are reacting after President Donald Trump announced his nominee for a seat at the Supreme Court, Amy Coney Barrett.

This nomination comes after the death of late Justice Ruth Bader Ginsburg.

“There is nothing obvious which would stand in her way of being confirmed,” said Richard Kay, a UConn law professor specializing in Constitutional law.

Kay says when it comes to the hearings soon to be set for supreme court justice nominee, it’ll be much like what America has already seen before with previous President Trump nominees.

Friendly questioning from Republicans; then a sharp turn to major criticism from Democrats.

Kay says, “I’ve yet to hear… I neither know nor have heard about anyone that has known her personally who doesn’t think she is great.”

President Trump said, “If confirmed, Justice Barrett will make history as the first mother school-aged children ever to serve on the U.S. Supreme Court.”

In accepting the nomination, Barrett vowed to uphold the law, no matter what.

“A judge must apply the law as written. Judges are not policymakers and they must be resolute, setting aside any policy views they might have," Barrett said.

Connecticut's senators reacted to the news moments after the president's announcement.

Senator Richard Blumenthal, a member of the Judiciary Committee which will hold hearings on Barrett's nomination, said he will refuse to meet with the nominee.

“I will oppose the confirmation of Judge Amy Coney Barrett, as I would any nominee proposed as part of this illegitimate sham process, barely one month before an election as Americans are already casting their votes. The American people deserve a voice in this hugely consequential decision.”

“Judge Barrett’s views would harm real lives – real people – in real ways, from children with pre-existing conditions to women who just want to be able to decide when and how to have a family. I’m fighting for them.”

“Judge Barrett, like any Trump nominee, has already been vetted and screened to meet two tests: a commitment to striking down the Affordable Care Act and to overturning Roe v. Wade. Judge Barrett has criticized past decisions protecting access to healthcare, shown hostility to reproductive freedoms, and expressed a willingness to overturn settled Supreme Court precedent that does not align with her extreme views. If Judge Barrett’s views become law, hundreds of millions of Americans living with pre-existing conditions would lose access to their health care. In the middle of a global pandemic that has claimed more than two hundred thousand American lives, rushing confirmation of an extreme jurist who will decimate healthcare is unconscionable.”

“I refuse to treat this process as legitimate and will not meet with Judge Barrett.”

“If Trump puts Amy Coney Barrett, his hand-picked nominee, on the court, millions of people I represent in Connecticut will be kicked off their health care plans, in the middle of a global pandemic. This is the catastrophe that will be coming if Coney Barrett, who is being chosen specifically because she will vote to invalidate the entire Affordable Care Act, is confirmed. The Republicans have been on a decades-long crusade to dismantle the Affordable Care Act—sending us back to the days when insurance companies could deny you coverage for having a pre-existing condition. Now, a case is pending that will take away health care for millions, and Senate Republicans are predictably reneging on their pledge from four years ago of not appointing a Supreme Court justice during an election year, in order to rush Coney Barrett onto the court in time to end health care for millions,”

Many critics question the legality of this nominee pick due to it being so close to an election.

“It’s no legal issue, it’s more so political and what role popular politics in the selection of the Supreme Court Justice,” said Kay.

Other organizations announced their reactions, including Planned Parenthood Votes! Connecticut, which opposes the nomination.

“Tonight, President Trump defied the dying wish of Justice Ruth Bader Ginsburg and nominated Amy Coney Barrett to fill the vacancy on the U.S. Supreme Court just 38 days before Election Day.... Let’s be clear: there should be no nomination before the inauguration.

Our country faces a global pandemic that has killed more than 200,000 people in the U.S. and continues to reckon with a long, violent history of systemic racism and white supremacy. President Trump’s determination to push through a Supreme Court nominee during these national crises is a threat to our health and our rights and a disgrace to our democracy. The selection of Amy Coney Barrett — a jurist with a record of hostility toward reproductive health and rights — is a particular insult to Justice Ginsburg’s legacy and her lifelong fight for equity under the law....

The people must have a say in this election to decide who will join the highest court in the land. We will rise up and fight alongside our partners to stop any Supreme Court confirmation before the 2021 inauguration,” said Amanda Skinner, President and CEO, Planned Parenthood Votes Connecticut.

Professor Kay says although he understands the concerns about cases concerning abortion, Barrett has already addressed the issue.

“When asked about this when she was being concerned for the 7th circuit seat she was emphatic that her personal views on actions on cases, this case abortion would not influence her decisions,” said Kay.

FOX61 did reach out to the Connecticut Republican Party for comment, but have not heard back at this time.

The president has called for a “respectful and dignified” hearing from the other side of the aisle and hopes that the process will be swift, but only time will tell.