“The Connecticut National Guard is committed to the protection of life, property, and the Constitutional right to peaceful protest." 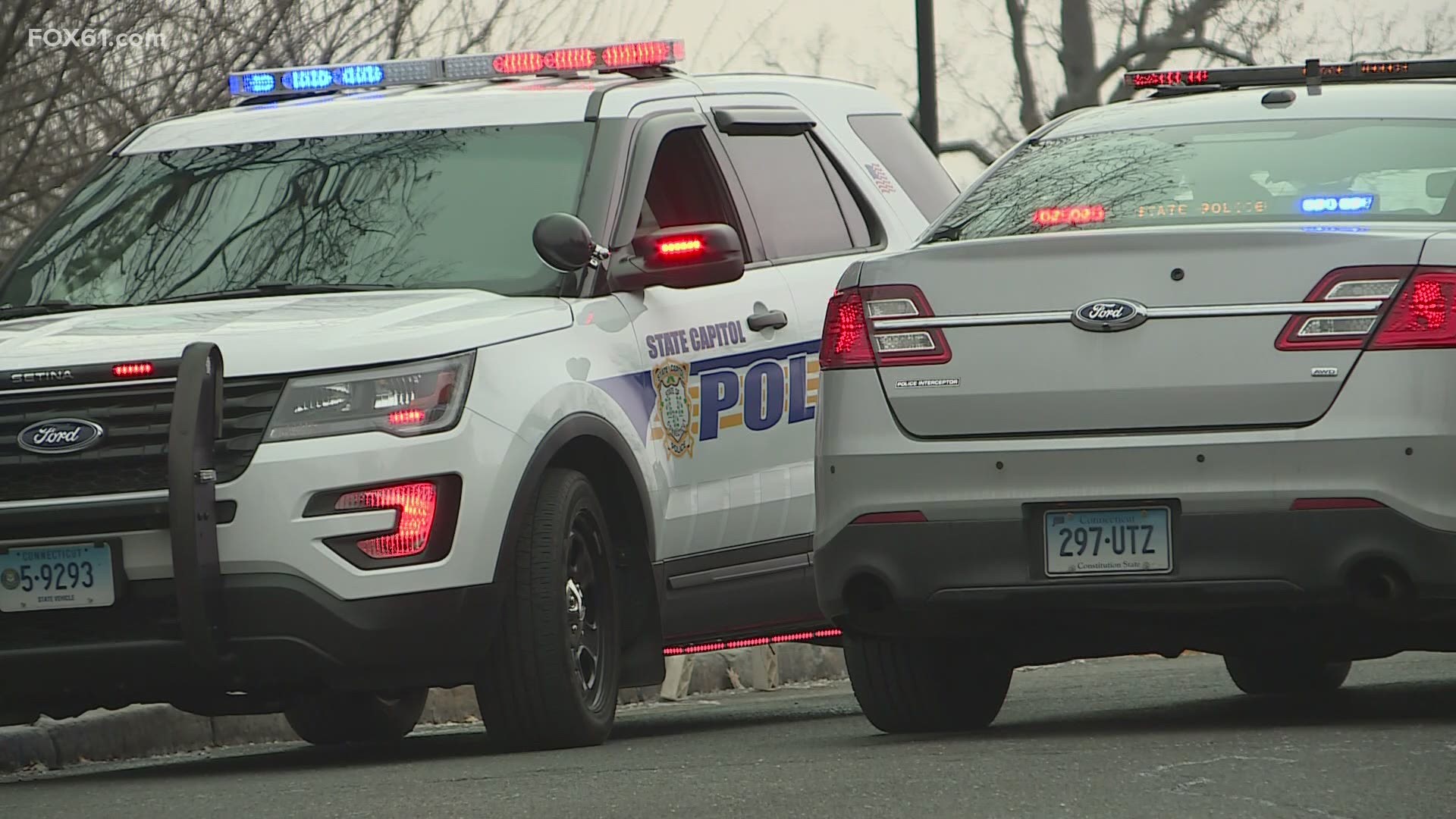 HARTFORD, Conn — The Connecticut National Guard announced they will be supporting state and local law enforcement agencies in the wake of the riots at the U.S Capitol last week and continuing threats that have been made.

The Guard said in a press release they were requested to provide additional security in the form of critical infrastructure protection.

They added, “The Connecticut National Guard is committed to the protection of life, property, and the Constitutional right to peaceful protest. Due to operational security considerations, further details such as numbers, locations, unit designations, and operational details will not be provided.”

Federal law enforcement officials are warning that domestic extremists are likely more emboldened to carry out attacks on President-elect Joe Biden's upcoming inauguration and throughout 2021 after seeing the success of last week's siege on the US Capitol.

CNN has learned that federal law enforcement agencies, in a series of bulletins and calls with local partners this week, have issued an urgent call for assistance in securing the nation's capital as the inauguration nears, and painted a dire picture of potential threats leading up to January 20.

State officials around the country are also ramping up security. In Oklahoma, House members were told not to come to the state capitol this weekend due to concerns about possible protests. Fencing has been erected around the Arizona state capitol "out of an abundance of caution" and Oregon State Police will be assisted by the National Guard as they deal with possible demonstrations.

Those concerns are bolstered by new warnings from federal officials that last Wednesday's attack on the US Capitol by supporters of President Donald Trump will likely motivate additional follow-on attacks by extremists throughout 2021, according to an intelligence bulletin dated Wednesday and obtained by CNN.

Warning that the people who attacked the Capitol largely viewed their efforts as a success, the FBI, Department of Homeland Security and Office of the Director of National Intelligence said the attack "very likely will serve as a significant driver of violence" for a diverse set of domestic extremists, according to the bulletin.

The joint US government intelligence bulletin was first reported by The New York Times.

"The violent breach of the US Capitol Building is very likely part of an ongoing trend in which (extremists) exploit lawful protests, rallies, and demonstrations, and other gatherings to carry out ideologically-motivated violence and criminal activity," the intelligence bulletin warned.

The range of potential future targets of attack was varied, with intelligence officials warning in the bulletin that extremists could zero-in on government officials and institutions, as well as racial and religious minorities, journalists and members of the LGBTQ+ community.

The bulletin also indicated that the January 6 attack may have served as a venue for extremists of differing ideological motivations to foster connections.

In addition to the perceived success of the January 6 Capitol attack, intelligence officials warned that the response by law enforcement could also motivate extremists to respond with violence, including at Biden's upcoming inauguration.

"Since the (Capitol attack), violent online rhetoric regarding the (inauguration) has increased, with some calling for unspecified 'justice' " for a rioter shot by police inside the Capitol, the bulletin said.

Other motivations for possible future attacks included anti-government views held by extremists, as well as grievances associated with the false narrative that the 2020 presidential election was stolen.

"The increasing prevalence and influence of conspiracy theories based on a belief in the existence of global or 'deep state' actors who work to manipulate various social, political, and/or economic conditions of the United States very likely serves as a driver of some (extremist) violence," the report said.

The conspiracy theory-laden language observed by US intelligence officials has often mirrored baseless claims made by Trump. Throughout his presidency, Trump has claimed without evidence that a nefarious group of "deep state" actors have been secretly working to undermine his presidency, and he has continually spread disinformation about the integrity of the 2020 election.

Feds working with police around the country

As law enforcement prepares to respond to upcoming protests before and during the inauguration, FBI Director Chris Wray and Senior Official Performing the Duties of the Deputy Secretary of Homeland Security Ken Cuccinelli held a call Wednesday with law enforcement leaders from around the country to provide a briefing on the nationwide threat picture relating to planned protests, according to a person briefed on the call.

The source said the FBI briefed their law enforcement partners on intelligence reporting indicating protesters planned to conduct "peaceful, armed demonstrations" in Washington, DC, and at state capitols around the US on January 17 to protest the results of the 2020 election.

An FBI spokesperson confirmed the call, but did not provide additional details.

As CNN previously reported, an internal FBI bulletin disseminated to law enforcement warned that "armed protests" were being planned at all 50 state capitols and the US Capitol in Washington in the days leading up to the inauguration.

The FBI indicated federal law enforcement is currently working to identify any suspected extremists who may pose a threat at the planned armed demonstrations.

On the call, FBI officials said they remain concerned about the prospect of extremists appearing at planned rallies and conducting violence, and that violent domestic extremists continue to pose the most significant threat to Biden's inauguration, according to another source familiar with the call.

"The chatter is off the charts right now," one official told CNN on Tuesday regarding extremists talking online about future actions.

Federal officials stressed on the call with state, local, tribal and college campus law enforcement leaders that the FBI will not tolerate extremists using the First Amendment as a guide to incite violence, adding that they expect threats will continue past Biden's inauguration, the source said.

In addition to the potential threats at government buildings, officials discussed seeing an increased number of threats to private companies and their executives in recent days.

According to the source, federal officials said on the call that Russian actors have been amplifying the false narrative that members of Antifa infiltrated Trump supporters during the riot at the US Capitol, and the Chinese have seized on news stories showing chaos in the US.

Another government report is shedding light on how law enforcement officials are monitoring the threat of potential violence in the coming days.

According to an internal US Secret Service report dated January 11 and obtained by CNN, analysts with the Secret Service's team responsible for monitoring websites and social media for planned demonstrations note that protesters unhappy with the 2020 election results are using online platforms to organize events in the Washington area and around the country.

In one online forum observed by investigators, the report indicated that a group calling itself "American Patriots Nationwide" is organizing a violent demonstration in Washington beginning on January 16. On its website, the group indicated it plans to use its members to surround the Capitol, White House and Supreme Court, and only allow the entry of people designated by Trump.

The Secret Service report said the American Patriots Nationwide group also planned to detain Democratic politicians who "played a role in planning or executing or supporting the attempted coup of the United States of America from 2016 to 2020."

The Secret Service bulletin did not offer an assessment on the realistic nature of the planned rallies nor how much confidence investigators have in the ability of organizers to achieve their stated objectives.

According to the report, groups associated with the Boogaloo movement planned to host an armed march from the Washington Monument to the White House, and encouraged its members to bring weapons.

Other separate events noted in the Secret Service report similarly encouraged protest attendees to come armed, although organizers did not explicitly encourage violence.

The District of Columbia has some of the strictest gun laws in the country and the open carrying of firearms is prohibited.

For Inauguration Day, the Secret Service report indicated that analysts identified more than 35 rallies being planned online around Washington.

One event dubbed the Million Militia March encouraged attendees to bring weapons. "The group claims they will not attack, but will defend," the Secret Service report noted.

As part of its protective mission, the Secret Service routinely reviews so-called "open source intelligence" to review planned rallies and protests staged near official events. The Secret Service report obtained by CNN indicated that recent efforts by social media companies to suspend users engaged in election-related disinformation has, in effect, hindered the ability of analysts to identify some details of planned inauguration protests.

Not all of the planned demonstrations listed in the Secret Service report were pro-Trump.

According to analysts, one group is planning a rally called "Smoking to Trump's Sorrow," in which attendees will join to together to smoke marijuana and celebrate the end of Trump's presidency.

Another planned DC event, dubbed the "Lesbian U-Haul Trump Out Parade" is being organized to help move Trump out of the White House, although the Secret Service did not indicate what logistics the group planned to employ to accomplish its stated goal.