From the site where a white Brooklyn Center officer shot and killed a Black man during a traffic stop, residents outlined changes they'd like to see the city enact. 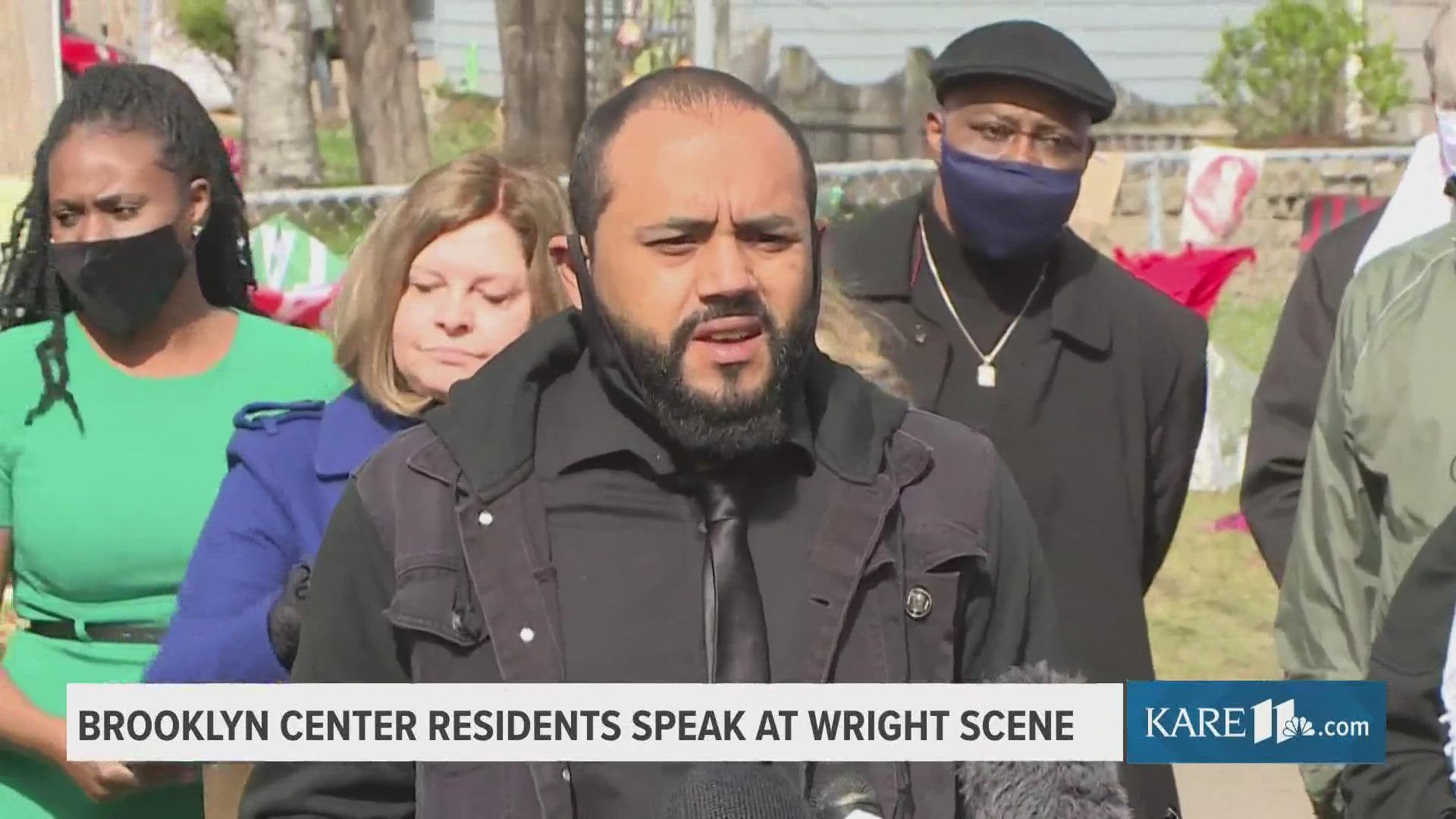 BROOKLYN CENTER, Minn. — Members of the Brooklyn Center community are calling for police reform and changes to the structure of city government after the fatal shooting of Daunte Wright at the hands of police.

Mayor Mike Elliott and Rep. Ilhan Omar stood in solidarity with a group of residents who organized a press conference Tuesday at the site where former Brooklyn Center officer Kim Potter shot and killed Wright during an April 11 traffic stop.

Branch, who's a Minneapolis educator and youth outreach worker, specifically recommended a committee of civilians to oversee the Brooklyn Center Police Department. He acknowledged an existing proposal for a review board that includes active-duty officers, calling it unacceptable.

Branch also demanded a "transparent and easily accessible process for filing police complaints," as well as implementing an education and distribution process in tangent.

"If you don't know about a process, it does nobody any good," he said.

Resident Protea Toles acknowledged the work the community has done to set up donation sites and direct resources to those in need.

She expressed a "long-standing concern" that the city manager isn't an elected position, and that whoever holds it isn't required to live in Brooklyn Center.

Toles called for the city manager to be a full-time position, and to include a staff person for the mayor. She also called for City Council members to be full-time roles.

"Making these changes to our local government will help to better reflect and magnify the voices of the citizens," she said. "Our elected officials need the resources to be able to implement the changes we need on a full-time basis. This will allow them to dedicate their time and attention to our city and the needs that we have as we work on a path forward from this tragedy."

RELATED: 'It's just been nonstop': Outpouring of donations for Brooklyn Center community

Cooper called for more transparency in tracking arrests, and changes to use-of-force training.

"The City of Brooklyn Center on its website should publish the arrests by race," he said. "Are we arresting three Blacks for every white? Are we making traffic stops? That data should be there and if it's out of whack, there should be an accounting, and that accounting would let us look at, how come?"

Cooper also said that police use-of-force training only prioritizes the "feeling of safety for the officer," rather than the individual who's stopped or under arrest.

Rep. Ilhan Omar, who represents the congressional district spanning all of Minneapolis and several neighboring cities, attended the briefing Tuesday to uplift and center the voices of Brooklyn Center residents.

"Our community here in Brooklyn Center, and my district and our state and our country, is asking for us to take a leap of faith to say: The current policing system that we have is not doing anything to protect and serve," Omar said. "And so what will it take for us to have a system where we are all protected by? And what does it take for us to have the resources in our communities that would essentially provide the safety that we all need?"