Difference between the Delta plus variant and Delta variant

According to reports, the variant mutated from the highly transmissible Delta variant. There are still many unknowns regarding this mutation. 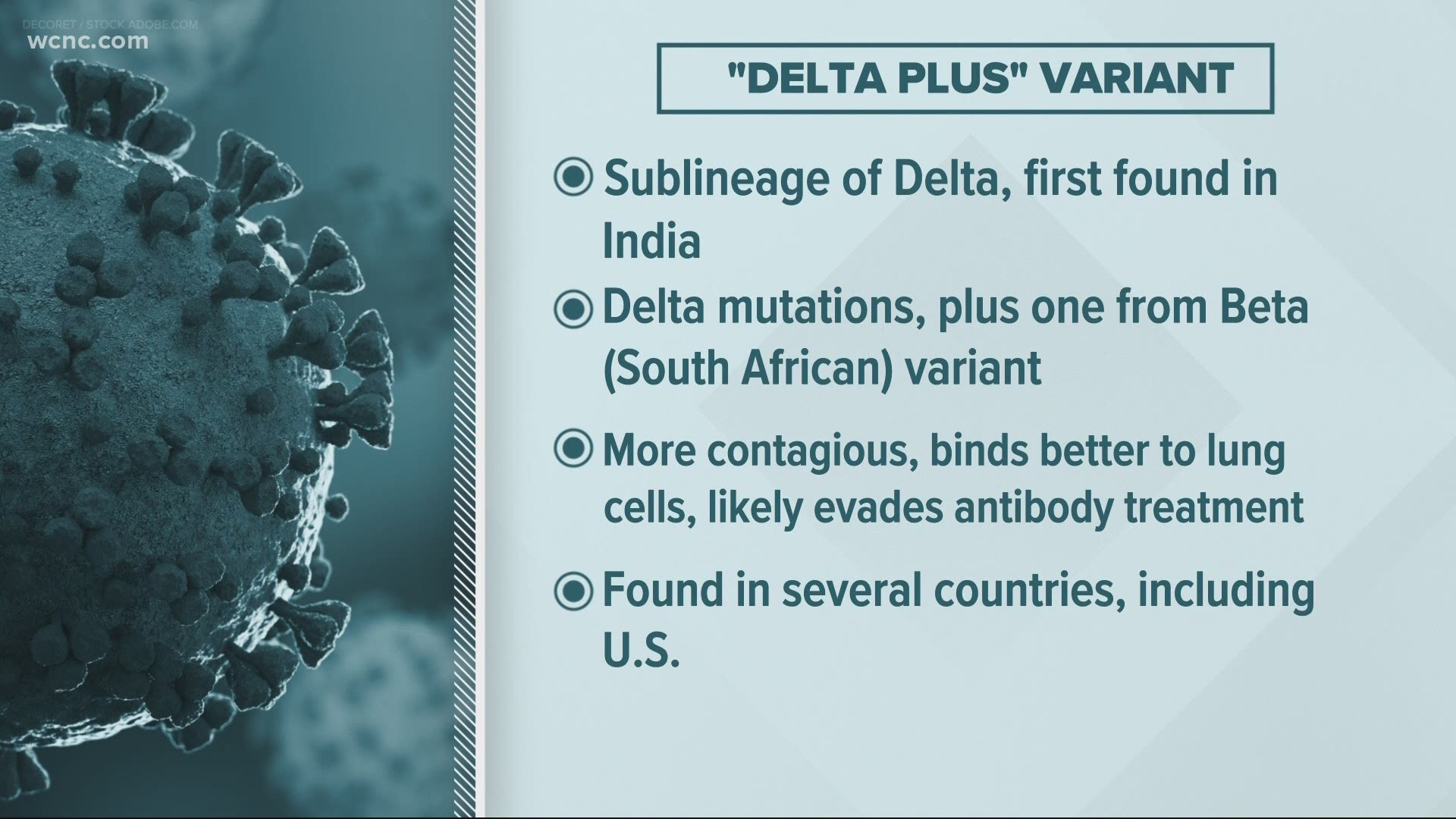 CONNECTICUT, USA — Health officials have raised concern over yet another new variant of COVID-19, called "Delta plus," a mutation from the highly transmissible Delta variant.

The Delta variant was first discovered in India and was responsible for the second wave of COVID-19 that swept through the country killing thousands. Connecticut has reported 35 cases of the variant as of June 23.

A variant is created when the virus replicates and makes a copy that has some sort of change to its DNA structure. In the Delta variant's case, it has become more transmissible. Yale School of Public Health Department Chair and Professor of Epidemiology for Microbial Diseases, and of Medicine Infectious Diseases Dr. Albert Ko explained what this means.

"Transmissibility is a characteristic or a feature of a virus or pathogen, where it captures the ability to pass through one person to another. The major mode of transmission is what we call respiratory droplets," said Dr. Ko. "There are features of the virus that these variants have that allow it to make it more easily transmissible, that could be the survival of the droplet or that could be the ability to infect cells once it gets into the respiratory passages of the person who is being infected."

In simple terms: if one person infected with say a "normal" strain of a virus interacted with 100 people, it's possible only two or three people would be infected. Someone with a more transmissible virus and interacts with 100 people could infect four or six people.

The Delta plus variant goes a step further as Dr. Ko explained.

"The Delta variant has several mutations we're concerned about, confers the ability of the virus to be more transmissible," said Dr. Ko. "The delta plus has one more, in the protein that is doing all the action. It's what we call the spike protein."

This spike protein is called K417N and has caused concern health officials like Dr. Ko. This kind of protein has been seen in the Beta variant that was first discovered in South Africa.

📍FAQs on Delta and Delta Plus Variants

✅What is the Delta Plus variant of Novel Coronavirus❓❓

This protein attaches to a cell's receptors which is a key part of entering cells. These receptors are also what scientists targeted for the vaccine to work.

"The other reason why we are really concerned about this protein is that is the target when you vaccinate somebody, that's the target protein that our immune response recognizes in order to protect people from infection," said Dr. Ko. "The Delta plus has a mutation on that protein, which may also be involved in transmissibility and also the ability to potentially escape the immune system -immunity that created when one is infected or vaccinated."

So in theory the Delta plus variant could be just as transmissible as the Delta but also could make the virus more likely to escape the vaccine or other natural immune responses.

However, there is not enough data to determine anything at this point.

Other news outlets have reported it is still unclear if Delta plus will be more dangerous than the Delta variant.

"We don't know if whether that (spike protein mutation) or the other mutations that are on the Delta plus variant that are going to really change its properties and how it does," said Dr. Ko. "The fact that it is spreading quickly gives us a head up. Bottom line: we have seen geographical spread in recent weeks of this (Delta plus variant) that sets off warning bells."

The longer a virus transmits itself from one host to another, the more it has time to replicate and create variants. USA Today reports the Delta plus variant has only been found in India at the time of this writing.

Vaccines seem to be the only way to battle the COVID-19 virus, not only simply to prevent death but to also prevent more harmful variants.

"We want to get good strong vaccination in the control of transmissions so we reduce the risk of variants in the future," said Dr. Ko. "CT has done a great job in getting the elderly vaccinated. We have done a pretty good job getting large swaths of our pop vaccinated."