It's not all bad news. While the rate of all violent crime ticked up nationally from 2019 to 2020, that number decreased in Connecticut. 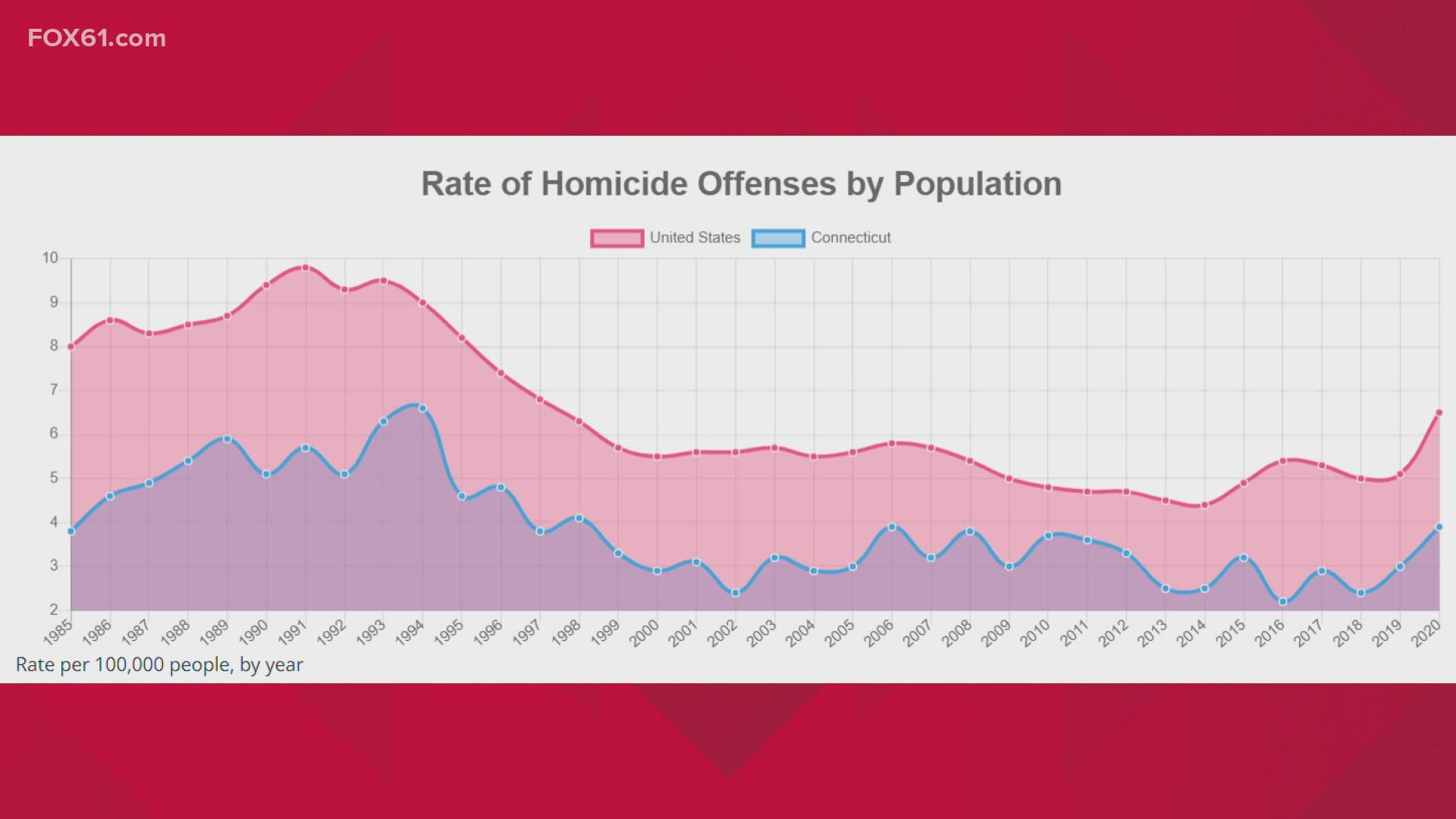 CONNECTICUT, USA — New data from the FBI shows an increase in homicides and car thefts in Connecticut from 2019 to 2020.

It's part of the yearly Uniform Crime Report, which provides data for various crimes and outlines national and state trends. The report is based on data received from law enforcement agencies.

The above graph shows the rate of homicide offenses per 100,000 people by year since 1985.

According to the graph's data, the rate of homicides rose 30% in Connecticut from 2019 to 2020, which is in line with a national increase.

Vehicle theft rates saw an even bigger increase in Connecticut from 2019 to 2020 at around 40%, with the state seeing a spike up from its lowest point recorded in 35 years. Also, in this case, that rate was up nationally.

“The auto thefts are actually dropping in our cities and rising in the suburbs," said Mike Lawlor, Associate Professor of Criminal Justice at the University of New Haven.

Lawlor said it's hard to pinpoint exactly what’s causing these increases, but they do say the pandemic could have a lot to do with both.

“A lot of it has to do with police being unable to do what was very successful in the past, this one-on-one intervention with very high-risk people. On top of that, I think there was a breakdown in trust between the community and police departments in the aftermath of George Floyd’s murder," said Lawlor.

While the rate of all violent crimes (homicide, rape, robbery, aggravated assault) by population ticked up nationally from 2019 to 2020, that number decreased a bit in Connecticut, continuing an overall downward trend that has been underway for decades.

“When we start unpacking this, that’s starting to tell us an interesting story of where we might want to go," said Stephen McGuinn, Associate Professor of Criminal Justice at Quinnipiac University.

RELATED: 'This is a crime game' | Advocacy group, state lawmakers call for special session on rise of juvenile crime

That story is still being written as researchers wait for more data to get a better understanding of the bigger picture.

“From a research perspective, I need three points in time to tell me whether or not I have a trend in a particular direction. I don’t have those three points yet,” said McGuinn.