FOX61 Exclusive: Thousands of federal employees to be furloughed; Immigration into US to slow to a halt

In a letter obtained by FOX61, the AFGE union was notified by the USCIS toward the end of May that nearly 11,000 employees would be furloughed for more than 30-days 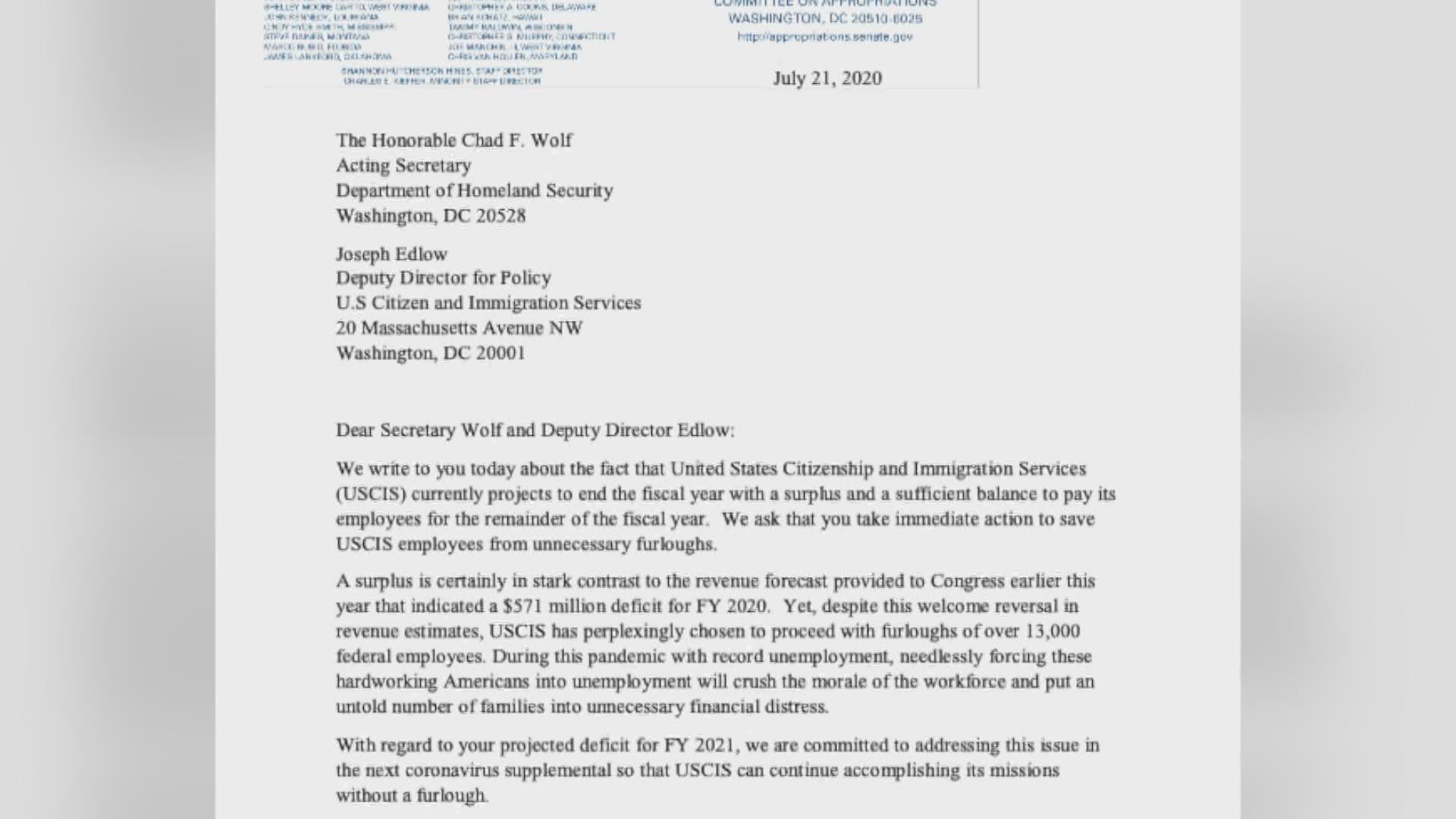 HARTFORD, Conn — After taking a major hit due to COVID-19, The Department of Homeland Security is moving forward with more than 13,000 furloughs across the country and here in Connecticut.

Now federal union members are asking for help from congress.

“We are supposed to be the bright and shining city on the hill, and our light looks a bit dim right now,” said Michael Knowles who is the local Washington DC chapter president of the American Federation of Government Employees which is a national union representing over 18,000 employees within the U.S. Citizenship and Immigration Services.

The USCIS is a fee-based organization under the Department of Homeland Security overseeing many factors of immigrants coming into the United States from interviews for green cards, conducting naturalization ceremonies, fraud, vetting, and much more.

In a letter obtained by FOX61, the AFGE union was notified by the USCIS toward the end of May that nearly 11,000 employees would be furloughed for more than 30-days causing the emotions of workers to rise.

Kevin Tinker is based in Dallas and is another local president within AFGE he shares with FOX61 the same notice to the union that says, “The USCIS will need $1.2 billion from Congress to address the budget shortfall.”

This includes 571-million for payroll and mission-critical general expenses like rent, IT-support, and more. The remaining 650-million would carry over to fiscal year 20-21 to maintain operations.

However, Tuesday the congressional House of Appropriations committee in a letter to DHS and USCIS obtained by FOX61 says the money needed to prevent these furloughs was no longer needed stating the immigration department’s estimated deficit turned into a surplus… at least for this fiscal year.

The committee writes, “You must not sit by as thousands of American jobs are on the line, particularly during a time of unprecedented unemployment.”

Tinker said, “I don’t see how they can continue, a naturalization ceremony takes anywhere from five to 10 people depending on how big it is and we got offices all around the United States if those offices are left to three or four people then I don’t see how those ceremonies can happen.”

Senator Richard Blumenthal joined a list of other Congressmen demanding a bailout for the immigration department.

Sen. Richard Blumenthal said, “It has a tremendous backlog, we need to solve the backlog that’s why I am in favor of more money but with guardrails and add requirements that the money is used to make citizens, not to deport asylum seekers or any other anti-immigrant agenda items.”

The senator says his fear is that the funding issue may be more political than financial.

“My fear is that one of the hidden agendas here on part of the Trump administration is to prevent new citizens being naturalized and having the right to vote,” said Sen. Blumenthal.

Thoughts echoed by Knowles who says these furloughs will affect more than just the federal workers.

Knowles said, “The guy who cuts your lawn does, the guy who runs your internet do, did you know that we have hundreds of thousands of men and women serving in uniform who are lawful immigrants, but they are not yet citizens, don’t you think that they’d like to get their citizenship?”

The furloughs are set to begin on August 3rd.

Union members are hoping for help in the next federal aid stimulus package.