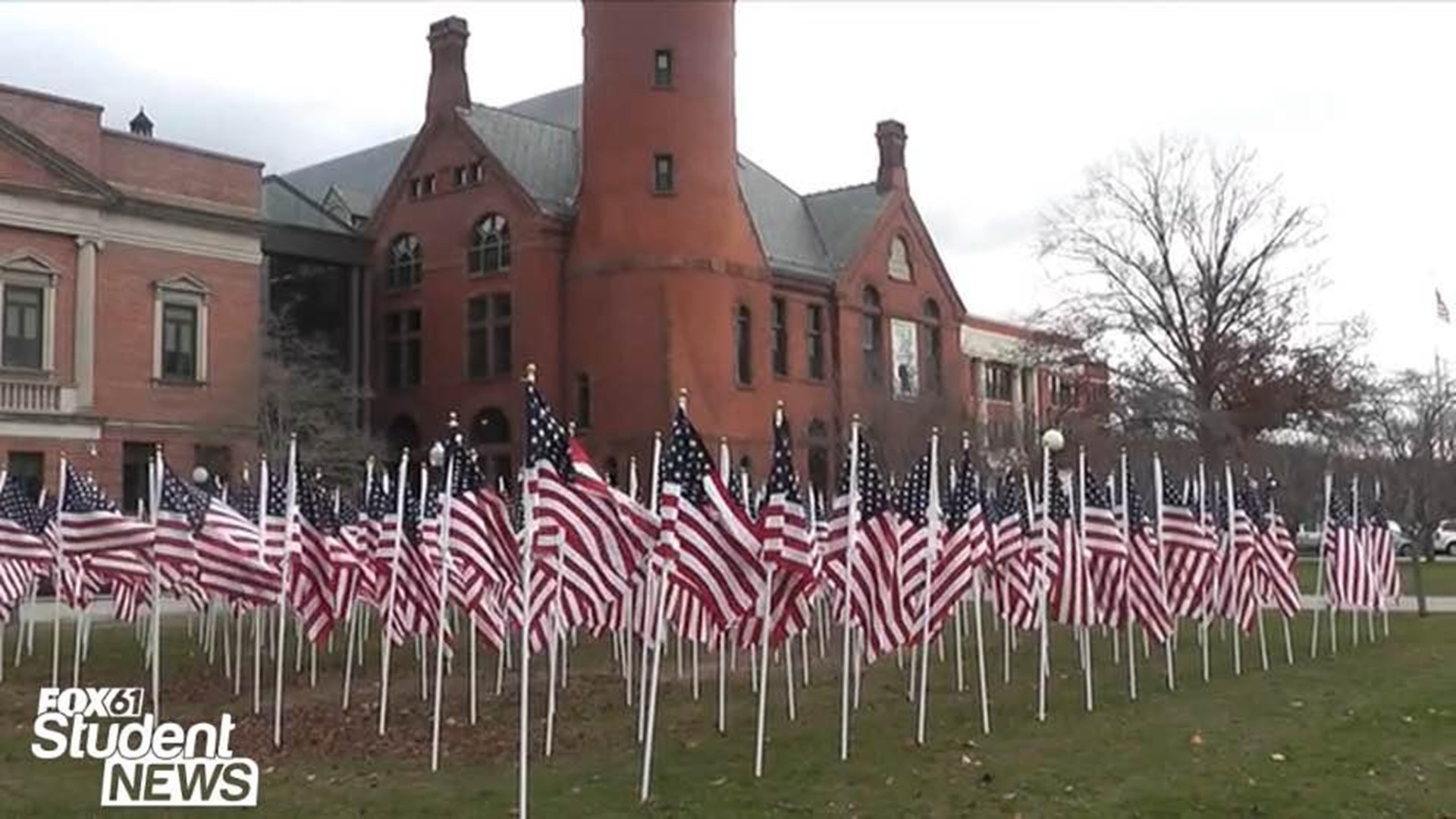 On Veteran’s Day, Norwich Free Academy honored both current and past service members with a display of over 170 American flags on its front lawn. For their second year, the school’s Supporting Our Servicemen and Women Club (SOS) paid respect to its town’s veterans by promoting sponsored flags. Each one cost twenty-five dollars, and all of the proceeds were donated to the military organization, Warriors for Warriors.

Former veterans, family members, and Norwich Free Academy staff and football players gathered to assemble the many flags on a Saturday morning. The week-long display’s set up began with the arrival of flags, staff poles, and zip ties for name tags. Tags that gave descriptions about honorees, such as their names, branch of service, years in the military, and war(s) in which they had served were attached to each flag. Next, the flags were properly folded and carried out to be staked into the ground. Despite the cold and windy weather, with the help of the volunteers, the display was able to be completed within a few hours.

Senior football captain, Adelino Daveiga, emphasized why volunteering was so important to him.

“They (the Veterans) fought for us, and now we have to help them try to get better. And [we have to] make sure everyday they wake up, that it’s not a struggle. They did something that’s great for us, so we have to make sure we do something great for them,” commented Daveiga.

The Warriors for Warriors association, according to Alyssa Pendleton, the SOS club’s advisor, provides “free service for holistic care to veterans with PTSD and other issues.”

“I know some veterans, for a fact, came out to our games, so coming out to this event and doing this for them show[s] our support for all that they’ve done for us.”

Pendleton was humbled to show her support, specifically for her father.

“The reason that I did ask to take over the club was because of [him]. Having my father [who] served in Vietnam and is a military veteran, I feel like… I was brought up to be even more appreciative of the flag-knowing how many lives have been sacrificed for our freedom here. [And] it means a lot to me, coming from a family that has a serviceman. So, I know that [my dad] is more than proud that I did [take over the club]. I am proud that I could do that for him and have him help [with this year’s Field of Honor display].”

“To me, [the display] is very heartwarming….I went to NFA back in the ‘60’s, and I do not remember [in] all of those years ever [seeing] NFA do anything like this…To see the precision and way that these flags are all laid out, is perfect. And, it’s such a privilege and an honor for us veterans to come up here and do this, because, you know, that’s what we try and defend.”