Protesters march through Bridgeport and shut down Route 8; two arrested

Activists calling for justice in George Floyd case moved from a park to the police station to the highway, closing it down in both directions 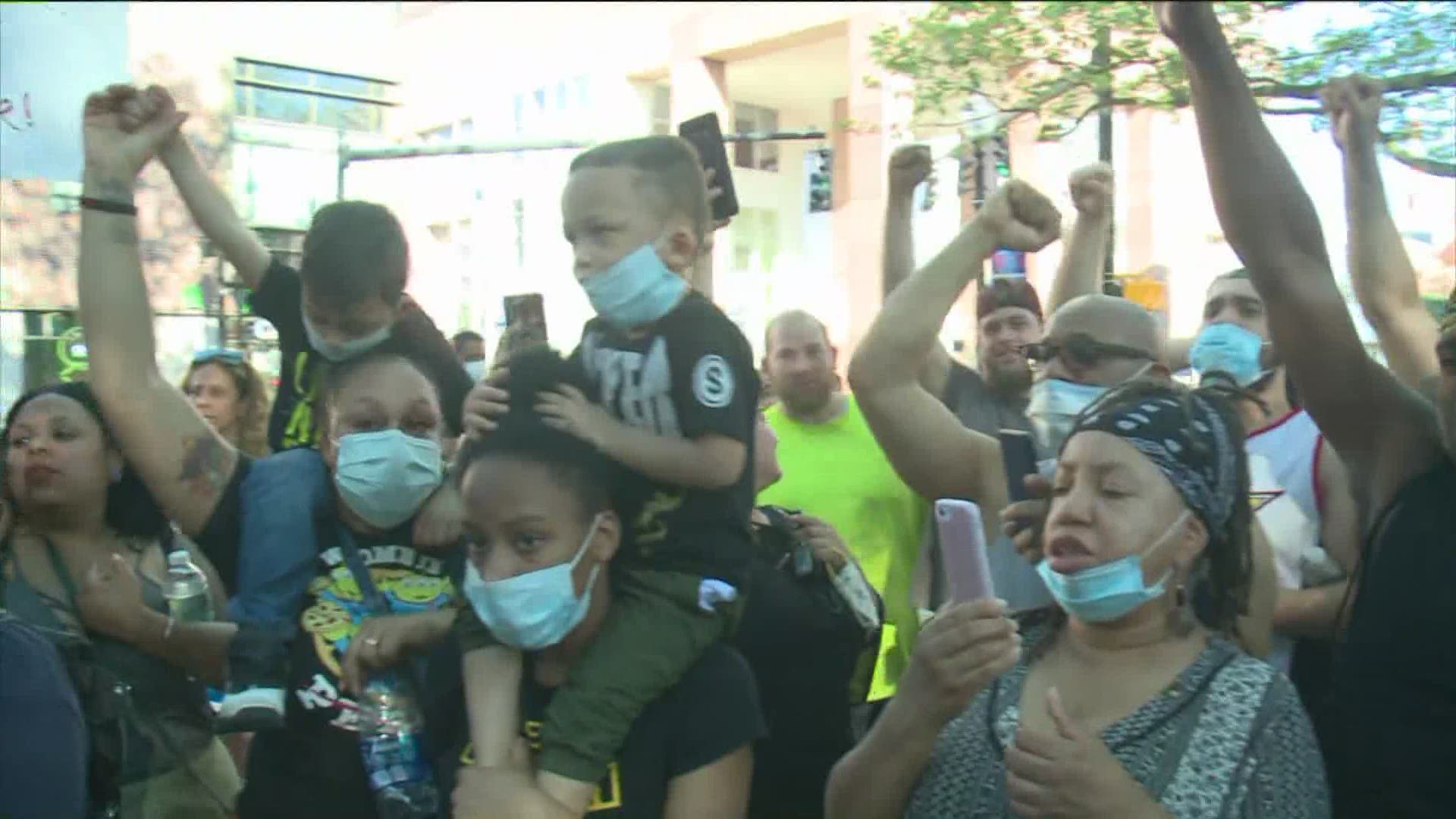 BRIDGEPORT, Conn. — People protesting police brutality and the death of George Floyd in Minneapolis closed down Route 8 in Bridgeport for over four hours on Saturday.

The protest in Bridgeport started peacefully at McLevy Green in the Park City, then moved to the Bridgeport Police Department where it grew in size and intensity.

Joe Grits said, “I requested to talk to the chief and they pepper-sprayed me, they wouldn’t let us go into the precinct, we just wanted to talk and it wasn’t the whole crowd it was a few of us.”

Police say protesters forced their way through the building's outer doors, and they twice requested protesters to leave the area, before deploying the pepper spray. They also say they announced that the pepper-spray would be deployed.

After the protest moved away from the police station is when the interstate was shut down.

Just as protesters moved to the highway, Bridgeport Police took to Twitter to say, it's "unfortunate that some came to interrupt community #solidarity.

FOX61 followed protesters on their march as they shared their frustrations about what’s happening nationwide and right here in Connecticut.

The activists joined many across the nation in showing outrage after the death of George Floyd in Minneapolis, Minnesota. Floyd died after then-Officer Derek Chauvin was seen on video kneeling on Floyd’s neck. Chauvin has been charged with 3rd-degree murder.

According to state police, the majority of the crowd dispersed after a short time, but about a dozen protesters remained on the highway, and it remained closed while the rest of the protesters returned downtown.

Aside from some water being thrown at police, the protest was mainly peaceful as many were seen marching all the way to the McLevy Green downtown sharing their message.

During the march, Jazmarie Melendez said, “We’re standing in solidarity with the protesters for George Floyd, but also to name the police department and all the corruption in Bridgeport.”

“We are in solidarity with what we see happening around the nation, but there’s a crisis of police violence right here in Connecticut and it’s in Bridgeport, it’s in New Haven, it’s in the rural and in the suburban areas, not just an urban city,” said Kerry Ellington.

Organizers say there is a history of police aggression toward black and brown people as they remembered 15-year old Jayson Negron who was shot and killed by officer James Boulay when officers were reportedly patrolling the city's west end three years ago.

Officer Boulay’s actions were ruled justified by a Connecticut State's Attorney. The family recently filed a federal civil lawsuit against the city.

Protestors say at the end of the day they just want peace.

Organizers and police remained calm throughout the demonstrations on Saturday, speaking to the resolve of the community for things not to escalate but still have their message heard.

As the protests wound down, State Police told the remaining protesters to clear the highway. Most did, but two did not, and they were then arrested without incident.

21-year-old Michelle Martinez of Bridgeport and 22-year-old Alia Cotton (of Castro Valley, CA were both charged with Use of Highways by Pedestrians, Breach of Peace 2nd Degree, and Interfering with an Officer. They were held in lieu of a $1,000 bond, and were released from custody about 10:30 p.m.

The city of Bridgeport sent out this statement:

We commend our Bridgeport Community for hosting a peaceful and meaningful protest today. Feelings of frustration & heartache are validated by what we saw, as to the need for change. We are united on these matters.

Our officers exhibited restraint and understanding throughout, as our community deserves the opportunity to share their voice and be heard.

It is unfortunate that some came to interrupt this show of community solidarity.