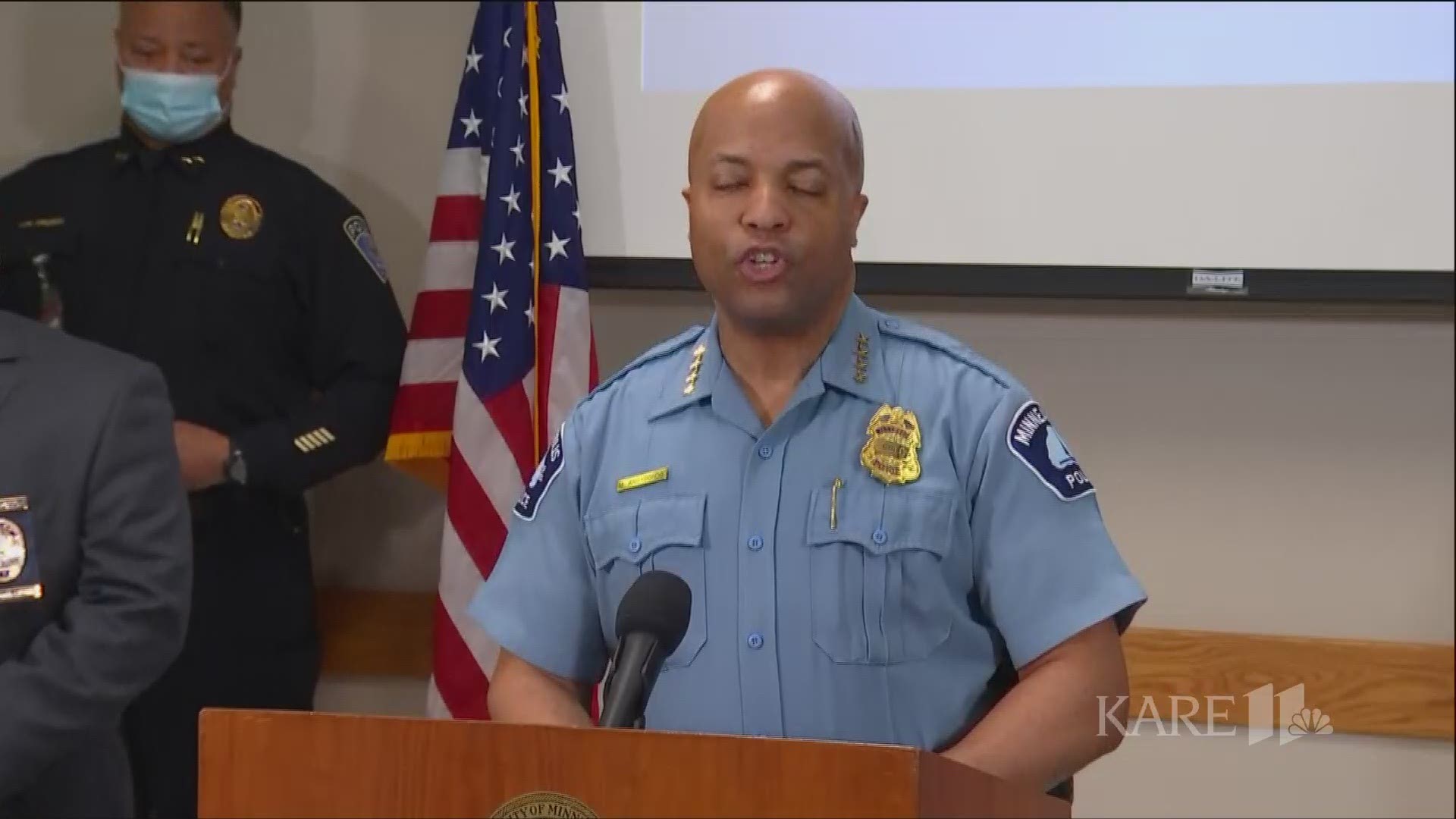 MINNEAPOLIS — Law enforcement leaders from the Twin Cities metro, the state of Minnesota and the federal government are assuring the public that they're ready to keep Minneapolis and St. Paul safe during the trial of Derek Chauvin.

Jury selection begins on March 8 for the trial of the former Minneapolis police officer, charged with second-degree murder and second-degree manslaughter in the death of George Floyd.

Floyd's death on Memorial Day 2020 spurred unrest and riots across the Twin Cities in the following days.

In anticipation of the trial officials formed Operation Safety Net, the task force coordinating to plan for safety and security measures.

Minneapolis Police Chief Medaria Arradondo spoke at a Monday afternoon news conference one week ahead of the trial start date. He said in the months of planning that have taken place already, there have been two goals.

“Prevention of damage to property and crimes, as well as also ensuring First Amendment constitutional rights for those who wish to peacefully assemble and demonstrate," Arradondo said.

Arradondo said police are "very confident" in the preparations they have made.

"One thing is abundantly clear, and that is everyone cares about our community," Axtell said. "At the end of the day, we all want a safe community." He says the multi-agency partnership is necessary with the task ahead.

"None of us are big enough to handle the issues in front of us," Axtell said.

Hennepin County Sheriff Dave Hutchinson said that his department will be in charge of court security at the Hennepin County Government Center, where the trial will take place.

The sheriff's office will provide intelligence gathering as needed “to help stop any sort of violence," Hutchinson said. He said they will use technology and social media to learn what organized groups are doing - and learn about any planned actions that are violent.

“This intelligence is going to make us be able to spend our resources where we need to," he said. "We are prepared as any city in America can be, and as prepared as we can be, to quell violence and destruction.”

Minnesota Department of Public Safety Commissioner John Harrington told the public Monday that the FBI and the Department of Homeland Security have informed him there are no direct threats at this time.

Harrington said there is a "significant amount of concern" about potential violence - enough to prompt the formation of the task force.

“You can’t stop a bad thing from happening unless you know it’s coming,” he said. "Our information is going to inform our decisions, and so as we move people into the right places at the right time it is going to be absolutely essential that we have good information."

Harrington and other public safety officials called on the public to report any alarming or suspicious activity they see.

Anders Folk, the acting United States Attorney for the District of Minnesota, joined the news conference and reiterated the commitment to both protection of people and property, and protection of the right to protest.

"Make no mistake, we welcome everyone's right to be heard," he said. "We cannot, however, allow violence and destruction."

Michael Paul, special agent in charge of the Minneapolis FBI Field Office, said his office has been an active participant in these security preparations since late last summer.

“The FBI will be actively supporting the collective law enforcement effort to protect the Twin Cities and surrounding metropolitan area,” he said.

Paul said the FBI will be providing support in three areas during the trial: intelligence, critical incident response and investigations. The primary expertise the agency offers, however, is intelligence.

"Threats can transition from aspirational to operational very quickly," Paul said. The FBI will be analyzing those threats and ready to act when they cross the threshold, Paul said.

Paul also reported that the FBI is "leveraging significant resources" for this trial, and that field offices all over the country will be sending helpful intelligence they have to Minnesota.

Drew Evans, the superintendent of the Minnesota Bureau of Criminal Apprehension (BCA), noted that the task force has resources dedicated at the state level to respond anywhere they are needed.

“We are not just focusing on the Twin Cities metro area," he said.

Col. Matt Langer with the Minnesota State Patrol acknowledged that there are barriers going up across the city, and that some people have voiced concerns about the sweeping level of the response from law enforcement.

"We hear you," Langer said. "We just ask that you remember what it was like in May and June, remember the property destruction, remember the violence, remember the challenges that prevented people from coming to express their First Amendment rights."