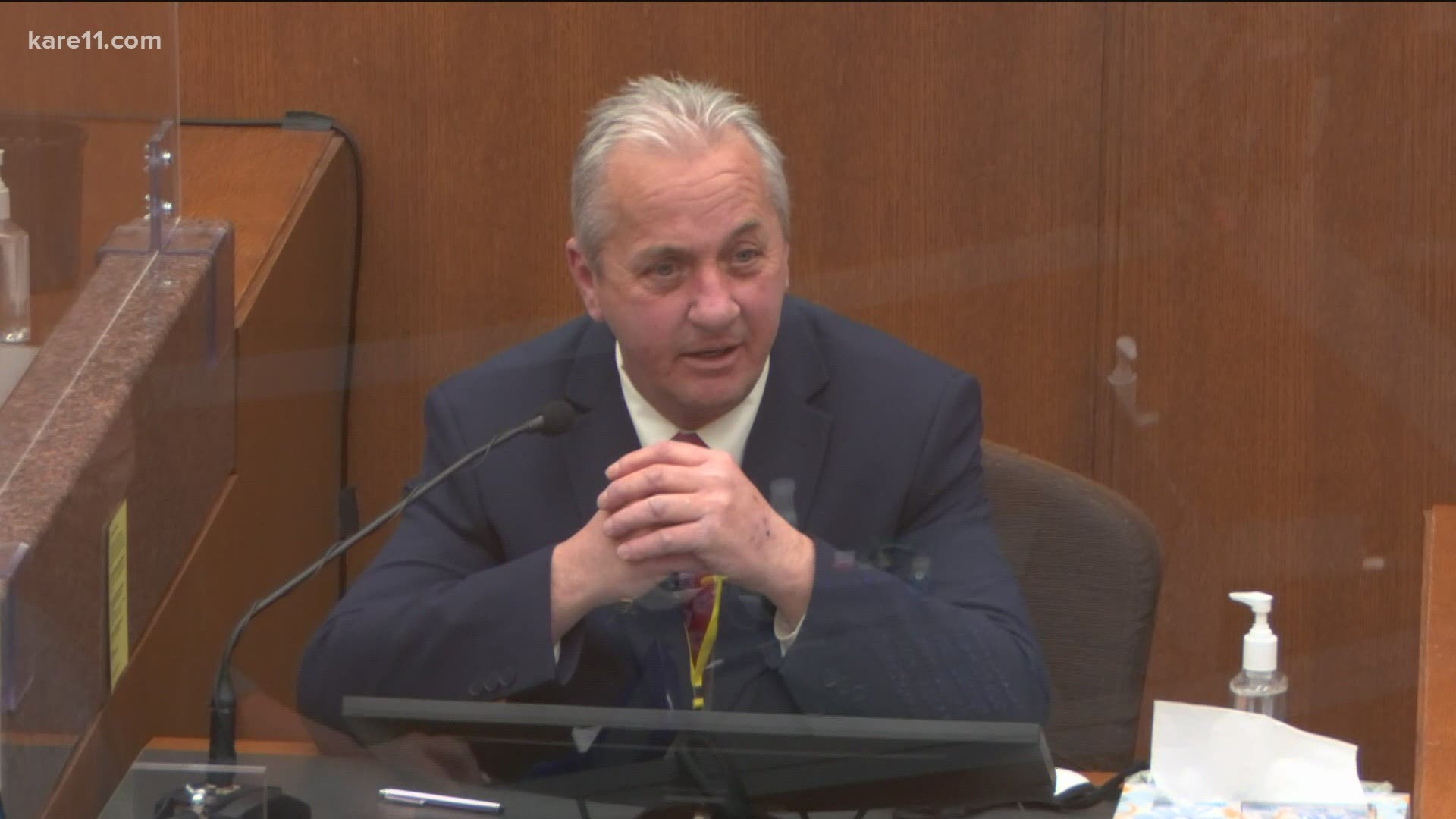 MINNEAPOLIS — Without ambiguity, Minneapolis Police Lt. Richard Zimmerman denounced Derek Chauvin’s actions during his testimony on Friday, telling jurors on the fifth day of the murder and manslaughter trial that the former officer’s restraint of George Floyd was “totally unnecessary.”

Carrying a calm, straightforward demeanor, Zimmerman introduced himself to a worldwide audience with his powerful testimony against a former co-worker. Eugene Robinson, a longtime Washington Post columnist, described Zimmerman’s words as “utterly devastating” for Chauvin’s case, and throughout the morning, verified Twitter accounts pushed out moment-by-moment recaps of the lieutenant’s testimony. By lunchtime, anyone following the trial would know that Zimmerman’s name is pronounced “Zimmer-MAN,” as he clearly stated to Judge Peter Cahill shortly after taking his oath.

Without mentioning him by name, Lt. Zimmerman -- the head of homicide -- is testifying that everything Chauvin did was wrong. He told the jury that officers aren't trained to kneel on the neck, that prone position can be dangerous, and that medical care should be provided ASAP. https://t.co/yEhzoUgsPP

But Zimmerman, chief of the homicide unit, needed no introduction in the city of Minneapolis, where he has worked as a sworn member of the police department since 1985. With his 36 years of experience, Zimmerman ranks atop the Minneapolis Police Department’s seniority list – “I hate to say that, but I am,” he added for the jury when questioned by prosecutor Matthew Frank.

For that reason, Zimmerman’s testimony may carry extra weight with jurors, even though defense attorney Eric Nelson seemed to paint the homicide chief as out-of-touch with patrol duties and pushed back against some of his claims that Chauvin had no authorization to use force against Floyd for so long. While testifying, Zimmerman often looked directly at the jurors – a striking contrast compared to the 18 other witnesses called so far by the prosecution – and he seemed at ease answering questions in a courtroom setting.

Known for his formalwear clothing at crime scenes, Zimmerman responds to death investigations at all hours of the night – including 38th and Chicago on the evening of May 25, 2020, when he arrived about a half-hour after George Floyd had been taken away in an ambulance. Zimmerman, unaware of the specific details of the event at that time, approached officers Thomas Lane and J. Alexander Kueng before determining they were “involved officers” and needed to go to City Hall for an interview.

Zimmerman has worked homicide cases at MPD since 1995, and he has served as the lieutenant in charge of the unit since 2008.

“I get called for every death,” Zimmerman said while giving background testimony on Friday, “where it’s clearly a homicide, where officers have any question about how someone may have died. I go out to the scenes and supervisor other officers.”

Zimmerman told jurors on Friday that he started working homicide cases in the mid-1990s after the department expanded the unit in response to rising violent crime. Prior to joining the homicide team, Zimmerman served as a sergeant investigating adult sex crimes. He chose an investigative role as a career path after working as a patrol officer from 1985 to 1993, including three years on a dedicated “crack team” during the crack epidemic. Zimmerman also worked at the Fillmore County Sheriff’s Office from 1981 to 1985.

Although jurors heard only basic details about his background, Zimmerman is often quoted in the news media as a longtime homicide investigator. In 2005, local media outlet The Journal described him in a profile piece as a “suit-and-tie man who looks like he might have walked off the set of ‘Law and Order.’” The article, still available online, mentioned that Zimmerman grew up in Greater Minnesota but decided to live in downtown Minneapolis starting in 1986.

But the prosecution did not call Zimmerman to the stand to talk about his personal life or his duties as a homicide chief. Rather, the state presented him as an experienced, dedicated public servant who, after all these years in law enforcement, does not condone the actions of Derek Chauvin on May 25. In fact, Zimmerman had already signed an open letter stating that “Derek Chauvin failed as a human and stripped George Floyd of his dignity and life.”

Chauvin’s defense attorney will have a chance to call witnesses later in the trial, and only the jurors can say how much credence they’ll give Zimmerman’s testimony.

But it became clear, shortly before the close of court on Friday morning, that the state wanted to send jurors home for the weekend with Lt. Richard Zimmerman giving the final word.

“Did you see any need for Officer Chauvin to improvise by putting his knee on Mr. Floyd for 9 minutes and 29 seconds?” prosecutor Matthew Frank asked.