A large tree hit the home directly over the front door, damaging the roof and part of the home's structure and severely damaging the barn next door 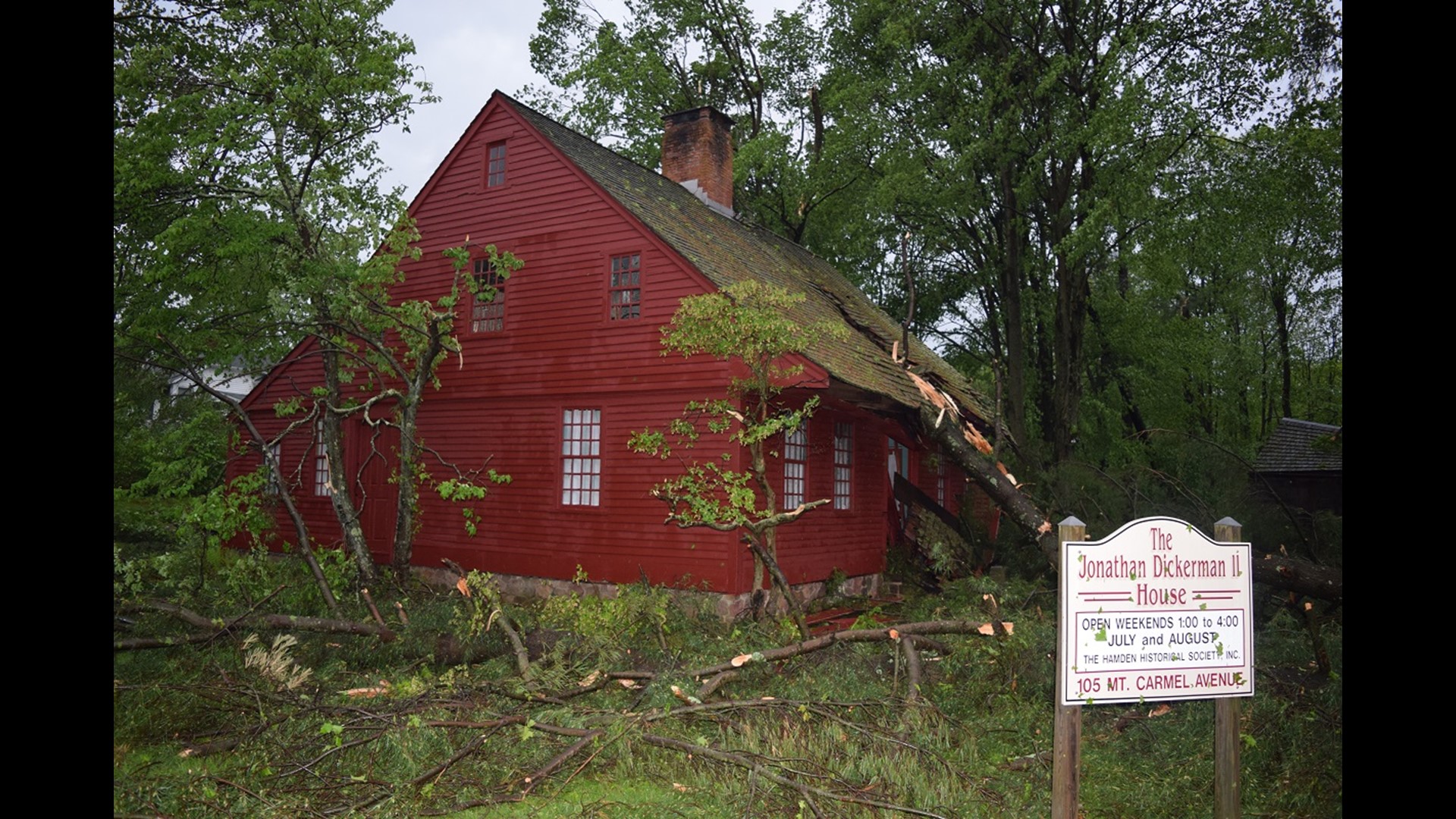 HAMDEN, Conn — David Johnson and his wife Barbara noticed the skies over Hamden getting dark on that May afternoon in 2018.

"I remember saying to my wife, "Gee, I wonder if we're going to get a tornado," recalled Johnson, Hamden's Municipal Historian, as he saw rain going sideways. It brought back memories of the damage caused by the 1989 EF 4 tornado that struck the town, wiping out homes and businesses.

What he didn't know was the damage happening at that moment to the Jonathan Dickerman II House, located in the shadow of Sleeping Giant State Park and next to the campus of Quinnipiac University.

The home, a well-preserved example of late Georgian architecture was built in the 1790s. It had been lived in up to the early 1900s, and then was part of the Sleeping Giant State Park. In 1961, it was acquired by the Hamden Historical Society, moved across Mount Carmel Avenue to its present location, and restored. The home was open for tours on the weekend and housed numerous antiques.

"And all of a sudden, everything calmed down and I got a call from my brother, who lives in the north end of town, and a friend of his had reported to him that huge tree had fallen on the Jonathan Dickerman house. Well, that just knocked the breath out of me," said Johnson, the Hamden municipal historian.

The storm that ripped through the area caused extensive damage to the state park and forced it closed for over a year. It also felled a large tree that hit the home directly over the front door, damaging the roof and part of the home's structure.

1 / 31
Hamden Historical Society
Repairs to the Jonathan Dickerman House in Hamden after a tornado damaged it in 2018 have been completed and the house is re-opening to visitors.

After the call, Johnson and his wife drove over to the home to check on the damage.

"We managed to get as far as the Quinnipiac campus, there were falling trees everywhere. We parked our car at the side of the road and hiked and there were falling wires every everywhere," he recalled. "And I approached the house from its rear, and it looks good. I thought, 'Oh, wow, I hope this was just an exaggeration.'"

He continued: "When I got around to the front of the house, you can see that this huge pine tree had fallen squarely over the front door and crashed the roof. And, of course, it was gut-wrenching. So I had my camera with me, I took a bunch of pictures from all different angles and whatnot, and as well as the barn, which looked like it was just totally destroyed. And it was like, where do we go from here?"

The historical society embarked on a three-year journey to restore the home, with the help of master craftsman Bob Zoni, who Johnson said performed a miracle.

Zoni and other's first task was to remove the tree, cover the hole in the roof, and assess the damage. Once the restoration began, it was a complex task.

"[Zoni] found the original kind of wood, he was actually able to repair some of the major skeletal structures of the building's heavy timbers with epoxy," Johnson said. "So, they were actually stronger than before, sort of like a broken bone that gets mended."

Historic barn in Hamden restored after being damaged in 2018 tornado

The nearby barn, which also was seriously damaged, had to be disassembled, repaired and reassembled. It had been moved to the site in 1992.

"They literally put it back together again, like a jigsaw puzzle of the uprights, the siding. Very few pieces had to be replaced," said Johnson. But those were replaced, were replaced by the same kind of wood that was originally used."

A smaller tornado that came through in 2020, caused some more damage when another tree struck the building.

The cost was covered through insurance, grants and fundraising.

The Historical Society will officially reopen the buildings for the public to tour later this month.

"I know that those who come to visit it will be amazed at the job that was done. Actually, it may not be that easy to perceive, because it's hard to see, if not impossible to see, that it was in that shape," Johnson said. "But you see the pictures, the before pictures, and you see how it is today. It's just amazing. Just amazing. Yeah, I feel pretty good about it. I think the rest of the Historical Society goes to very grateful for the job that [Zoni] did."

The grand re-opening will be at 105 Mount Carmel Avenue in Hamden on Sunday, August 29 at 1 p.m. The public is welcome and light refreshments will be served.