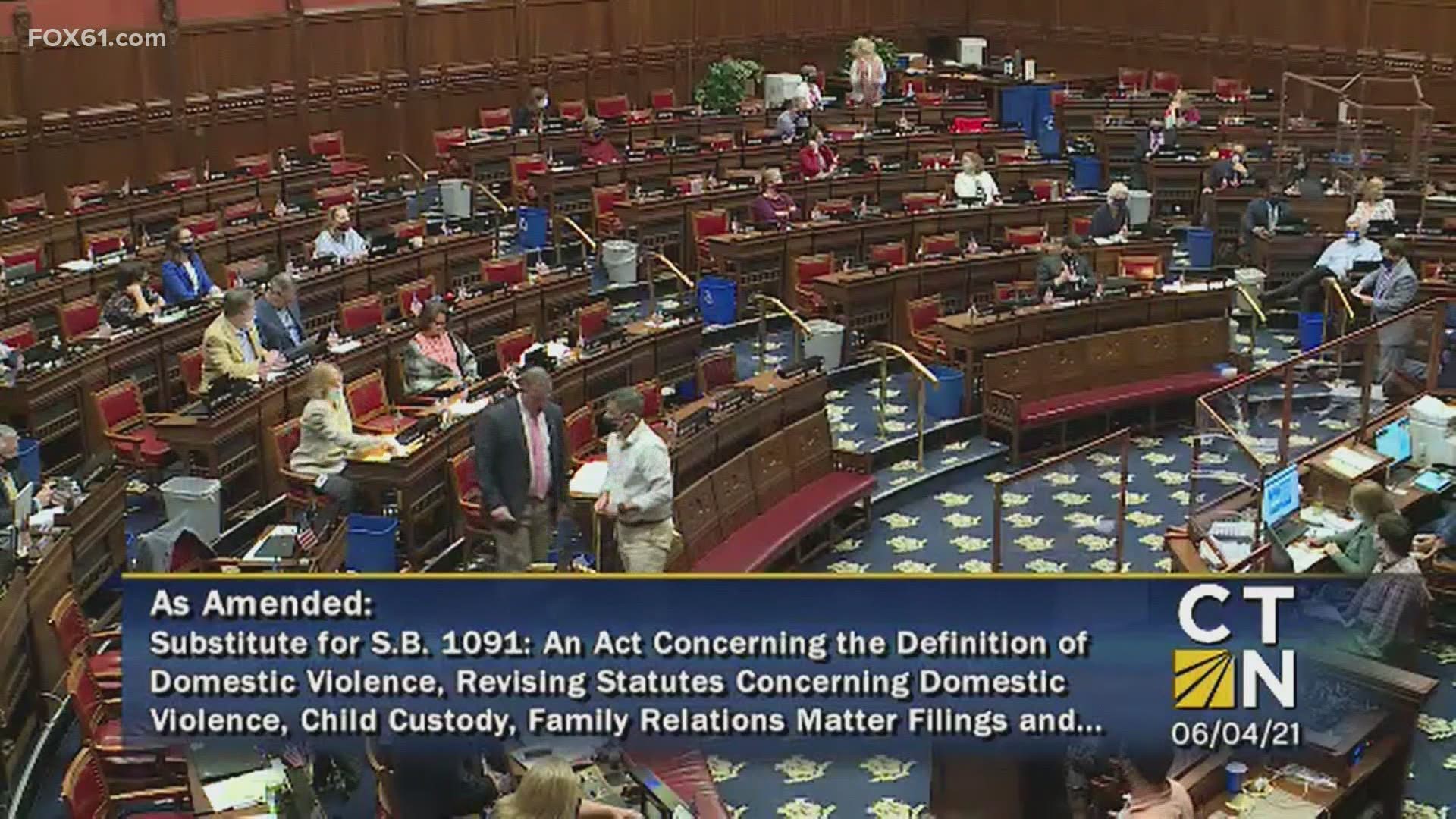 HARTFORD, Conn. — Senate Bill 1091, otherwise known as "Jennifers" Law" passed the Connecticut House of Representatives Friday on a final vote of 134 to 8.

Introduced in February, SB 1091 would add coercive control to the definition of domestic violence as well as put child safety as a priority in custody cases by making domestic violence the first factor to consider, a lawmaker said.

"This legislation will save lives, plain and simple. The changes in this bill will be a lifeline to the more than a third of all Connecticut women who will experience some form of intimate partner violence or stalking in their lifetime. It's the result of years of input and experience and advocacy to give victims the tools to leave abusive relationships and hold their abusers accountable," Senator Mae Flexer (D-Killingly) said. "For years, our neighbors facing domestic violence have dealt with obstacle after obstacle in order to escape from an abusive situation. The bill eliminates many of those obstacles and it represents our commitment to the citizens of Connecticut to protect them, and to make their lives better."

UPDATE: Jennifer’s Law passes the House with a vote of 134-8. It’ll now head to the governor’s desk.

Survivors of domestic abuse gathered for a rally in front of the State Capitol Friday morning and all wore purple to show their support for the legislation that will protect victims of abuse.

"You can’t make up the way - the system does not work for victims at all and we are not saying this is only against women but primarily this is a cause against women," said Christine Cocchiola, an advocate of Jennifer's Law.

The bill received support from both sides of the aisle.

"What we saw tonight was a bipartisan measure that I think I’ll go a long way toward helping women in the state of Connecticut," State Rep. Jason Perillo, (R-Shelton) said.

The bill was initially introduced in response to the death of 42-year old Jennifer Magnano, the Terryville mother of three who was shot dead in 2007 on the front steps of her house in front of her children.

Her abusive husband, Scott Magnano had shot and killed her and then turned the gun on himself

Fourteen years later, Magnano's daughter, Jessica Rosenbeck was at the rally to help change the system in honor of her mother.

"Physical violence is obviously very damaging but those wounds heal. Bruises heal. Broken bones heal. The kind of effects of coercive control is so long-lasting and so hard to heal from," said Rosenbeck.

Jennifer Dulos' name was also added to the bill. Her sudden disappearance sparked a search that spanned to neighboring states and her estranged husband became the focal point of the investigation.

Governor Ned Lamont's office said they will be reviewing the bill once it reaches his desk.