Video shows a suspect wearing a mask, swinging an ax to a door of the Greater Middletown Military Museum 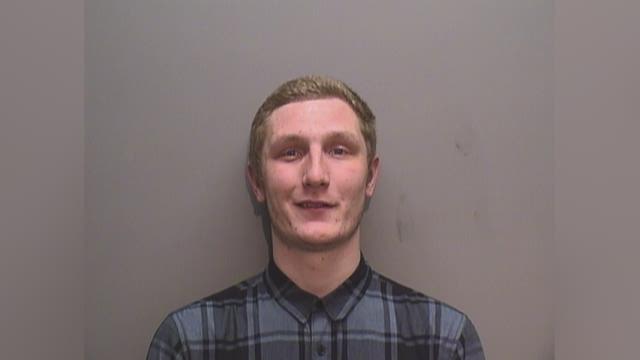 MIDDLETOWN, Conn. — Police say they have made an arrest for a break-in that occurred early Tuesday morning at the Greater Middletown Military Museum.

Officials said Thursday a person of interest was taken into custody on separate charges, following the investigation of a different home burglary in the same neighborhood Wednesday night.

He was charged with 3rd-degree Burglary, Possession of Burglary Tools, 1st-degree Criminal Mischief and 6th-degree Larceny and is being held on a $100,000 bond.

Video shows Nemecek wearing a mask, swinging an ax to break the handle on the back door of museum.

According to a release, Nemecek already had two failure to appear warrants when he was taken into custody.

Middletown officials initially said the two burglaries were linked, but now say the home incident is still under investigation.

During investigation, officers were able to recover an item from the museum burglary.

Police say when Nemecek was unsuccessful at the back door, they turned attention to the front of the building busting through two sets of glass windows.

"It’s a really remarkable place," said museum volunteer Joan Liska. "We are just so upset that someone would do that to us."

The shattered glass covered the floor of the museum when Liska arrived Tuesday morning. Surveillance footage captures a hooded Nemecek by the back door trying to get in.

"He left a lot of broken glass around. Broke into one of our display cases and took a few items out of it," said museum president Ken McClellan.

McClellan was alerted of the break-in when alarms triggered around 4 a.m. The museum is lined with donated uniforms and items from Middletown Veterans. The artifacts are used to tell their stories to ensure their legacy lives on forever. McClellan says they are thankful that nothing else was damaged.

Middletown police responded to the property quickly. They sent a K-9 unit out to track the thief’s movements.

"They did not locate the suspect at the time but they were able to gather evidence which was very well needed," said Lt. Heather Desmond.

The track led to the area behind Veterans Memorial Park near Barbara Road. Middletown Police are asking people who live nearby to check their home surveillance cameras for any sign of the suspect.

"This is probably one of the most disrespectful things that someone could do is to break into the museum and disrespect our veterans," said Lt. Desmond.

Volunteers at the museum say the community has stepped up to help them recover through donations. One local business has already offered to repair the glass.

"The volunteers are coming trying to help us get right back up. That’s what military do. They support each other," said Liska.

Middletown police are asking anyone who may have any home surveillance in the area to review their footage between the hours of 10 PM Monday to 7 AM Tuesday.

The Greater Middletown Military Museum is run entirely by volunteers and donations. If you would like to donate to the museum head to www.gmvmm.com