Portsmouth Police Chief Angela Greene explained her reasons for starting a criminal investigation into a protest that led to felony charges against 14 people. 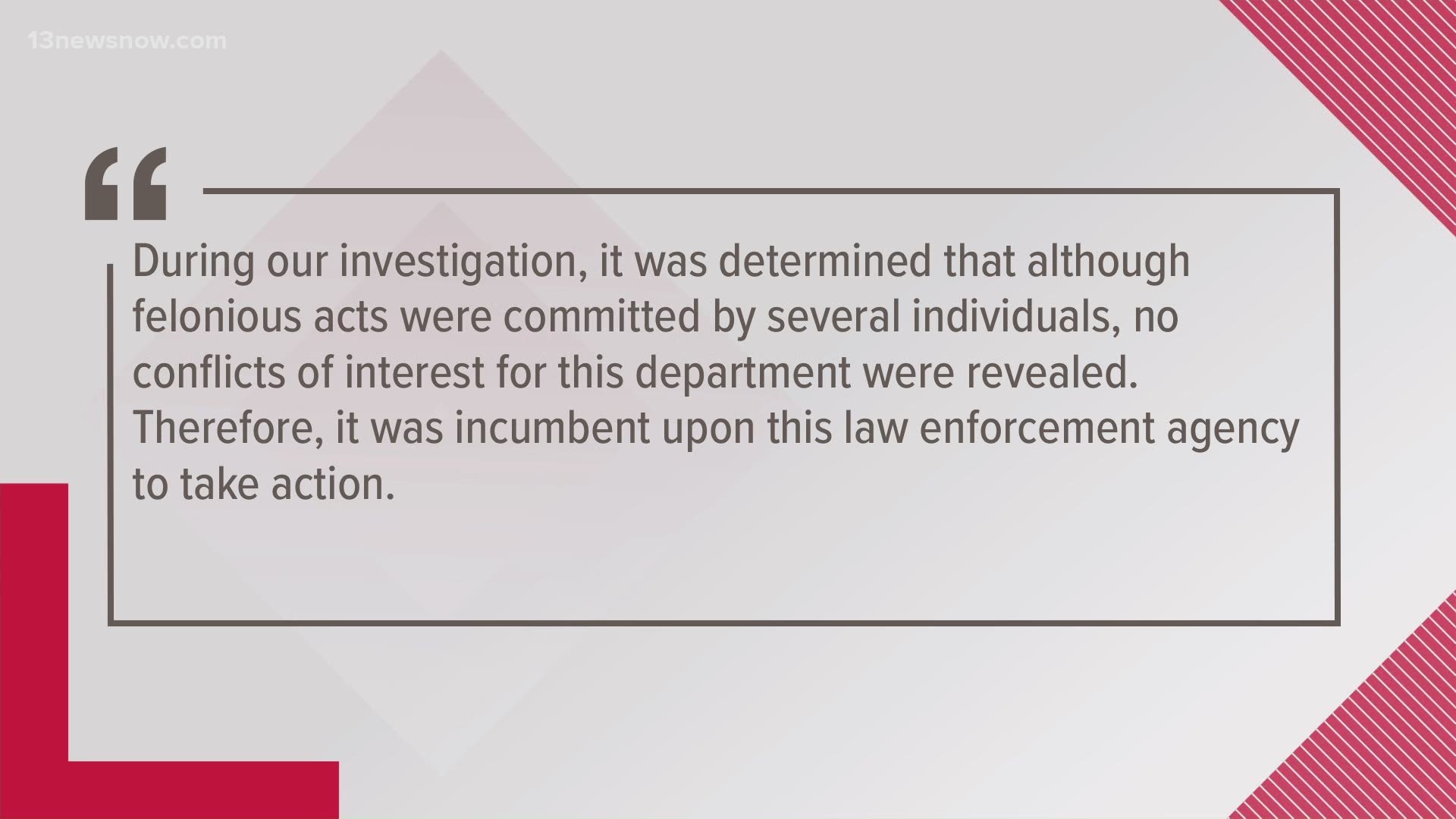 PORTSMOUTH, Va. — Portsmouth Police Chief Angela Greene is answering for why her department investigated and filed arrest warrants against state Senator Louise Lucas and more than a dozen other people.

Greene released a statement on Thursday after announcing earlier this week that police took out felony warrants against Sen. Lucas, head members of the Portsmouth NAACP chapter, a school board member and a number of city public defenders.

Those people along with a number of other individuals were charged with felony injury to a monument and conspiracy to commit a felony stemming from the June 10 protest at the Confederate monument in Olde Towne.

Following Monday's press briefing where Chief Greene took no questions, many wondered why police thought it necessary to seek those warrants or even start a criminal investigation, believing that all who were charged were targeted unfairly.

In her statement, she mainly tries to clear up any confusion over a conflict of interest that Portsmouth city leaders claim should have hindered police from pursuing a criminal investigation.

Greene also explained how her office ended up investigating the protest and briefly touched on why she proceeded with the charges, citing the oath she took to uphold the Constitution and execute her duties to investigate crimes.

Read the full statement below.

This statement is in response to the allegations that the Portsmouth Police Department had a conflict of interest in regards to the incident that occurred at the confederate monument on [June] 10, 2020.

Before a comprehensive investigation was initiated by my agency, I attempted to have outside law enforcement agencies investigate the incident to ensure no conflict existed. Let me be clear, it was the initial belief that upon the commencement of a full investigation into this criminal matter that a potential conflict involving elected city officials, who were present at the time, may arise. Therefore, other avenues were sought.

And after all efforts were exhausted to have a special grand jury appointed or an outside agency investigate the matter, it was evident that the investigation would be left up to our agency. It then became the sworn duty of the Portsmouth Police Department to begin the comprehensive investigation, until such a time that an actual conflict arose in this matter.

During our investigation, it was determined that although felonious acts were committed by several individuals, no conflicts of interest for this department were revealed.

Therefore, it was incumbent upon this law enforcement agency to take action. As you know, we utilized our traditional method of seeking warrants through the magistrate, once we determined that the Commonwealth Attorney could be called as a potential witness in this case, which precluded her office from receiving and reviewing a complete investigative file in this matter.

I am aware that there are questions as to why my office investigated the destruction of the monument and proceeded with charges against the known offenders. My answer is simple, upon taking my oath of office when being sworn in as a law enforcement officer in the City of Richmond and then upon being sworn in as an Assistant Chief and then Chief of Police for the City of Portsmouth, I vowed to uphold the Constitution of the United States and the Constitution of the Commonwealth of Virginia; and promised to faithfully and impartially discharge all the duties incumbent upon me, to the best of my ability. As the head of the primary law enforcement agency in the City of Portsmouth, it is my obligation to investigate all crimes that have occurred, and when probable cause exists, present that evidence for the prosecution, which is what was done in this matter.

On Wednesday, the Martin Luther King, Jr. Leadership Steering Committee held a press conference demanding that Greene immediately resign from her position and called on the Virginia State Police to investigate the Portsmouth Police Department. The group is made up of several faith leaders and community activists from around the city of Portsmouth.

Following the release of Greene's statement, the group released a statement of their very own echoing the same sentiments they shared on Wednesday:

The MLK Leadership Steering Committee has lost confidence in Chief Greene and ask for her immediate resignation or termination. With many conflicts, The Portsmouth Police Department has attempted to manipulate the legal process and criminalize protests. Although we are skeptical of the criminal justice system at this hour, we trust Commonwealth's Attorney Morales judgement and high ethical standards. As one of the leaders in criminal justice reform, we know that she will do what is in the best interest of fairness, equity and justice for the city of Portsmouth.