Over 100 students along with a few teachers stood on the football field and read their self-written speeches. 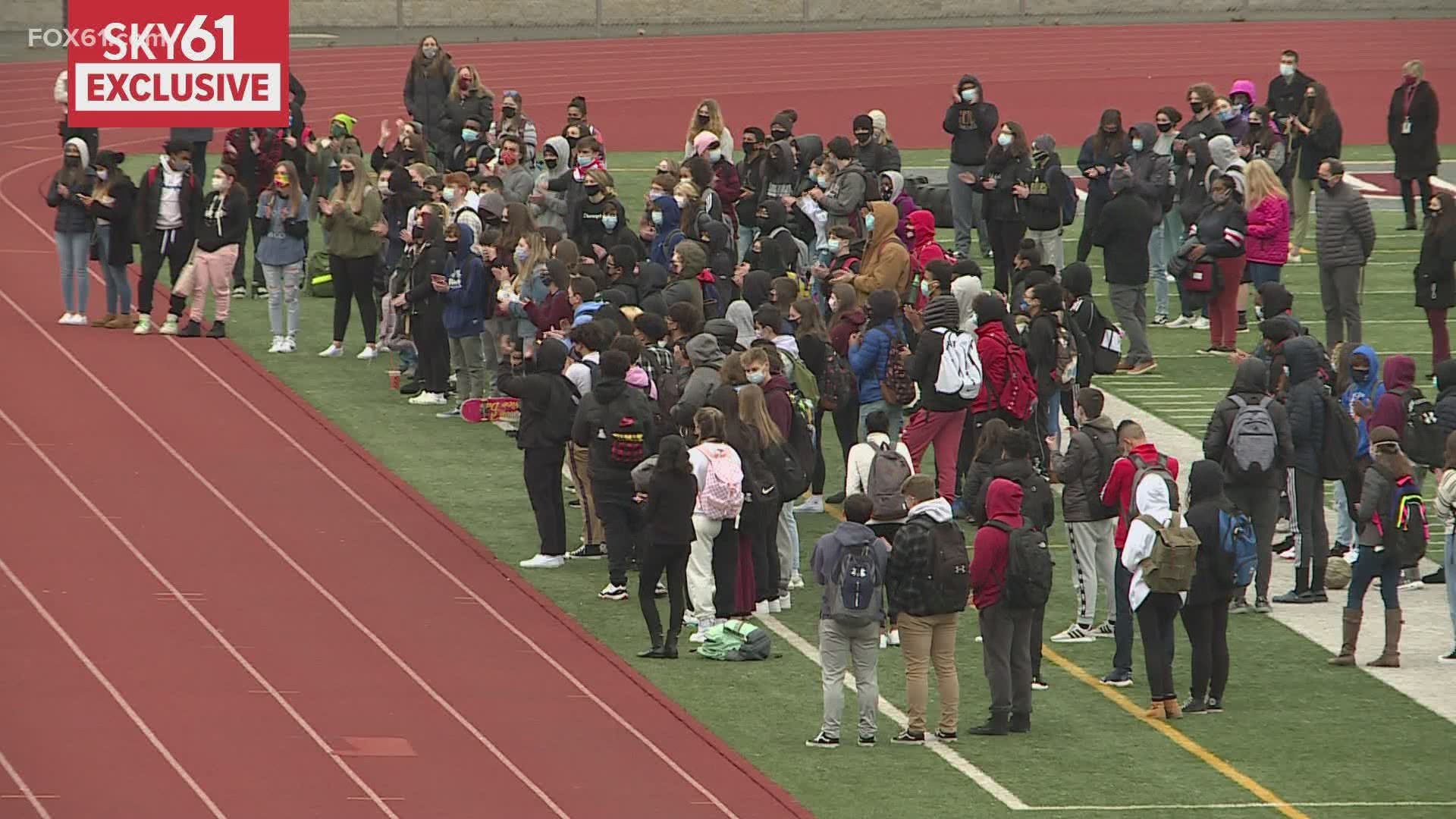 NAUGATUCK, Conn. — Sky61 captured an exclusive video of a school walkout Tuesday. It was a show of unity in response to some racist messages from two years ago just now coming to light.

The messages made reference to police shootings and black people.

The girl accused of sending the messages is the daughter of the town's police chief and high school's associate principal.

Over 100 students along with a few teachers stood on the football field and read their self-written speeches.

One of the students who participated in the walkout was Student Council President Munthanu Emilah who said racism hits deeply for her as she was a victim herself when she used to wear a hijab.

Emilah alleges her incident was swept under the rug by school officials and does not that want that to happen to anyone else.

"The fact that something like this had to be made public for the public eye to demand answers, for them to finally open up and show us that they are taking action is pretty upsetting," said Emilah.

The teen accused of sending the messages in question has parents with high-ranking positions.

Her father, Steven Hunt is the police chief of the Naugatuck Police Department and her mother, Johnna Hunt is the assistant principal of the high school.

Over the weekend, they released a lengthy letter to the community that said in part:

"While we fully intend to hold our daughter accountable for her mistakes, we will continue to offer her the same unconditional love any parent would show a child who has erred but showed remorse."

Students, however, said they are waiting for the teen to face punishment and for the parents to apologize.

"Not once did they apologize. They were just blaming it all on her. It was her fault. She did everything - they had nothing to do with it," said Damian Lavertue, a sophomore.

"It's not going to stop. Racism has been around for a long time. we just need to do something about it. For people who are racist, you need to be held accountable," said Keymury Awala, a freshman.

Amari Brantley with the Waterury NAACP Pride Youth Council said the teen should be held accountable.

Mayor N. Warren Hess released a joint statement last week with the police department and it read in part:

"We are currently gathering information internally and are also in the process of bringing in assistance from the outside to conduct a comprehensive and independent investigation."

Students will hold a community march Wednesday starting around noon where they will march from the high school to the green.

"We can confirm that representatives from The Borough met with members of the NAACP tonight and had a productive conversation. The dialogue will continue in the coming weeks and we will provide updates as additional information becomes available."