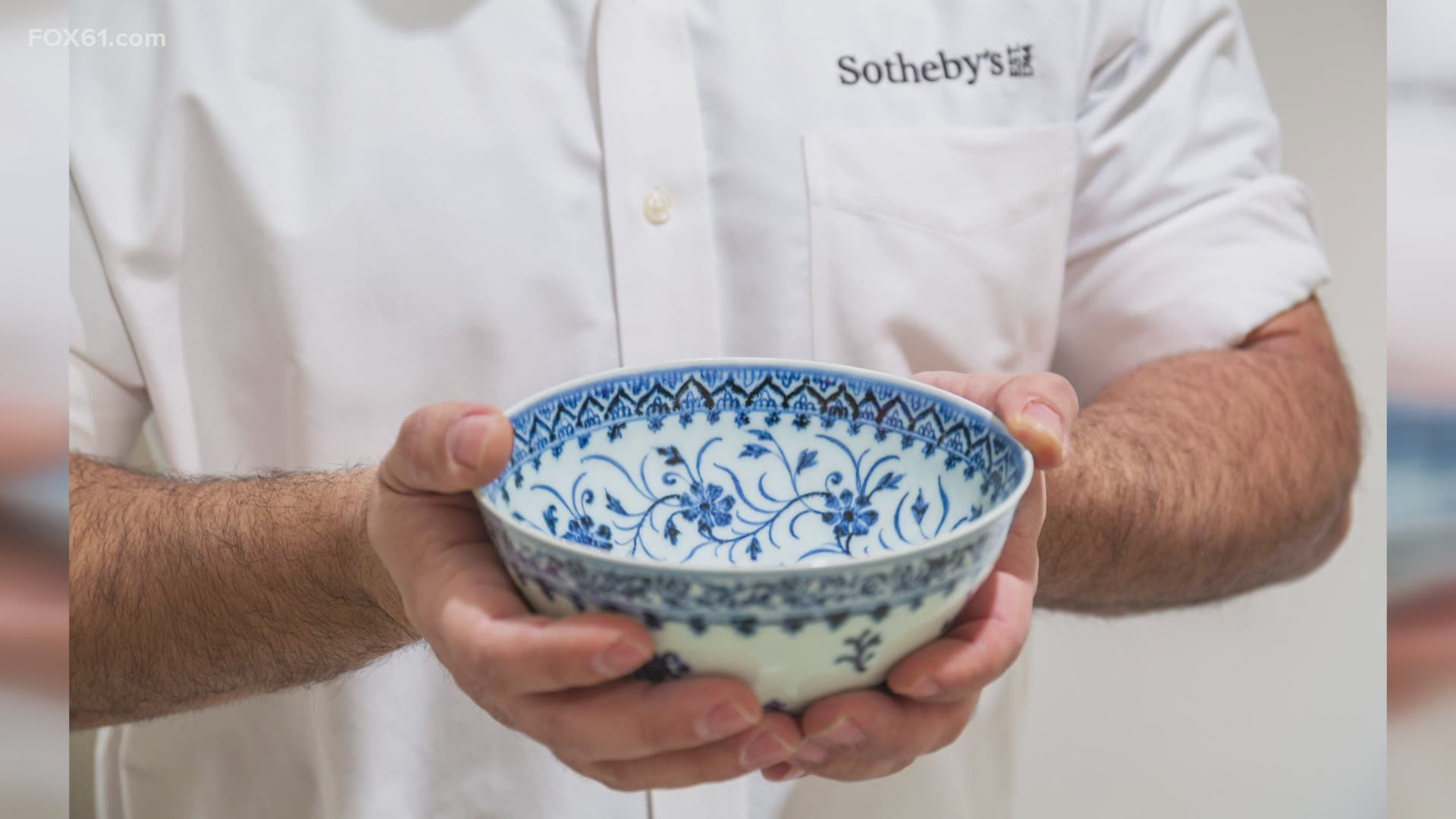 NEW HAVEN, Conn. — A yard sale discovery in Connecticut is now a major treasure and valued at up to half a million dollars.

Experts shared ways to determine if a garage sale antique could be worth a whole lot more.

“As soon as we saw images of this we immediately knew it what it was,” said Angela McAteer, Senior Vice President Head of Department for Chinese Ceramics and Works of Art at Sotheby’s in New York.

“The bowl itself dates to the early 15th-century product made during the reign of the Yongle emperor who certainly in terms of Chinese history is one of the all-time great emperors,” McAteer said.

She said blue and white porcelain production reached its zenith during his reign.

“The bowl itself was made during these years so we’re looking at between 1402 to 1424 for the early Ming imperial court,” McAteer said.

McAteer said she is unsure how the bowl drifted west, but a gentleman found the bowl at a yard sale near New Haven last fall.

“It’s completely unknown to us and a little bit of a frustrating mystery how,” she said. “This piece would have journeyed from one of the courts of the early Ming empire to a flea market in Connecticut.”

She said the unnamed buyer was not an artist, but had an eye for antiques and knew there was something special about it so he tried to identify it and then reached out to Sotheby’s.

Portrait painter Serge Strosberg said the internet makes it easy to research a work of art.

“Google has a function called google image search where you basically upload an iPhone shot of whatever you have and then it compares it to whatever is on google,” he said. “Whatever similar there is, it can help you identify what you have. Then if nothing shows up then you should probably go to an auction.”

Strosberg studied art in Paris and has painted for over 20 years.  His specialty is oils with egg tempera on canvas.  He displays and sells his work at studios in SOHO in New York and in Palm Beach.  He has been asked to verify the authenticity of paintings on several occasions because of his skill.

He said to do research and the more information you have the better chance you have of selling it and the piece being accepted.  He said auction houses do not accept all submissions and some charge.  He said its important to have good photographs of the back and sides of the item, a close-up of the signature of the artist, a copy of where it was bought and proof of sale.  He said he previously sold paintings with Sotheby’s.

McAteer said Sotheby’s has a complimentary service to give appraisals and a handy website.

“Even if it’s not an area that you feel that you have depth of knowledge in, quality is sort of universal and if a piece is beautiful and it’s well-made, then it’s very likely of interest and of value,” McAteer said.

The bowl will be presented into the international market in Sotheby’s Important Chinese Art Auction on March 17.  Proceeds will go to the seller and Sotheby’s will receive a commission.

The bowl will also be featured in exhibitions for Sotheby’s Asia Week, open to public with appointments.  Sotheby’s website has additional details.